I’ve Found My Holy Grail Of Headphones: The AKG Q701

The search for the perfect headphones can feel like a never-ending journey. And since everyone has different tastes, it’s impossible for someone else to recommend the perfect cans for you. But world be damned, I’ve found mine, and I’m never giving them up.

Every audiophile’s headphone journey is different, but it usually goes a little something like this: Buy cheap pair of over-ear headphones. Be blown away. Get sucked into the world of headphones by buying something a little more expensive. Then maybe your tastes change, or you get bored, and you get something even more expensive. Then maybe you get a headphone amp. et cetera, et cetera, all the way til the end of time and the bottom of your wallet.

But my search is over. I’ve tried more headphones than I can actually name, through various purchases and Head-Fi meetups, and I can’t find any that I love more than my treasured AKG Q701. I’ve owned it for two years, and while wasn’t perfect out of the box, I have no intention of ever upgrading to anything else.

My goal with this post is twofold: Share what I consider to be my holy grail of headphones, and to help you find yours.

That last item is what really separates the Q701 from other headphones. There are plenty of great, comfortable “flat” headphones out there (Sennheiser makes some phenomenal ones), but the Q701 has a unique sound you just don’t hear anywhere else. Some may find it overly analytical or robotic, but I feel just the opposite. When comparing it side-by-side with the Sennheiser HD600 and the Beyerdynamic DT880 — its most oft-compared brethren — the Q701’s soundstage just made my music feel “alive”. It made me want to bang my head and groove every time I put it on. And two years later, it still makes me feel that way.

Note: Since the AKG Q701 has an impedance of 62 ohms, it performs its best when paired with a headphone amplifier. I’m driving mine with an Audioengine D1, though there are cheaper options out there as well.

How I Made Up for the Q701s Shortcomings with DIY Mods

No set of headphones is perfect. I think this is partially what causes people to get on that “upgrade treadmill”, where it feels like you’re always looking for the next best thing. But there’s a lot you can do to improve a pair of headphones if you’re willing to get your hands dirty.

The Q701, in my eyes, had two flaws: The bass is a little anemic, and the headband is extremely uncomfortable. I solved both of these problems with DIY mods.

The bass was quite simple to fix, thanks to Head-Fi user mms6. His mod, detailed here, involves taking a few pieces of felt or microfiber and putting them behind the headphone’s cups. It’s super easy, takes just a few minutes, and is completely reversible, so it won’t void your warranty. Here are the basic steps:

1. Use two toothpicks or nails to remove the “Q” plate from the back of the Q701. Just stick them in the holes and gently twist counterclockwise as shown here. 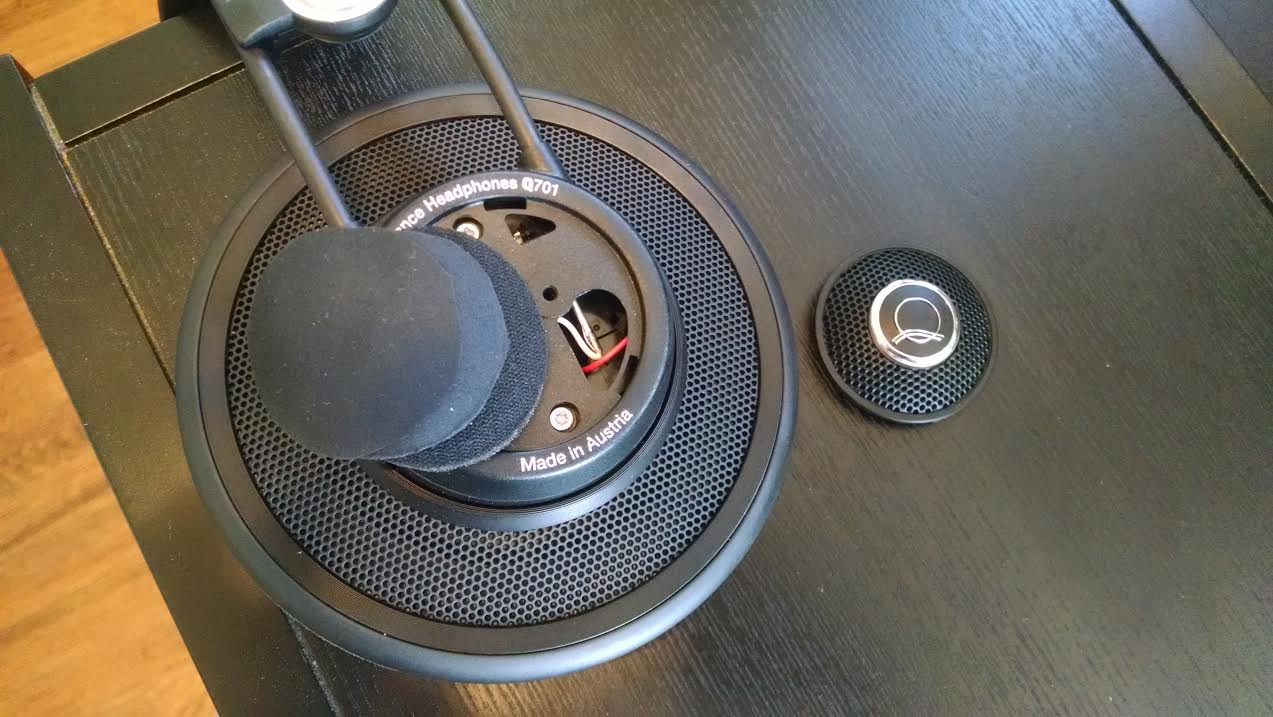 2. The Q701 already has a piece of felt there. Grab that and cut one or two circles the same size from a piece of microfiber. I used the black cloth that comes with Macs and iPhones. 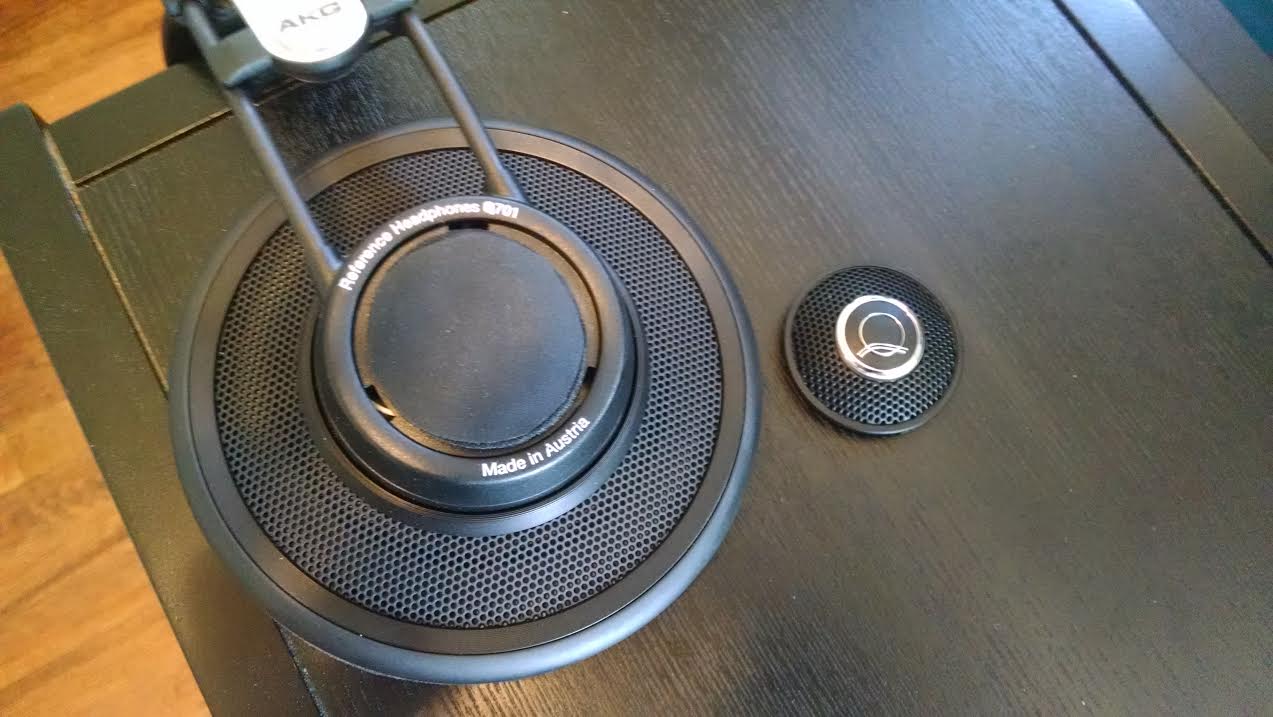 3. Place the one or two circles on top of the existing piece of felt and close the headphone back up. The more pieces you add, the more bass you’ll get, though it will decrease the soundstage just a tad. I’m not a serious basshead, but I needed just a tad more oomph to my music — so it was well worth the trade-off. 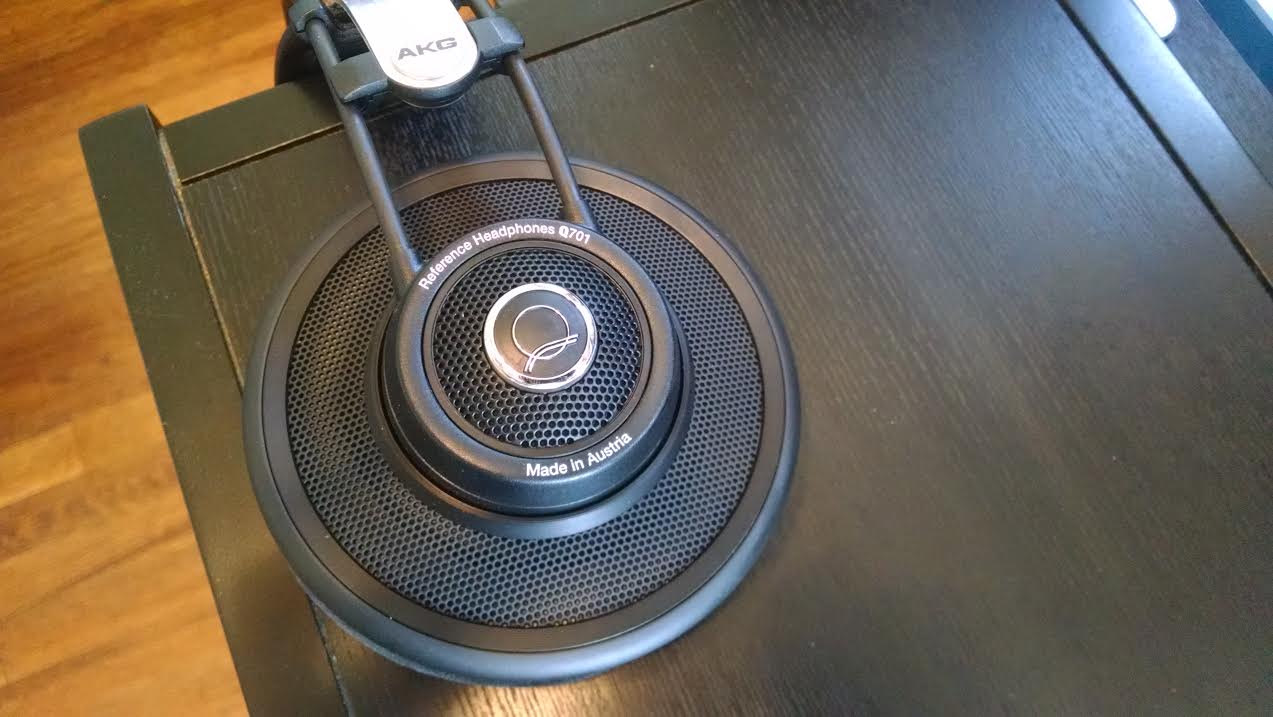 Fixing the Q701s headband was a bit more of a challenge. The stock headband has these horrible hard bumps along the top. I have no idea who thought these were a good idea, but they dig into your skull and make the headphones massively uncomfortable after an hour or so. So what’s a soft-headed nerd to do? Inspired by a few intrepid DIYers on Reddit, I replaced the entire headband with a piece of an old leather belt. 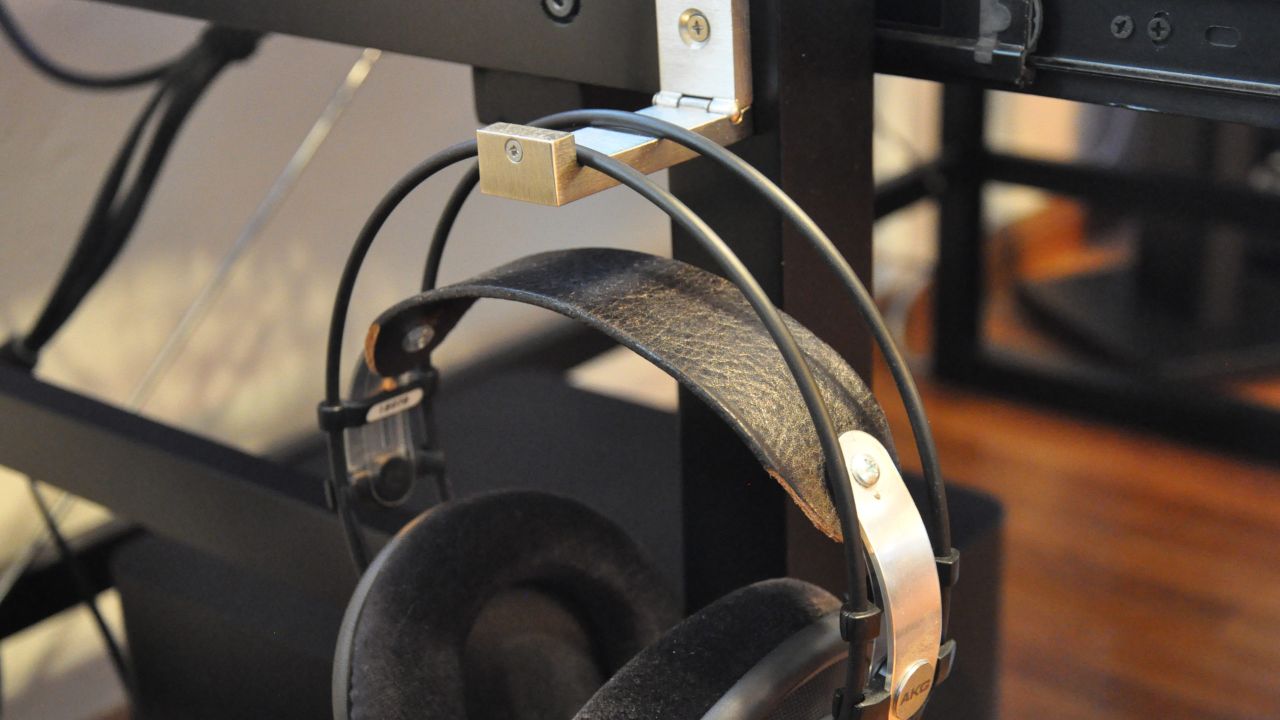 This was no easy task. I basically had to pop the “L” and “R” caps off the side of the headband, then drill out the rivets that held them in place (my drill was broken, so I poked at them with a screwdriver for about a half hour. I cut my finger in two places. I do not recommend this method.) After that, I cut my leather with some sharp scissors, poked a couple holes in it, and screwed the headband in place with a few nuts, as shown below. 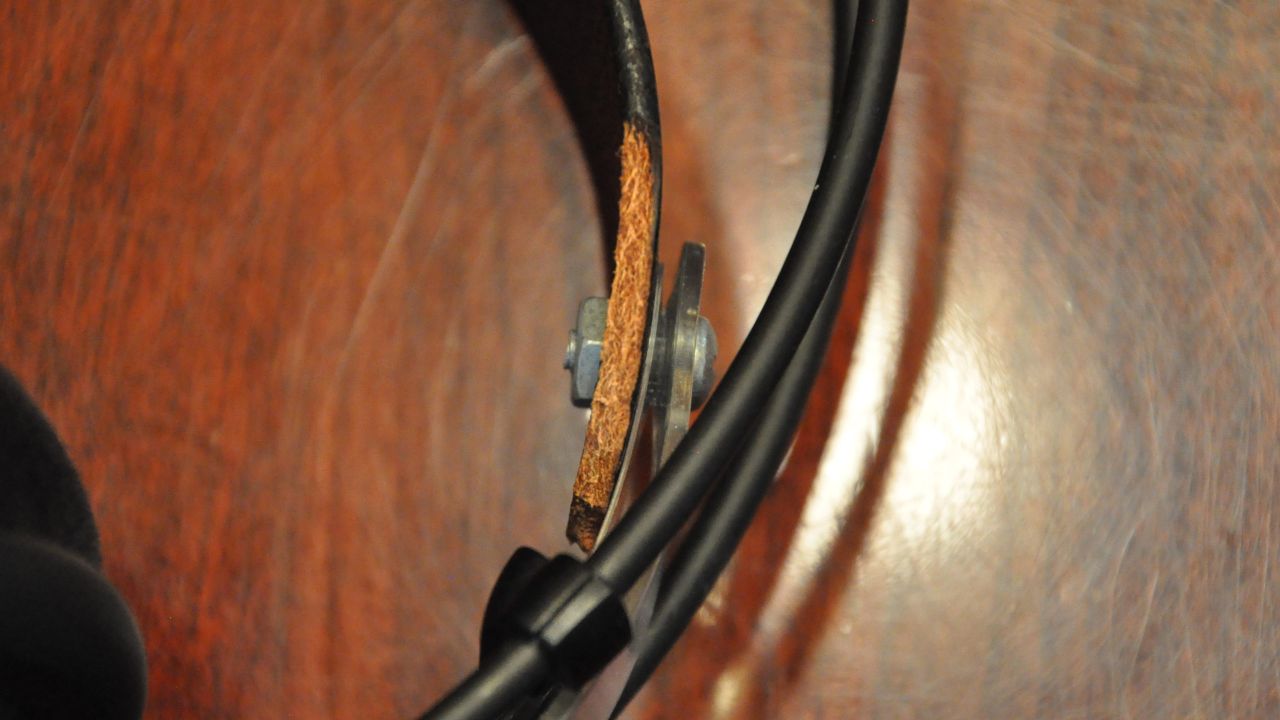 There are other ways to deal with the bumps, but this was my chosen method, and it worked fantastically well. And now my headphones are perfect for both my head and my ears.

Cheap (and Expensive) Alternatives to the Q701

The Q701 is the definition of bang for your buck. $350 may seem expensive, but in a field of products ranging from $10 to $1000, $350 is pretty great — and the Q701 easily competes with cans in the a slightly more expensive range. But if you have a vastly different budget, there are other similar headphones out there.

Most obvious would be the Q701’s cousins: AKG’s K612, K701, K702, K712, and K7XX from Massdrop. All the headphones in AKG’s “x7xx series” are very similar, but can differ slightly in comfort and sound. This Head-Fi post is a great primer on the differences between each. Finding the best model for you is all about personal preference, but I think the Q701s are king for their modability and great, sub-$300 price.

If you really want to go cheap, a brand called Superlux is famous for making low-end versions of popular brand-name headphones, including AKG’s K series. The Superlux HD 681 ($US30) and HD 668B ($US40) are both clones of AKG models, and the 681 is one of the best sub-$US50 headphones I’ve ever heard If you’re willing to spend a little more, AKG’s K240 ($200) is the headphone Superlux based the 681 off of, and occupies a nice price point in the middle.

If you don’t love AKG’s wide soundstage but want a good flat headphone in a similar price range, the Sennheiser HD600 ($370) and the Beyerdynamic DT880 ($500) are AKG’s most common competitors. The HD600 in particular is probably tied for my all-time favourite headphone, but costs significantly more. The Beyerdynamic DT880 sounds almost identical, in my opinion, to the HD600, for less money and a bit less comfort. You might also try the Sennheiser HD598 ($260), which is a step down in Sennheiser’s product line.

The moral of this post is not just “the Q701 rocks and you should buy it” (but it does, and you should at least try it). After all, headphones are extremely subjective. The other thing I really want to illustrate here — besides my inappropriately deep love for this specific pair of headphones — is that you can get off the upgrade treadmill. Not every headphone search ends after decades of flushing money down the toilet until you finally cave and buy the $US1700 LCD-X. All it takes is the following:

Of course, I can’t truly know what’ll happen in the future. Maybe 10 years from now my tastes will change. Or maybe my Q701 will finally break and I’ll find something better. But the more I try other headphones, the more I become enamoured with what I already have. And if they died on me today, I’d buy another pair in a heartbeat.