The U.S. Cities Where You'll Spend The Most Time Sitting In Traffic 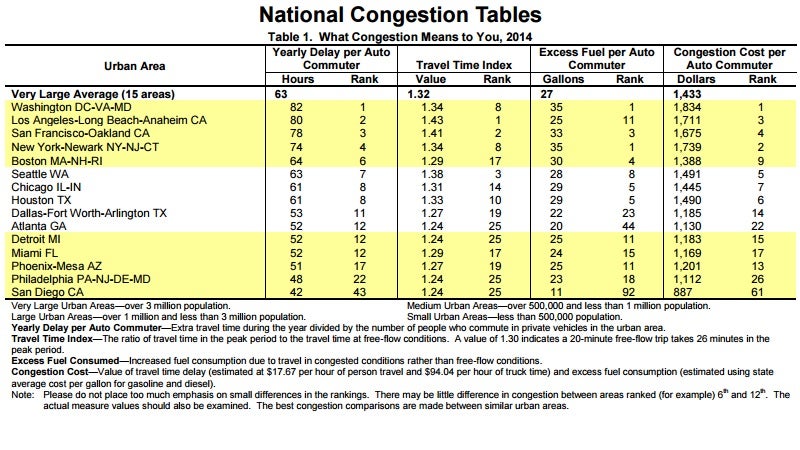 Work commutes can really suck, especially when it takes two hours to travel 16km. If you're planning a permanent move to the US, it pays to know which cities have the worst congestion. Some proactive analysts calculated the cities where you'll spend the most time just sitting in traffic: something all Aussie expatriates should consider.

The report, from the Texas A&M Transportation Institute and INRIX, took a look at traffic delays all over the United States to see where the most congestion is. Keep in mind, these numbers are not basic commuting time; they're additional time added to your commute due to traffic congestion. That means sitting behind the wheel while the car is not moving, or during stop-and-go type traffic. Here are the five worst areas:

You get used to sitting in traffic when you live in a big city, but when you look at the data it can be pretty eye-opening. The average Washington D.C. commuter is spending almost three and a half complete days sitting in traffic, not to mention the additional fuel consumption (which is 132 litres a year according to their data). If you live somewhere with a lot of traffic, make sure you're always taking the best routes. And if you plan to move to one of these areas, it might not be a bad idea to find a place that's close to where you'll be working. You can check out the complete report at the link below.