This week, Pizza Hut welcomed two new members to its super-deformed “Stuffed Crust” family: the spice-fueled Chillidog and cheese-laden Cheesydog. As their names imply, both products come with a giant hula hoop-shaped hot dog jammed inside the crust. The results are horribly fascinating and strangely intriguing. Read on for the full Allure Media verdict.

Once again, Pizza Hut has come up with a new way to make its boring crusts insanely indulgent. Just when we think the company has hit peak OTT levels it returns with something even crazier. We’re not sure if it’s benevolent genius or sick sadomasochism: maybe a bit of both.

Here are the blurbs for each pizza from Pizza Hut’s marketing boffins:

Both versions can be added to any pizza for the usual Stuffed Crust premium of $3. Bear in mind that you end up getting less toppings due to the thickness of the crust eating into the pizza’s footprint.

So what’s the kilojoule damage on these monstrosities? Adding the Cheesydog Stuffed Crust to Pizza Hut’s signature Loaded Pepperoni flavour brings the total to an astronomical 11300kJ; or 1413kJ per slice. The same pizza with a Chillidog Stuffed Crust tips the energy scales even further at 11600kJ (1450kJ per slice.)

These are pretty worrying totals; especially when you factor in the sodium which hovers around 4000mg. Clearly it’s intended for either an occasional treat or Leaving Las Vegas-style self destruction: there is no middle ground here.

To Pizza Hut’s credit, the company always shows “supreme” confidence in its products — without prompting, it delivered both Stuffed Crust pizzas to our office for the taste test treatment. There’s no such thing as bad publicity, as they say. Well, let’s see about that.

Below are the verdicts of me and my colleagues. For reference, the Cheesydog was attached to a Loaded Pepperoni pizza, while the Chillidog was Ultimate El Scorcho.

Chris Jager, Lifehacker Editor: “As regular Lifehacker readers can attest, I’m pretty adventurous when it comes to food, but even for me, the concept of a hot dog infused pizza seems a bit much. In short, it is fast food taken to the furthest of extremes.

“With that said, I was pleasantly surprised with how these ghastly abominations tasted. My favourite was definitely the Chillidog which contained a respectable spice kick for a mainstream fast food product. This was doubtlessly helped by the inclusion of a small mountain of jalapeno peppers. In any event, it brought a tear to my eye in the best of ways and I wouldn’t hesitate to order it again.

“Less impressive was the Cheesydog — the toppings were surprisingly sparse, especially given the smaller amount of real estate. On both pizzas, the hot dog was probably my least favourite part of the dish. While they tasted fine, the saltiness simply isn’t needed on a fast food pizza which are plenty salty to begin with. Not a bad effort, but I think I’ll be sticking to regular crust for the most part. I guess I’m just not extreme enough. 7/10”

Hayley Williams, Editorial Assistant: “As a self-confessed pizza snob who hasn’t eaten Pizza Hut since “popping up to the video store to rent a movie” was still a thing, I was decently surprised by this one. One of them, at least. The chillidog pizza had a good level of spice, and the sauce around the hot dog stopped the crust from being too dry. The cheesydog crust on the other hand was painfully bland. I don’t know if it actually changed the taste of the crust, or just the texture.” 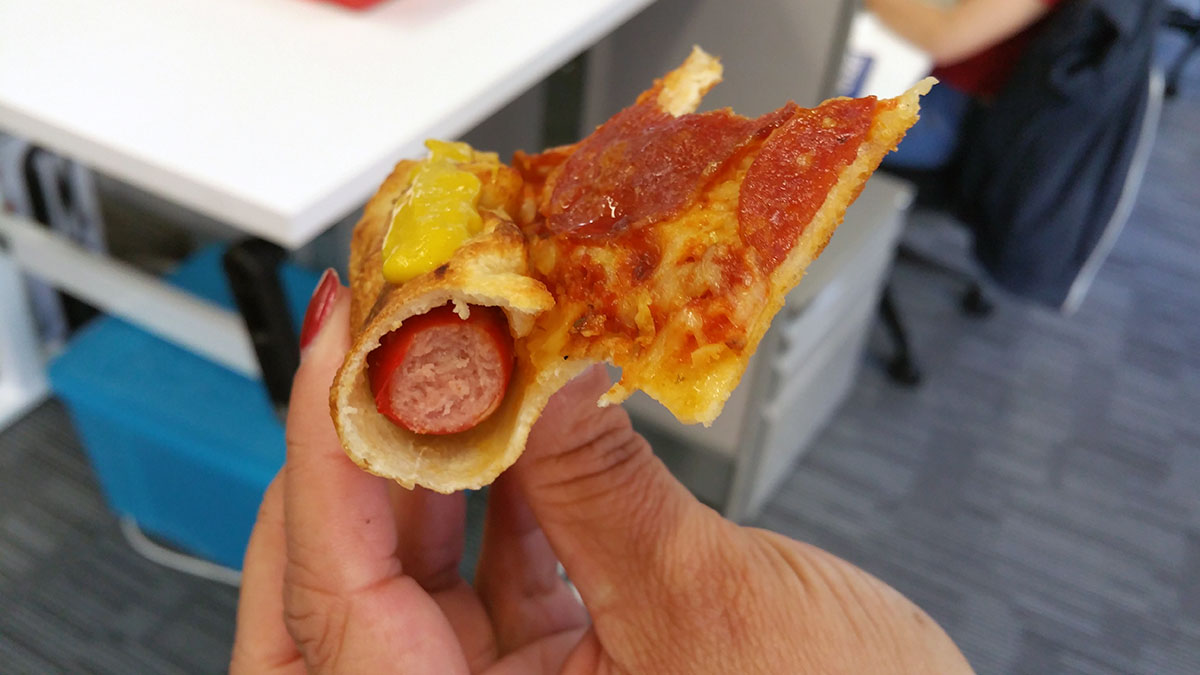 Anna Heck, Who What Where Social Media Editor: “I like that you can binge on both pizza and hot dogs at the same time and the guilt factor is considerably less compared to eating them separately. I think this pizza would be best consumed watching the footy at home with some beers: Food coma is inevitable. In conclusion, it was surprisingly delicious.”

David Scutt, Business Insider Journalist: “Stuffed crusts were one of the best innovations for pizza’s I’ve seen — until someone decided to put a hot dog inside instead of cheese. If you want hot dogs along with pizza, order cabanossi as a topping, or buy the dogs from the supermarket instead. You’ll save yourself money and end up with a better tasting pizza.”

Genevieve Rota, POPSUGAR News and Entertainment Editor: “I was totally dubious but everyone looked like they were loving it, so I caved. The sausage-in-the-pizza thing is kinda weird but also not. It’s like having a bite of pizza and then a bite of hotdog, and neither of those things are bad. I wouldn’t exactly seek this out but I would totally have a piece if someone else bought it.”

Mia Steiber, Editorial Assistant: “I liked the pizza portion because, real talk, everyone likes pizza except weirdos. So that’s a given. But the hotdog in the crust was far from ideal. I guess sausage as a topping is a pretty normal thing but having sausage in the crust is a bit odd and I decided not to finish it because it was rather unpleasant.

“I would also like to take this opportunity to revist the awesomeness that was the Hershey’s chocolate chip cookie pizza. Man, that was so so awesome. I would eat that every day if I could. It’s not available anymore but I’m thinking of launching a Kickstarter campaign to bring it back.”

Bianca Heuvel, Finance and Office Manager: “The Chilli Pizza was really good. Great amount of sauce and the flavours were fantastic. The crust and sausage was filled with sauce and very tasty. While there was no need to add any additional sauce, the addition of mustard enhanced the flavour.

“After having the chilli pizza, the cheese version was a bit of a letdown. The crust was dry with a piece of sausage stuck in the middle of dry pasty. Adding sauce did not do much to enhance the flavour as it tasted quite bland to begin with.” 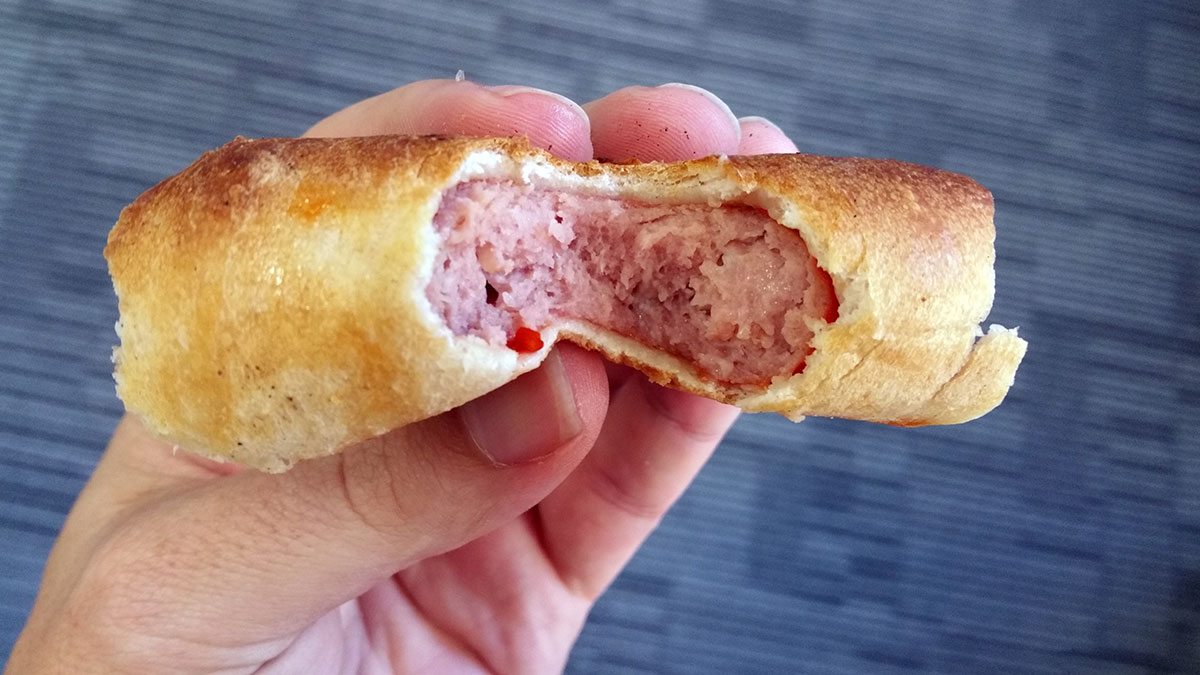 Caligula, Roman Emperor: “Whoa. Maybe this is going too far.”

As you can see, opinion was pretty mixed. Now it’s your turn. Have you ordered Pizza Hut’s Chillidog or Cheesydog Stuffed Crust Pizzas yet? What toppings did you go with? Did they go well with the ‘dog? Share your opinions in the comments section below!