Since the iPad’s launch in 2010, people have debated whether it’s an amazing productivity tool, or a toy for games and movies. With iOS 9 though, the iPad’s usefulness is a bit clearer. Apple brought some much needed productivity features to the device (not to mention a whole new iPad made specifically for work), so I spent a week working from mine to see if it’s actually a pleasant experience or not.

With iOS 9 (coming September 16th and available in public beta right now), you get a new multitasking system, better keyboard shortcuts, easier text selection, and a picture in picture mode for watching videos while you work in other apps. None of this stuff is revolutionary, but they are features people have asked for on the iPad for years. And they do make the iPad a bit better as a laptop replacement…for some people.

Apple’s new multitasking is pretty useful on normal people-sized iPads, and I assume it will be even better on the Pro. Multitasking comes in three flavours on iOS: Slide Over, Split View, and Picture in Picture.

Slide Over allows you swipe your finger from the right side of the screen to pull up a second app in a small overlay, much like Control Center. Here, you can quickly jot down a note or look something up while keeping another app in full-screen. It’s handy for notes, mostly, but I also used it to look something up in Safari while I was typing elsewhere.

Split View is more of a traditional multitasking feature. With it, you can have two apps open at once, side-by-side. I found this most useful when researching stuff and to grab pull quotes (you can use and edit both apps at once, so copy/pasting from one side to another is as easy as you’d think). It was also handy when comparing notes or browsing online. I imagine artists working off various source images will also find this handy. I mean, it’s nothing earth-shattering (and it’s available on other tablets); it’s the same as having two apps open on your desktop, but it’s useful nonetheless.

Picture in Picture shrinks down a video and plays it in the bottom of the screen. Unless you’re watching lectures or something, it’s pretty hard to think of how this would be useable while working. I didn’t bother with it, but I also don’t ever watch videos on my iPad.

Here’s the rub, though: Split View only works on the iPad Air 2 and iPad Pro. Slide Over and Picture in Picture only work on the Air, Air 2, Mini 3, and Mini 4. Older users are out of luck with most of these features. In fact, I had to borrow a friend’s iPad for this experiment because mine didn’t support any of the new features, and these certainly aren’t revolutionary enough to justify a new purchase.

With keyboard shortcuts, you don’t have to touch the screen 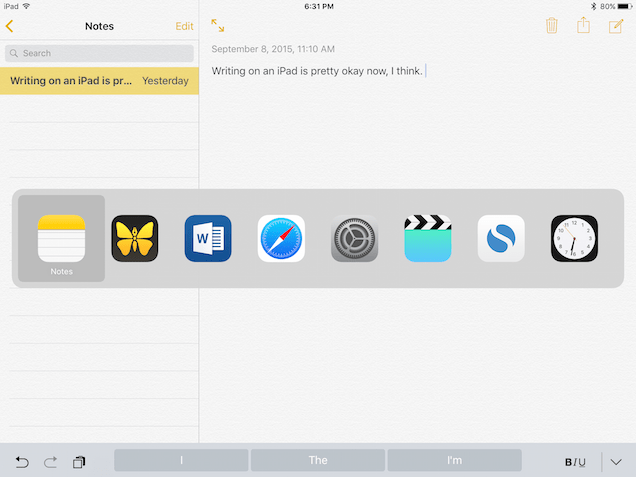 Multitasking is nice if you have a newer iPad, but if you don’t, all you’re getting out of this update is some keyboard shortcuts. Good thing that some of them are actually pretty nice.

More helpful is the new app switcher shortcut: Command+Tab (yes, that’s the same shortcut for Windows and OS X). When you tap Command+Tab, you get an overlay of the last opened apps and you can use the arrow keys to pick an app to switch to just like you can in OS X. You never have to touch the screen, which makes using a hardware keyboard way more useful.

The new on-screen keyboard shortcuts are less useful. The big new addition to the keyboard is the new Shortcut Bar located directly above the keyboard. Here, you’ll find buttons to quickly copy/paste, bold, italicize, and underline, or add an attachment. It seems handy to have these around, but I rarely used anything in the Shortcut Bar because it was never any easier to use than just tapping a word to get the same menu.

iOS 9 also adds new “easy text selection” for selecting text and moving the cursor around. Just tap and hold two fingers on the iPad’s keyboard, and you can move a text cursor around to any part of the text. Once you have it where you want it, you can double-tap to select the current word or triple-tap to select the entire paragraph. It’s nice, but not that much better than the old text selection.

All told, the on-screen keyboard improvements feel pretty useless, but the addition of keyboard shortcuts and app switching to hardware keyboards make it feel a heck of a lot more viable as a replacement to a laptop. For the first time, I actually enjoy using the iPad to write and work off of. Before, I’d deal with it when I had to, but having to touch the screen always felt awkward. Now, I don’t have to.

Who really benefits from iOS 9?

After trying it out, I feel like students are going to get the most out of this update. The iPad’s always been a decent tool for taking notes in class because it’s so small and light, but now it’s really useful. With multitasking, you can now keep a book open in the Kindle app alongside the notes you’re taking in class. Or you can keep a lecture video open in a small window while you’re working on other tasks. Even the simple task of typing a research paper is far more doable when you can actually have your paper and notes side-by-side on the screen. That said, when it came to writing about Apple’s big event yesterday, I returned to my desktop computer. You can certainly work with the iPad in that capacity, but it’s not always pleasant.

For the rest of us, the benefits are less obvious. Writers of all types will certainly appreciate the new keyboard shortcuts alongside the new multitasking options, but time will tell if general users will care. The iPad’s always been good as a distraction-free writer, but now it’s a bit more powerful, too. So if your job includes a lot of writing, note-taking, or other basic typing skills, iOS 9 makes it a lot better. If you never figured out what you’d even want an iPad for, though, nothing’s changed.