Picking a universal remote control is pretty tricky these days. There are plenty of simple, programmable IR blasters out there, but some of the best remotes can control other devices using Bluetooth or even Wi-FI. Read on for our five favourites.

Universal remotes tend to stand on one side of a huge dividing line: on the one side, there are programmable IR remotes that are cheap and effective for most home entertainment setups. On the other are complex and often more expensive devices that can control all of your IR devices, but also any smart home gear you have and other technologies around the house. Here are our top five picks: 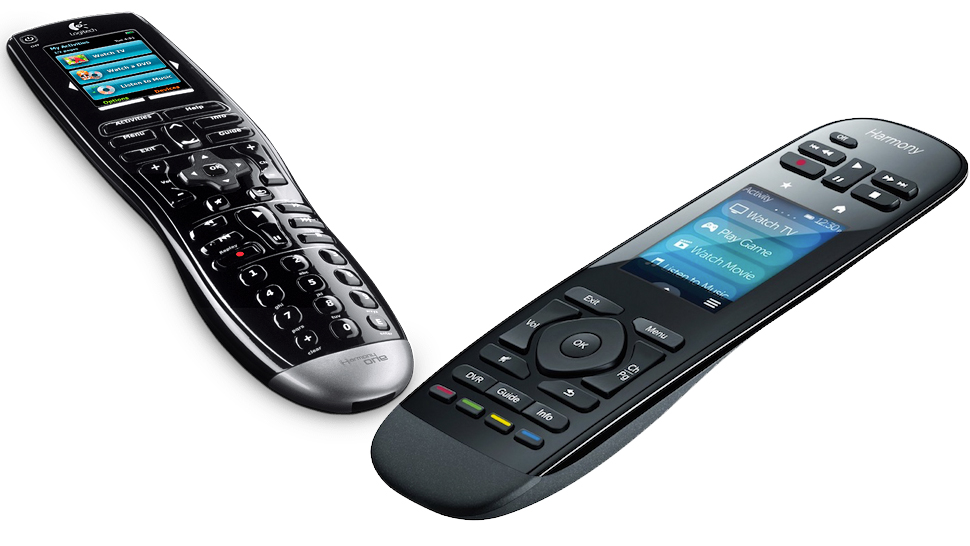 The Logitech Harmony Ultimate One is a tough universal remote to top. Even though it’s discontinued, you can still pick one up for around $150 from Computer Alliance. It’s an IR blaster only, meaning RF devices and Bluetooth devices are out, but also trims down the number of buttons on the face of the remote, instead relying a bit more on the touchscreen for a lot of operations and for custom, user-added buttons. It will be able to control virtually everything in your setups, with little real configuration. On the downside, the desktop programming software is quite complicated, but it’s better than pointing the remote at another remote to learn commands. 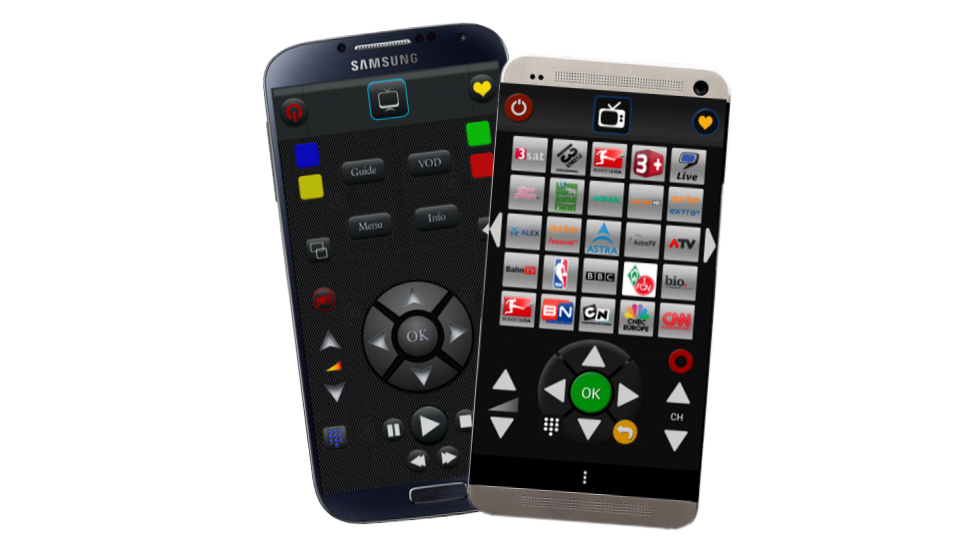 Touchsquid isn’t so much a remote control as it’s a remote control app that turns your Android smartphone or tablet into a universal remote thanks to its pre-programmed database of over 700,000 devices. Of course, your device needs to either have an IR blaster of its own for the app to work (and there’s a list of supported phones and tablets here) or it has to be paired up with an external IR blaster that will send the app’s signals to your home entertainment gear.

If you’re looking for a quick way to turn your Android phone — especially if you have a device like an HTC One or a Galaxy S5, both of which have IR built-in — into a universal remote, this is it. Touchsquid’s software comes in two different flavours, the $14.31 Home version that lets you control up to 6 devices per “room profile,” and the $38.22 Pro version, which bumps the device limit up to 14 per “room profile,” adds user-programmable macro buttons, nested buttons and cross-device syncing to the pot. Best of all, if you’re not sure it will work for you, you can download a free trial from Google Play. In every case though, you just tell Touchsquid what devices you have in your home theatre, which ones you use for what, program your activities (much in a similar fashion to Harmony devices), and you’re off and away. 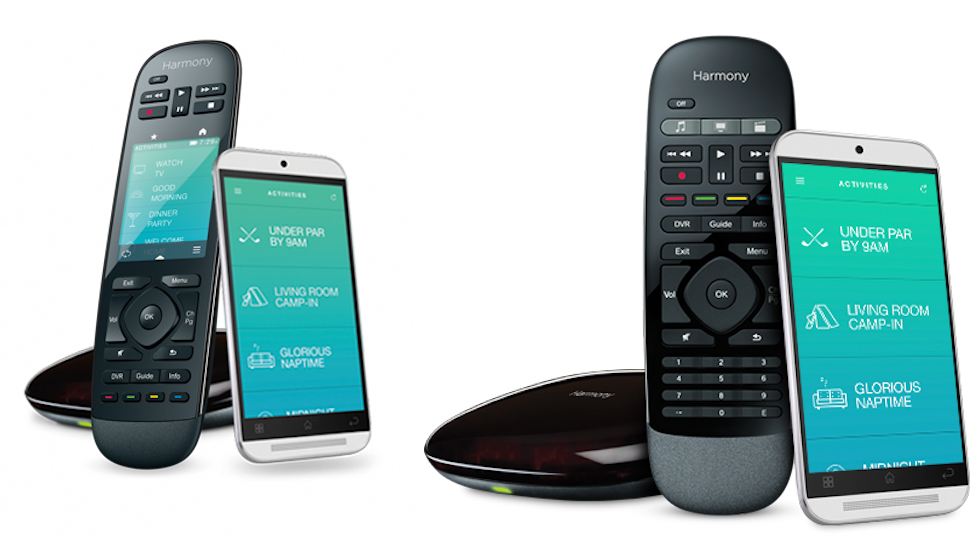 Logitech’s Harmony Home and Harmony Smart Control are certainly different, but we’re putting them together in this category because of the one critical feature they have in common: The Home Hub. This platform lets you use your smartphone or tablet as a remote control for not just your home entertainment units, but other smart home or connected devices around your house. That means lighting systems, security systems and more. It’s all programmable and customisable, and you can manage it all from your phone, tablet, or both. Of course, whether you’re geared more towards controlling entertainment devices or smart home devices will determine whether you want the Harmony Ultimate Home ($450) or the Harmony Smart Control ($169.)

The Ultimate Home is designed to control everything in your home — not just your multimedia gear, but anything that can be controlled over Bluetooth, Wi-Fi, RF, or IR. The Harmony Smart Control on the other hand is designed more for closed-cabinet control of all of your entertainment electronics, still works with your smartphone or tablet, and is designed firmly for living room use. It can even be expanded by purchasing extra controls for other rooms, all connected to the same Home Hub.

It’s a little confusing (okay, very confusing) but once you spend time comparing the devices at Logitech’s site, you’ll be able to choose which option has the features you’ll need. The big thing here is that all of these revolve around the Home Hub to control multiple devices with your smartphone or tablet OR an included Harmony remote, all capable of managing all sorts of devices in your home, whether they’re traditionally receptive to a remote control or not. 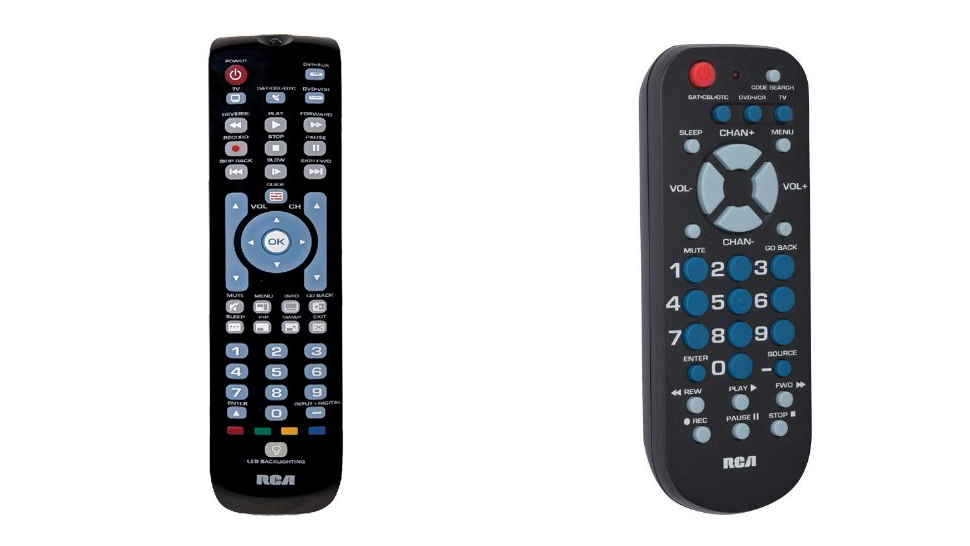 We have to give some love to the simple RCA Universal Remote, which has come in several shapes and sizes over the years. The RCA RCR313BR is a three-device model that will set your back around $37 at Zoxoro. It harkens back to a simpler day of universal remote programming which makes it ideal for people with basic needs.

You’ll need to give it control codes if it doesn’t automatically know the type of device you’re trying to manage — and even then, getting it to work may be hit or miss. That said, if your devices all use common codes, it’s a simple device that can replace your other remote controls for a reasonable asking price. 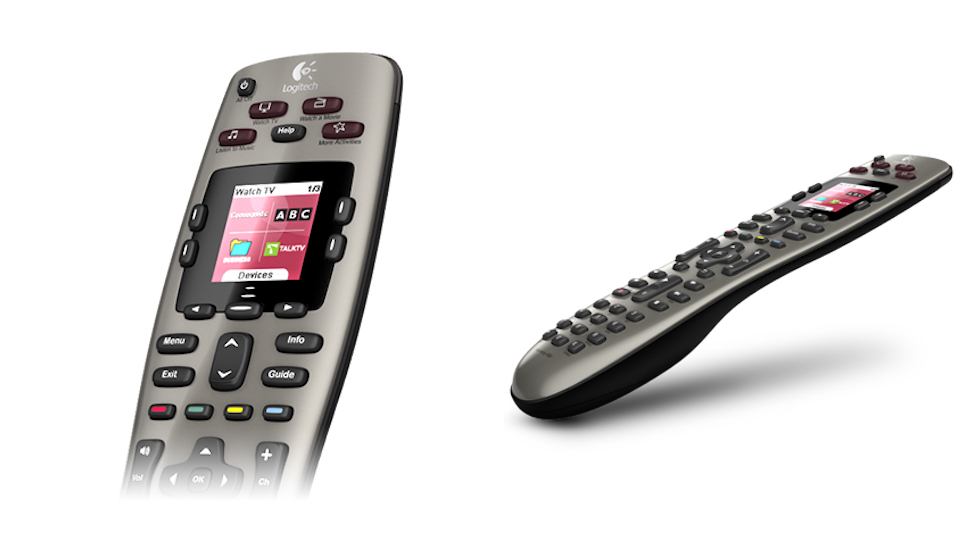 Like the RCA RCR313BR, Logitech’s Harmony 650 represents a somewhat simpler time in universal remote setup and use. These remote is a bit more durable, has more controls and buttons and a smaller touchscreen, and while it supports fewer devices, it’s not incredibly expensive. It will cost you is $89.95 direct from Logitech and can control eight devices. It has a colour screen for programmable activities or favourite channels, one-touch activity buttons and walks the line between just the options you need and a wallet-friendly price.

This week’s honorable mention goes out to the Sony PS3 Media Remote Control, which will set you back around $40. It’s easily programmed, has all the buttons and commands you need, and works pretty well without needing other remotes to step in all the time. Obviously it’s less suited to people who don’t own a PlayStation 3 but is well worth considering for people who have one.