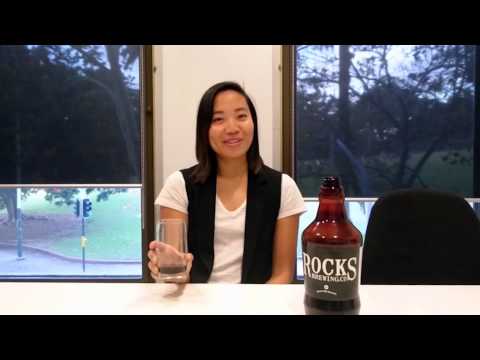 Chocolate and beer are both pretty amazing — so why not combine them into a single kickarse beverage? This is the slightly dubious reasoning behind Chocolate Milk Stout; a new craft beer from the Rocks Brewing Company. We recently got our hands on a “growler” of this stuff to find out how it tasted. Watch the video for the Allure Media verdict.

Chocolate Milk Stout is brewed almost entirely from rye and oats, which purportedly lends the beer a smooth and velvety texture. Cacao and lactose are also added during the brewing process to give the finished product a hit of chocolatey flavour. If the brewery is to be believed, the final result is like drinking a complex stout accompanied by dark Belgian chocolate.

It packs in a heady 6% alcohol volume and can be purchased on tap from the Brewery Bar in Alexandria, Harts Pub on the Rocks and the Lord Raglan Hotel in Redfern, all in NSW. You can also pick it up in 1.89L growlers, 500ml bottles or by the keg. Here’s a list of full ingredients:

Flavour: initial sweetness with a silky smooth mouthfeel giving way to a burst of rich chocolate with a dry finish.

So how did it taste? I was expecting a thick ‘n’ chewy Guinness-style stout which wasn’t too far off the mark. If you prefer a lighter beer, the addition of cocoa notes probably won’t be enough to sway you. But for anyone who enjoys a formidable stout, this ain’t too bad. Here’s what the rest of the team thought:

Taste Test is a regular Lifehacker feature where we give you the skinny on new and unusual food products. What would you like to see us test next? Let us know in the comments!