How To Make Sweet Potato Chips At Home

Sweet potato crisps are one of the tastiest savoury snacks known to mankind. They’re also prohibitively expensive, with a single 50g packet costing upwards of $6. Thankfully, it’s not too difficult to make your own at home. Here’s how it’s done.

As a self-confessed sweet potato fiend, I have been obsessed with this root vegetable since childhood. There are a vast variety of sweet potatoes, all with their unique characteristics, but one thing they have in common is that they’re incredibly delicious. You can steam them, boil them, fry them – but arguably the best way to eat them is in crisp form. Because who doesn’t love crisps? (NB: We use the term “crisps” instead of “chips” here on Lifehacker: link here.)

Let me put it in perspective for you — a kilogram of sweet potatoes are currently selling for $3 at my local green grocer. Determined, I went searching for a quick and easy way to sate my burning desire for sweet potatoes that will appease my inner miser as well.

Baking is okay, but…

Like most people, I don’t own a fryer and the thought of wasting a litre of oil just to satisfy my petulant want for sweet potato crisps seemed a bit crazy, so the first option that I tried was to bake sweet potato fries.

But after many trials on my home oven, I have concluded that the effort is definitely not worth the result. Not only does it takes forever to cook them (upwards of 40 minutes at around 200C) it’s also a real hassle to have to flip them over halfway and you have to watch the oven as some crisps cook faster than others.

They also don’t come out crispy enough unless they’re bordering on charred, so needless to say baking is not my weapon of choice for making sweet potato crisps.

You can try frying, but…

Deflated by my many failed attempts at baked sweet potato crisps, I conceded to the frying method and emptied a bottle of canola oil in a wok and began to fry. Much to my continued disappointment, the crisps ended up more on the soggy side.

I’ve heard you can soak the sweet potato pieces for a time before frying or double fry them to increase the crispiness level, but ain’t nobody got time for that.

The breakthrough: nuke the suckers!

I recently stumbled upon a website which talked about making sweet potato crisps using the humble microwave in under 5 minutes. I was floored. Why hadn’t I thought of this method before?!

I had previously had success steaming sweet potatoes whole in the microwave (wrapped in a wet paper towel) but I had not made the leap to replicating that success with crisps. Would I be met with yet another bitter disappointment?

I decided to try anyway… for science.

Step 1: Start off with a standard orange sweet potato, which you can get at most supermarkets and greengrocers. If you care about supposed pesticides on non-organically grown sweet potatoes, feel free to peel the skin off. If you’re like me and believe stomach acid kills most things, leave the skin on — it also saves time and it’s more delicious this way.

Cut the sweet potato into thin slices. The thinner it is the quicker it will crisp up in the microwave. You can use a mandolin slicer if you have one, but a sharp knife and a steady hand will be just fine.

Step 2: Get some baking paper, lay it on the microwave tray, and start placing pieces of the cut sweet potato on there. Keep in mind that crowding the tray will mean a longer cooking time, which doesn’t actually bother me. As you can see here, I packed it all in fairly tight. 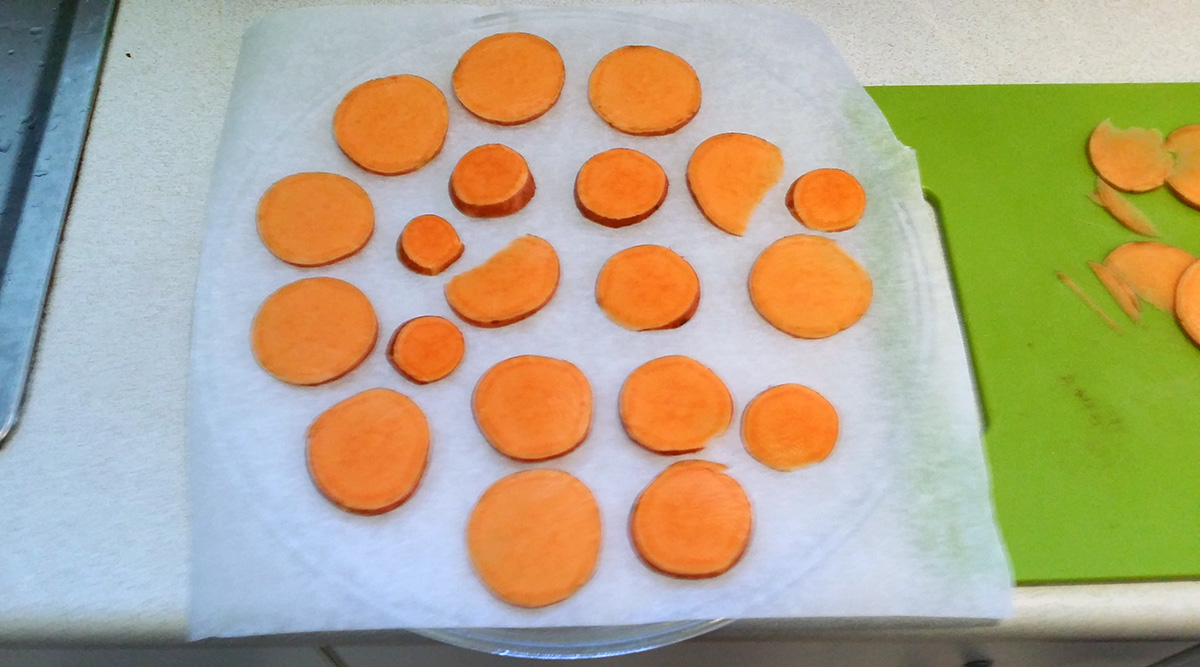 Step 3: If you have cooking oil spray (I used EVOO spray), spritz the pieces of sweet potato crisps with it. But if you don’t have spray, just use a pastry brush, dab it in some oil, and brush it lightly over the pieces. I suspect if you’re desperate enough, you can just dip a piece of paper towel in some oil and just dab it on. 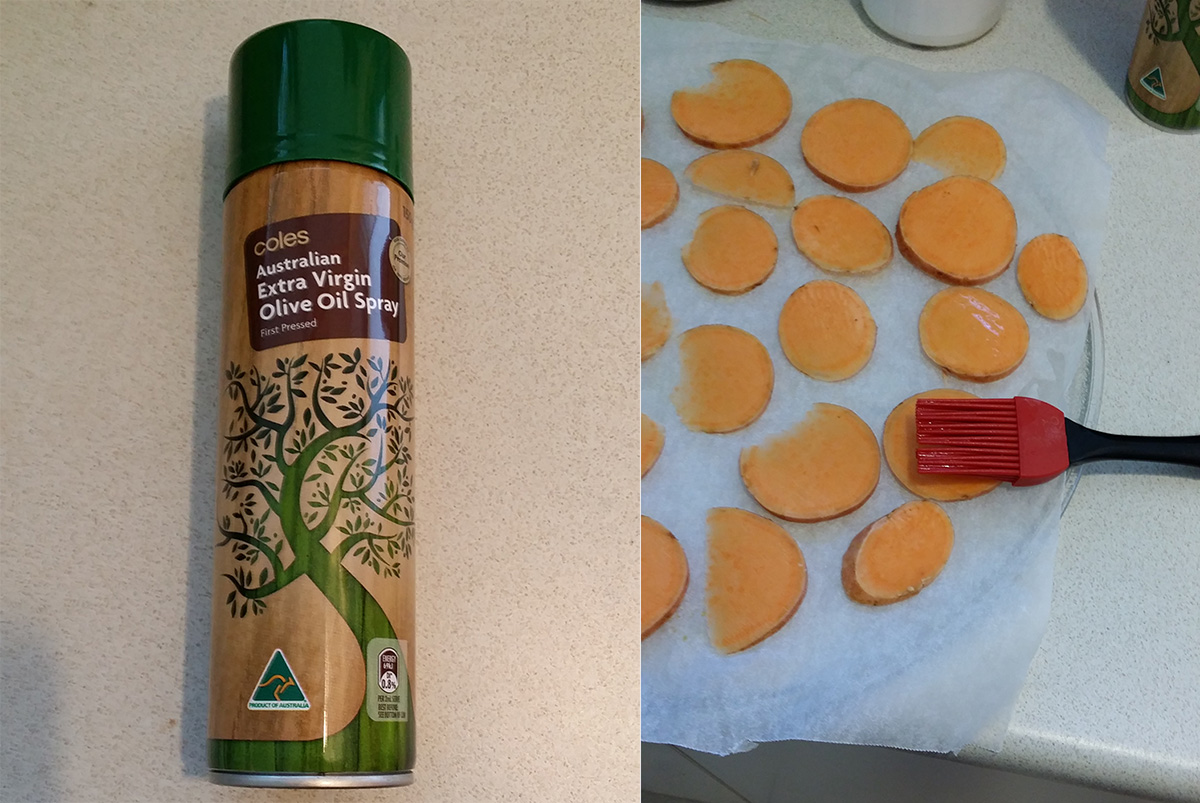 I’m all about options!

Step 4: Add salt if you want before whacking it in the microwave for around four minutes to begin with.

Now, depending on your microwave, it may take more or less time to cook the sweet potato crisps. In my modestly priced microwave it took a total of eight minutes, but I liked to stop it at four minutes to sprinkle on some paprika before nuking it again for another four minutes. This reduces the chance of the paprika from burning.

Bear in mind if you’re doing this for the first time, you should keep an eye on the sweet potato crisps if you need to microwave it for longer than four minutes. I recommend doing it a minute at a time while watching it so you can stop the microwave when you see or smell burning. 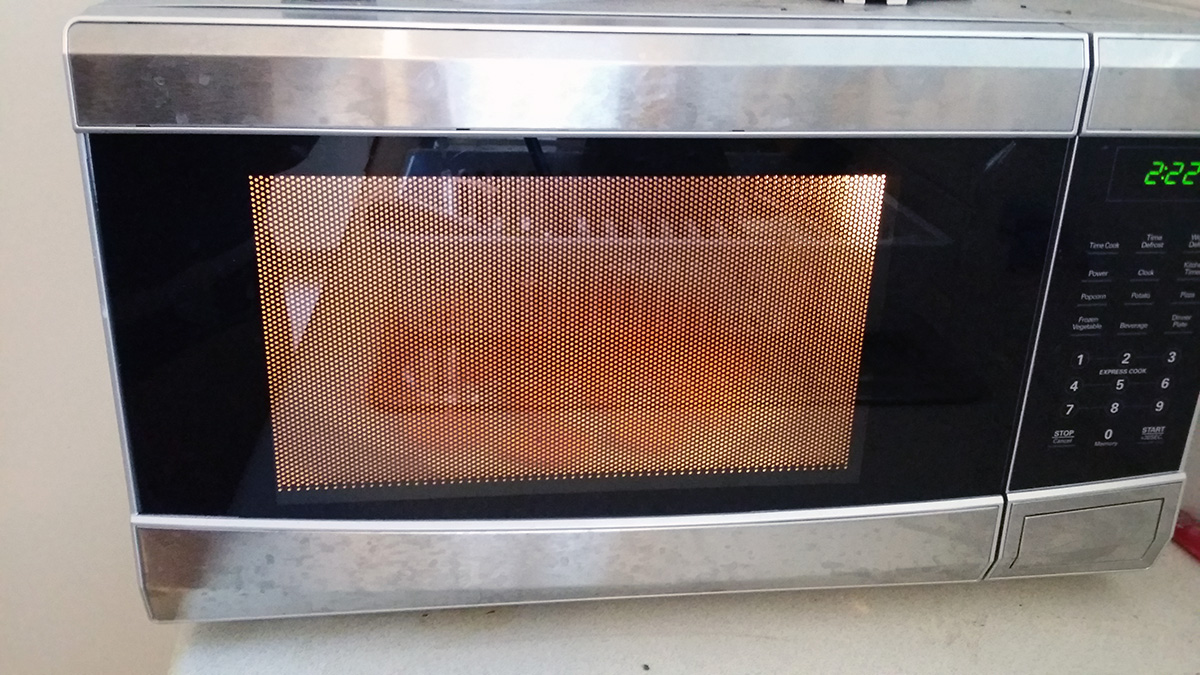 Opening the microwave in between each microwave sessions also helps let the steam out, which helps with the crispiness. Bear in mind that the the crisps will become even crunchier as they cool so if they are still a little soggy as soon as you open the microwave then give it about 30 seconds to see if they harden up enough.

Cooking time will depend on a number of factors: your microwave, water density of the sweet potatoes you’re using, etc. 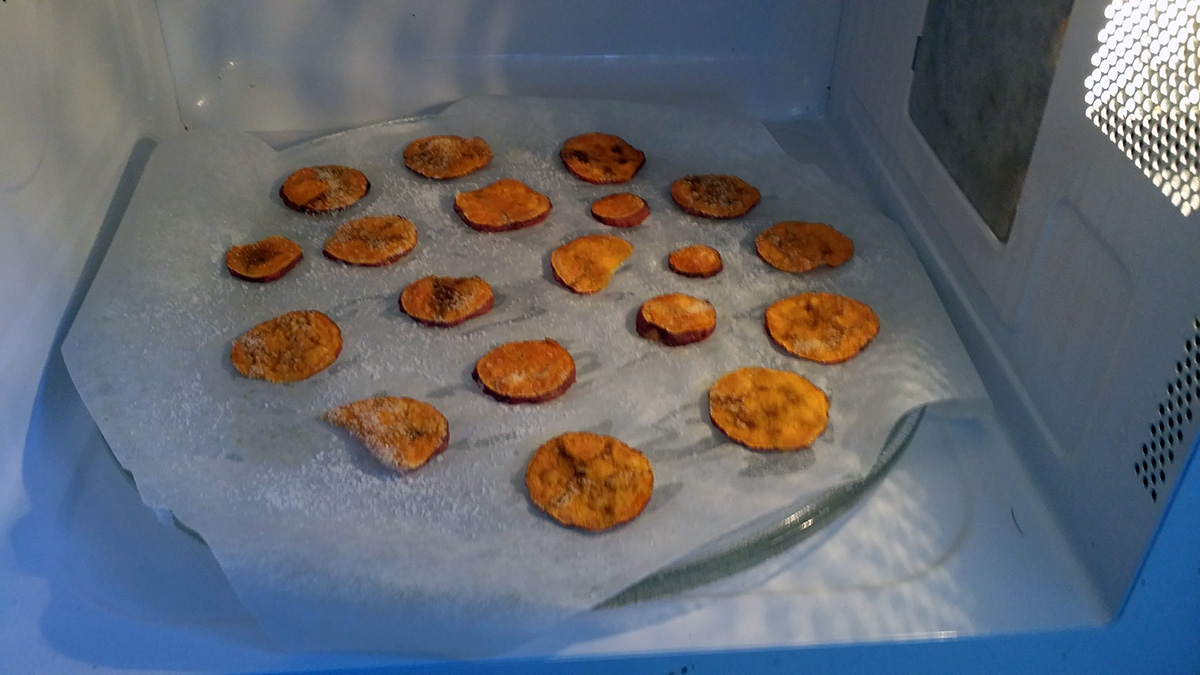 The good news is, this microwave cooking method seems to work on other variety of sweet potatoes as well. I tried this on a korean purple sweet potato (purple skin but is white inside) and it worked a treat.

I’ve also tried using a ceramic plate instead of baking paper (because, you know, baking paper ain’t cheap… spoken like a true cheapskate) but I would recommend spraying the plate with oil first before laying the sweet potato pieces on there to prevent it from sticking. 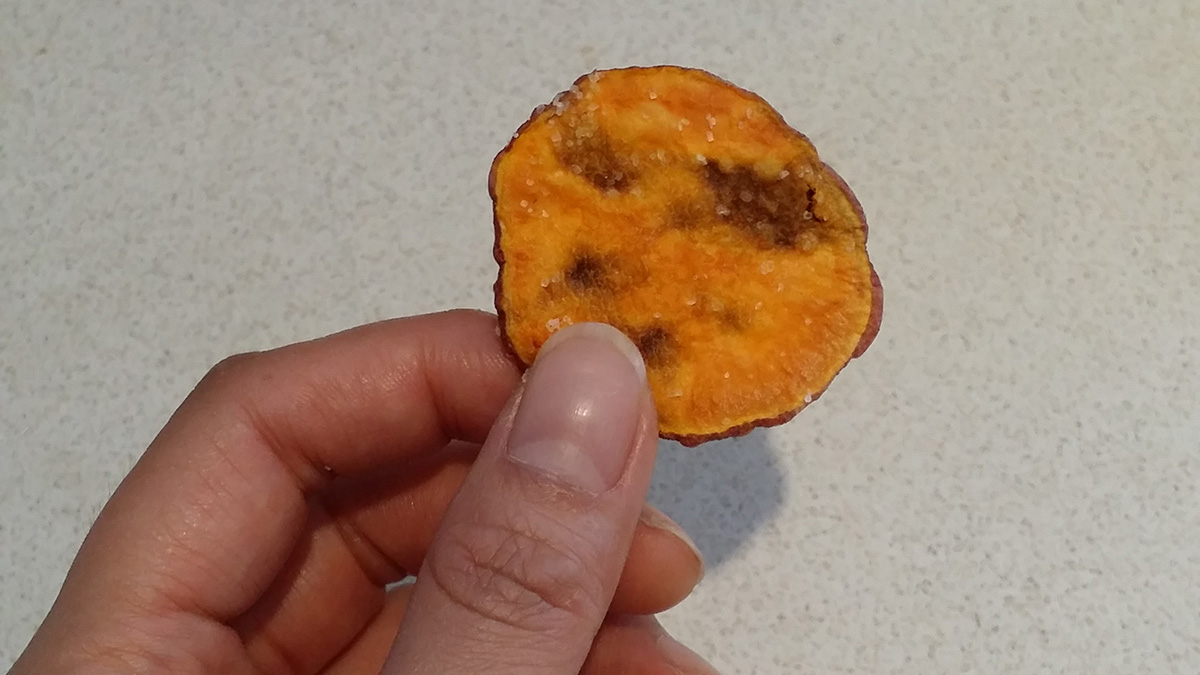 I was going to experiment more with trying to preserve the crispiness of these sweet potatoes until the next day but who am I kidding? These sweet potato crisps are so delicious it will be hard to stop yourself from eating it straight out of the microwave.