Everyone struggles with procrastination now and then, sometimes because the stress about starting a task keeps us from acting. David Cain points out at Raptitude, however, that the moment you start acting is the beginning of the end of that anxiety.

The chart above is basically an explanation of the lifecycle for any task or thing you have to do. Anxiety increases from the moment you have something on your to-do list and peaks until you actually start doing it.

As you can see, the problem starts when you know what you need to do, but balk on doing it. It grows in that space between the knowing and the doing. The anxiety, shame, and fear associated with the task rise as long as you live in that space.

Nothing else happens in this phase, except for your own suffering and ageing. We can call it the Unproductive Phase. The longer this phase goes on, the more anxiety it generates and the harder the task itself appears to be.

At some point, often spurred by a crisis of some kind, you start to actually do the thing you’re supposed to do. It is here where the anxiety usually spikes — you are entering the Productive Phase, where failure, embarrassment, and the discovery of your own incompetence go from being future-dwelling spectres to real-time dangers. That’s why procrastinators avoid ever getting to this part.

That stressful period when starting on a task, however, doesn’t last long. You realise that whatever the task was you were putting off is just one finite, doable thing.

For serious procrastinators, a longer unproductive phase just increases the anxiety and leads to a paralysing crisis point. 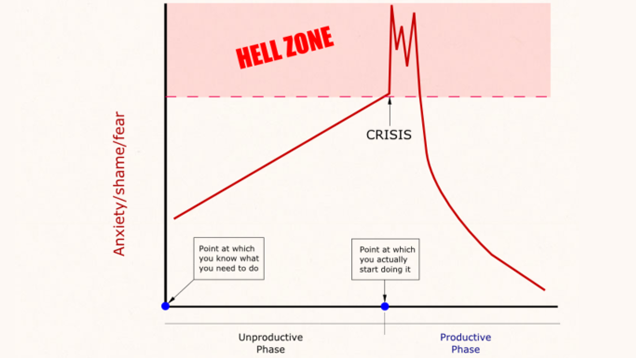 In other words, just do it. The only way to beat the anxiety or fear is to get started.

Check out the post on Raptitude below. It might sound simple, but the insights could help you stop procrastinating once and for all.

How to Get Yourself to Do Things [Raptitude via Tech.co]