How Cisco’s Intercloud Links All The Clouds

The only thing we can be certain of is networks will only become more complex. One of the big challenges is more and more data is being created, stored, analysed and used on the edges of the network. And tat means lots of separate systems. Cisco expects the Intercloud to do for the cloud what the Internet did for networks.

Lifehacker’s Cisco Live 2015 news is presented by our ongoing IT Pro coverage, offering practical advice for deploying tech in the workplace.

Back when I started working in IT and we configured a workstation, we chose between multiple network protocols, often needing to make different protocols work together. NetBEUI, IPX/SPX, Apple Talk, Token Ring and TCP/IP (using Trumpet Winsock) were all part of the networking puzzle. Over time, most of those protocols faded away and we were left with one main protocol, TCP/IP.

Today, we’re faced with a bunch of different cloud solutions like Azure, AWS, Google and IBM. 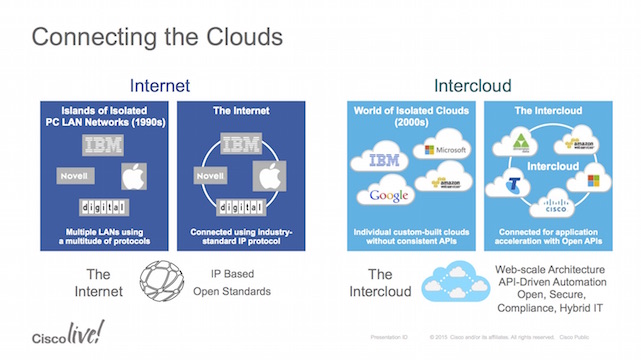 One of the things Cisco wants to do with the Intercloud is make it possible for companies to seamlessly move workloads between different cloud providers. For example, you may have a server workload operating within Azure. Cisco wants to create an environment where you could shift that workload easily from there to AWS even if that means switching hypervisors.

The Intercloud is made up of three distinct components. There are all of the services you can potentially access from cloud providers today. That’s all the “as a Service” stuff you’re probably consuming today. Things like infrastructure, disaster recovery, unified communications and desktops.

In the centre is a marketplace where you can access tools. Unsurprisingly, Cisco is pitching their DevNet services as the place to create these tools. These are the tools and applications that glue the different “as a Service” offerings in the market. One of the announcements made during Cisco Live 2015 was the appointment of the first wave of independent software vendors in this space.

Cisco is then adding its own services to this. Tools such as Spark (which the media contingent at Cisco Live 2015 have been using to access presentation materials, ask questions and share information between themselves and with Cisco), energy management and others are added to the mix.

Apprenda’s software lets you set rules for applications deployment. Once the application was selected using a regular file picker, there was a checkbox for tagging whether the application handled personally identifiable information, or PII. If “yes” is selected, the application will be automatically deployed to servers designated as conforming to the appropriate PII rules.

There are some significant opportunities wrapped up in Cisco’s Intercloud. Faster deployment, and flexible management will be of benefit to system admins and developers. But I suspect it’s going to take some time before the dust settles with could providers and the market chooses the best way for different enterprise cloud solutions to interoperate.

Disclosure: Anthony Caruana travelled to San Diego as a guest of Cisco.