Ask LH: What’s The Best Way To Wash My Fruit And Vegetables Before Eating?

Dear Lifehacker, Pesticides and disease-causing bacteria aren’t welcome guests on my fruits and vegetables. But does washing really remove them? And do I have to buy a special product, or can I whip something up at home that’s just as good? Sincerely, Wondering Washer

We’ve discussed some techniques before: You can scrub waxy veggies with a brush, and you can make your own fruit and vegetable wash with bicarb soda or vinegar. (Combining bicarb soda and vinegar provides some fizzing action, but ultimately neutralises both chemicals, so there’s no real benefit to combining them.)

Fit Fruit & Vegetable Wash is the most popular commercial option discussed online, and the label makes it sound good: it supposedly removes “98% more pesticides, waxes, human-handling residues, and other contaminants” than water alone. On the other hand, they don’t provide any evidence to back up this claim, and in the very next sentence on their web site they strain credibility by asking “Why use something with chemicals to remove chemicals?”

Fun fact: Everything is a chemical, including water and Fit’s ingredients and vegetables themselves. So there’s just a little bit of hand-waving going on. Although Fit doesn’t call its product a soap, that’s what you get when you mix oils and lye, two of their main ingredients. The product also contains alcohol, glycerin, and plenty of water.

Fortunately, science can answer the question of whether soap solutions, or other substances like vinegar or plain water, can make a difference in cleaning fruits and vegetables.

Can You Wash Off Pesticides? 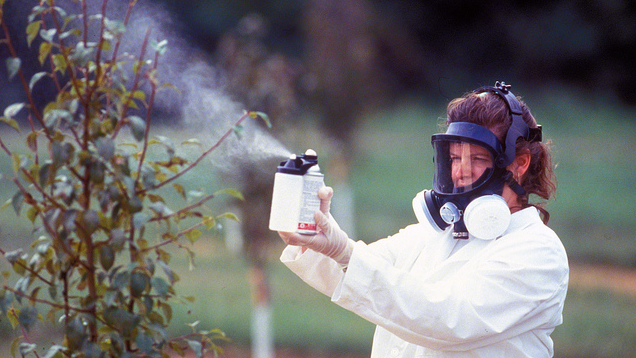 Scientists at the Connecticut Agricultural Experiment Station washed produce with running water, and found that it reduced the amount of pesticide residue for 9 of the 12 tested pesticides. What’s especially interesting is that some of those removed pesticides weren’t water-soluble — so the pesticides weren’t being dissolved in water, but rather, mechanically pushed off the produce by the force of running water.

They expanded on their study a few years later, testing four commercial produce washes, including Fit, against a soap solution (1% Palmolive) and plain running water, treating lettuce, strawberries, or tomatoes with a solution and then running under water for a full minute. They couldn’t detect any differences between how well the different treatments cleaned, but all of the washed produce — including that washed with just water — ended up with less pesticide than the unwashed controls.

Even though soap performed as well as the other washes in these studies, and it makes sense that it would be able to remove oils and other contaminants, nobody is recommending you use soap. It doesn’t have any advantage over water, and you really don’t want to end up with soap residue on your food.

There’s one other thing you have to know about pesticides on produce: even unwashed, they’re not likely to be present at dangerous levels. The same study tested the amount of pesticides found on the produce bought at stores, and concluded that they were “generally well within tolerances set by the [Environmental Protection Agency].” In other words, you can wash at least some of the pesticide off your produce, but the amount originally on your produce was probably not a problem to begin with.

One other caveat: some pesticides are either incorporated into the plant’s tissues as it grows, or are simply hard to remove. These pesticides have undergone extensive testing and aren’t a serious health hazard. So, while you can’t rely on removing 100% of pesticides, your produce probably starts with harmless amounts and washing will reduce the amount further.

Can You Wash Off Germs? 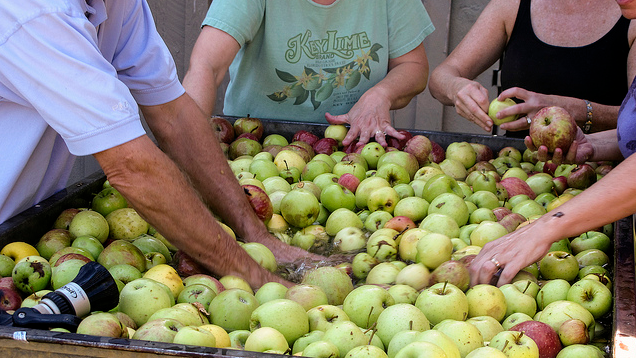 Fruits and veggies are the culprit in quite a few food poisoning outbreaks, although any given fruit or veggie is likely to be safe. (The problem is just a few bad apples, so to speak.) So washing produce isn’t just about removing pesticides: can washing remove harmful bacteria too?

Unfortunately, washing isn’t enough to guarantee contaminated food is safe to eat, although it can reduce the number of germs. Even when you soak veggies in bleach, the biofilms of bacteria living on a vegetable are hard to kill.

That said, you’re not usually faced with produce you know is contaminated; more often, you just want to hedge your bets. I don’t always wash produce, but whenever I’m pregnant I get a little more paranoid about the possibility of Listeria (traditionally found in soft cheeses and lunchmeat, but in recent years it’s popped up in fruits and vegetables.) So I wash my lettuce, even if it came pre-washed, and I choose cooked over raw veggies at least some of the time (cooking kills the bacteria for sure.)

Which wash reduces bacteria the most? Cook’s Illustrated tested a few non-commercial techniques: running water, water and a scrub brush, a soap solution, and a vinegar solution. All worked fairly well, but the vinegar wash won the contest, removing 98% of the bacteria they tested.

They used a solution made with one part vinegar and three parts water; Cook’s Illustrated editor Jack Bishop, recommends keeping the solution in a spray bottle near your sink. After spraying, rinse under cold water.

Complicating the cleaning question is the actual shape of the fruit or vegetable you’re working with. Bacteria (and presumably pesticides) can get caught in nooks and crannies. Soaking broccoli may help, but one of my local farmers teaches the “organic broccoli rule” of dunking the veggie in boiling water for 30 seconds before eating. She’s thinking about little bugs that may be hiding between the florets, but this method would kill bacteria too. Sandria Godwin, who oversaw the Cook’s Illustrated experiment, notes that bacteria tend to hide in the stem and blossom end of fruits (the blossom end being the opposite end from the stem: think of the bottom of an apple) so she recommends just cutting off both ends if you’re worried.

Final Verdict: Spray with vinegar before washing to remove the most bacteria.

Besides washing and cooking, there are a few other ways to reduce the chances of getting sick from bacteria on produce. Local food is less likely to be contaminated, just because there are fewer stops between the farm and your house, which means fewer opportunities for clean produce to end up rubbing shoulders with something not-so-clean. (Bonus: If you’re concerned about pesticides, you can also ask the farmer about what chemicals they use.)

Keeping veggies in the fridge also reduces bacterial growth, since bacteria don’t grow well in the cold. (Check your fridge temperature, by the way — it should be between 32 and 40 degrees, and the colder it is the longer your food will keep.)

Want specific directions for different types of food? Here’s a guide. Basically, tough veggies can be scrubbed, and leafy ones should be swished in water or rinsed as individual leaves.