As you’ve doubtlessly seen on social media, Cadbury is partnering with Vegemite to create a new chocolate block flavoured with yeast extract. No really. This controversial sweet isn’t set to hit shelves until next month, so we thought we’d beat Cadbury to the punch with a homemade version. We then fed the concoction to our horrified coworkers. Here are their reactions.

When it comes to bug-nuts crazy food experiments, Vegemite-flavoured chocolate is pretty far out there. The brackish breakfast spread is already highly decisive; adding chocolate to the mix sounds disastrous. On the other hand, salt and chocolate have proven to be agreeable bedfellows, so maybe the concept isn’t that mental after all?

On June 1, Australians will discover whether their favourite spread works as a sugary dessert. But for impatient types, it’s entirely possible to brew your own: all you need is a block of Cadbury’s milk chocolate, a few spoonfuls of Vegemite and a suicidal disregard for your own taste buds.

To make my DIY version, I tempered the chocolate in a saucepan and periodically added a few squirts of Vegemite from one of those toothpaste tube-esque dispensers. This provided more control than a traditional jar and meant I didn’t have to faff about with a spoon.

When cooking with chocolate, you want to keep the temperature consistent and relatively low: around 45 degrees Celsius is usually recommended for tempering. The trick is to entirely melt it while avoiding over-crystallisation. I’d strongly advise against using a microwave — the chocolate won’t melt properly and nuked Vegemite tends to have a weird, stinky taste.

As this is an entirely untested food combo, I was relying on pure guesswork to get the balance right. I wanted the Vegemite flavour to be noticeable without completely overpowering the sweetness of the chocolate. All told, the ratio was approximately one tablespoon of Vegemite per 200g of chocolate. 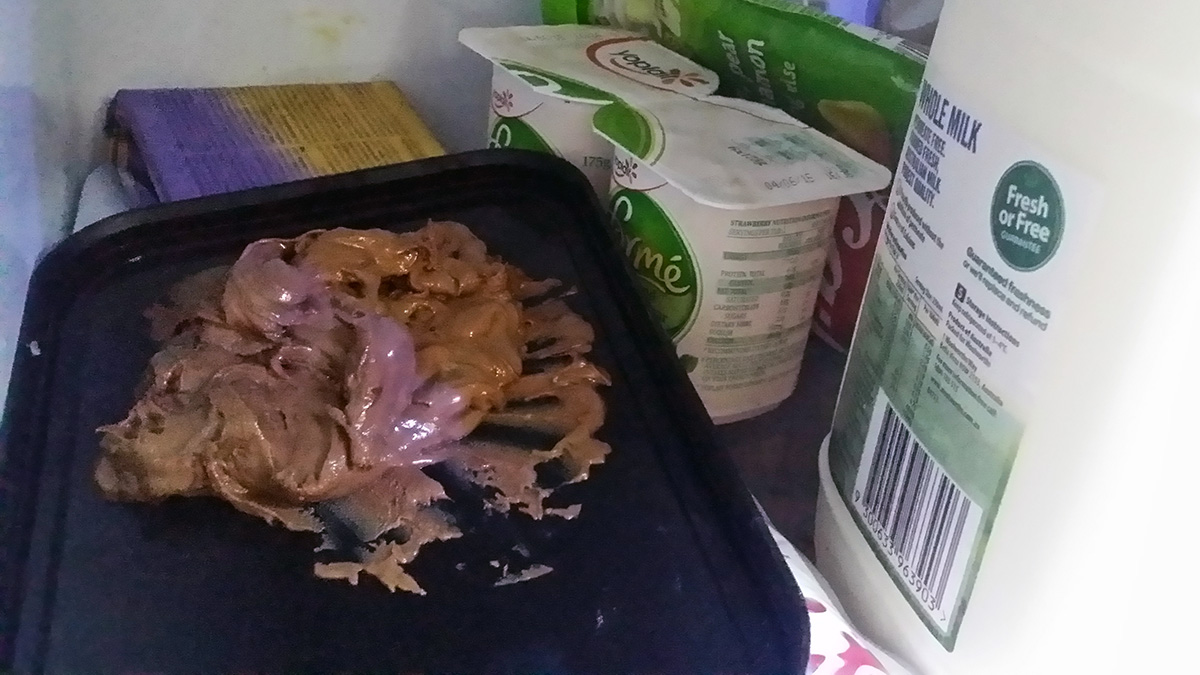 Once I had a good mix going, I poured the gooey solution into a lunch box lid and stuck it in the fridge overnight. My hope was that the shallow, rectangular receptacle would form a suitable chocolate mould. Unfortunately, the results ended up looking more like a particularly messy dog poop that would compel you to make an emergency trip to the vet. But this is about the taste, damn it!

To avoid accusations of bias, I foisted my noxious creation on a bunch of unsuspecting colleagues as opposed to reviewing it myself. Considering I pulled the recipe entirely out of my arse, the consensus was (mostly) positive. Here are their verdicts:

Angus Kidman, Lifehacker editor: “As I’ve noted before, I love Vegemite with a sick salty passion, so this would have needed to stink of rotting fish for me not to enjoy it. It’s perfectly acceptable. I’d like to see the Vegemite blended into the chocolate a little more effectively, but I was surprisingly taken with the flavour of Chris’ home-made version. On Masterchef he would be totally failed for plating though!”

Danny Allen, publisher: “Curious glee consumed me as I dabbed the melting Vegemite turd onto my taste buds. As a lover of genetically-spliced gastro-monstrosities such as chilli, bacon, sea salt, caramel chocolate and more — this would be interesting. Except it wasn’t. The salt profile was pronounced, but the umami similarities of chocolate and Vegemite turned what could have been a Lambada into a sleepy waltz.”

Sarah Kimmorley, Business Insider online journalist: “It’s a subtle difference, almost not enough to notice — however I admit to being able to eat vegemite off a spoon so maybe I have a high tolerance to salt. Either way if anything it tastes similar to a salted caramel. Definitely not bad but I won’t be buying it until they bring it out in dark chocolate!”

Mark Serrels, Kotaku editor: “What’s this? No. Can’t be. What?” [takes a tiny bite] “Really? What? How? No. No. Really? [Takes another bite] This is… kinda delicious.”

Jessica Chandra, POPSUGAR Australia Managing Editor: “Hmm. Where do I go with this? Chris’ homemade version of Vegemite chocolate was interesting. It wasn’t super-appealing to the eye — yes, it did look like a mound of *insert poo emoji here* — but I applaud his success with getting Vegemite “chunks” throughout the chocolate. 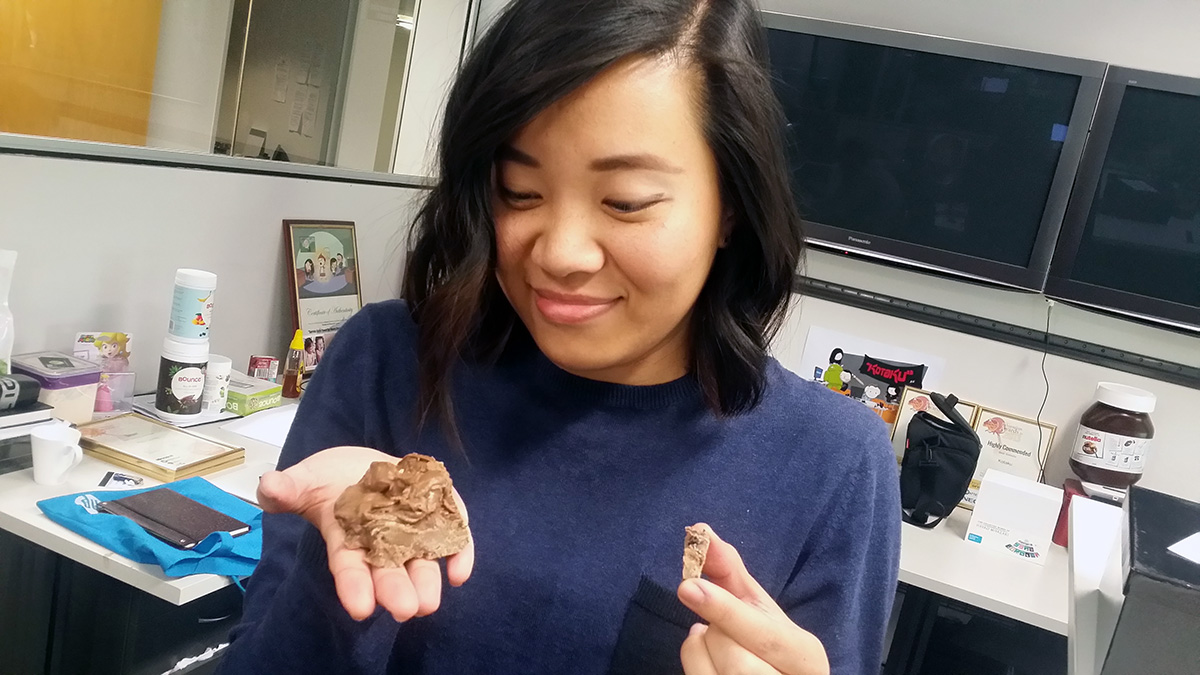 “As for the taste, it wasn’t as bad as I thought it might be. You get the sweetness from the chocolate, and then in the same mouthful the saltiness from the Vegemite. In fact it was probably more the melted-down and re-solidified chocolate that tasted stranger than the combination of flavours…Keen to have a taste of Cadbury’s actual product!”

Rae Johnston, Commercial editor: “I expected the saltiness of the Vegemite to enhance the flavor of the chocolate. Like when you get a nice dark chocolate with added sea salt. But the flavours seemed to do nothing but co-exist in my mouth. Combining them didn’t really change them in any way. It was…weird. Not unpleasant, though.”

Matt McDonald: “I give it a solid 7.5/10. It reminds me of the salted chocolates that seem to be popping up around the place. Aftertaste isn’t too bad but it does linger a touch. For vegemite fans only.”

Mia Steiber, Editorial Assistant: “It tasted festy. Chocolate and salt is quite a nice combination but this is not. It’s gross and I won’t support this concept. The yeasty bitterness of vegemite ruined the chocolate and the sweetness of the chocolate ruined the vegemite. Basically two lovely delicious things were spoilt by combining them together. I am unhappy about it.”

Peter Terlato, Business Insider journalist: “I was pleasantly surprised. I’m a huge fan of Vegemite as a spread and while initially the taste was a strange mix of salty, sour and sweet, the lasting flavour was moreish. If Cadbury can get the ratios right, it’ll put a rose in every cheek!”

Keen to concoct your own batch? Send in your recipes/photos and we’ll publish the most impressive creations!