Microsoft Office For Android Now Available To All

Published 6 years ago: May 20, 2015 at 6:00 am
To sign up for our daily newsletter covering the latest news, hacks and reviews, head HERE. For a running feed of all our stories, follow us on Twitter HERE. Or you can bookmark the Lifehacker Australia homepage to visit whenever you need a fix.

Back in May, Microsoft released a preview of Office for Android phones. Now, Microsoft Office is available to all, no need to join the community on Google+ for beta permissions. You can check out Word, Excel, and PowerPoint on Google Play, and see our original post on the apps below. 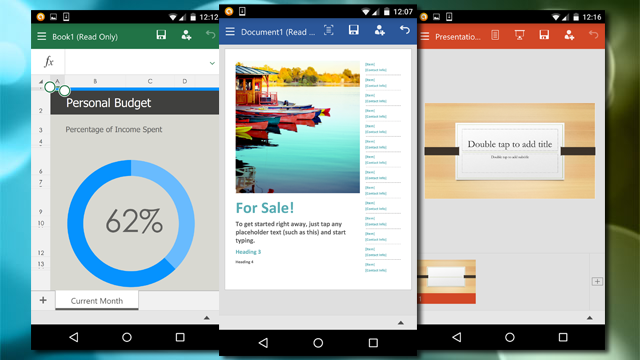 Want to edit Word, Excel, or PowerPoint docs from your Android phone? You can now test them out in the new Office Preview apps.

The apps are optimised for touch and smaller screens, with the ribbon menu at the bottom of the screen instead of the top for thumbs-friendly editing. The Office apps also connect to not just OneDrive, but also SharePoint, Dropbox, Google Drive, and Box.

To try the apps out yourself and possibly influence the final version of Office for Android, you have to join the Office for Android community on Google+, then download the Word, Excel, and PowerPoint apps from Google Play. Microsoft says the permissions could take up to 4 hours to replicate before the apps are available, but I was able to install them and they look pretty nice.