Red Rooster has teamed up with SumoSalad to bring a range of gourmet sides to its fast food restaurants. The new salads have been specifically designed to complement roast chicken and are (reasonably) healthy to boot. We recently gave the Zesty Pumpkin Couscous version a try to see if it measures up to Sumo’s official salads. Here is our verdict.

The introduction of Sumo Salad is part of a big push by Red Rooster to appeal to health-conscious consumers. Last year, the company removed all artificial colours, flavours and added MSG from its menu and now its ramping up its “healthy eating” options.

The company reckons its new salads are just as good as anything you’d find on a homemade dinner table: its advertising campaign attempts to illustrate this fact via a blind taste test:

To put Red Rooster’s claims to the test, we ordered a large Zesty Pumpkin Couscous salad alongside an order of roast chicken. The salad comes with butternut pumpkin, capsicum, couscous, shallots and pumpkin seeds in an olive oil citrus dressing and packs in a reasonable 744kJ of energy. (The other Sumo Salad option — Red Pesto Penne — weighs in at a decidedly more hefty 2205kJ.)

At first glance, I was a little disappointed by the size of the salad: Red Rooster is pairing the large version with a whole chicken, so I was expecting it to feed at least four people. However, the salad is more generous than the packaging suggests: they really cram that couscous in there!

If you’re a fan of Sumo salads, we imagine you will be pretty pleased with this Red Rooster version: the ingredients are fresh tasting, the vinaigrette is suitably light and the chief components complement each other well. (This also applies to the roast chicken: the grease adds a moreish element to the couscous and vegetables.)

If we have one complaint, it’s that the pumpkin pieces are a bit scarce. They’re also diced a bit too small for our liking. As you can see from the below photo, it’s not the dominant ingredient by any stretch of the imagination: 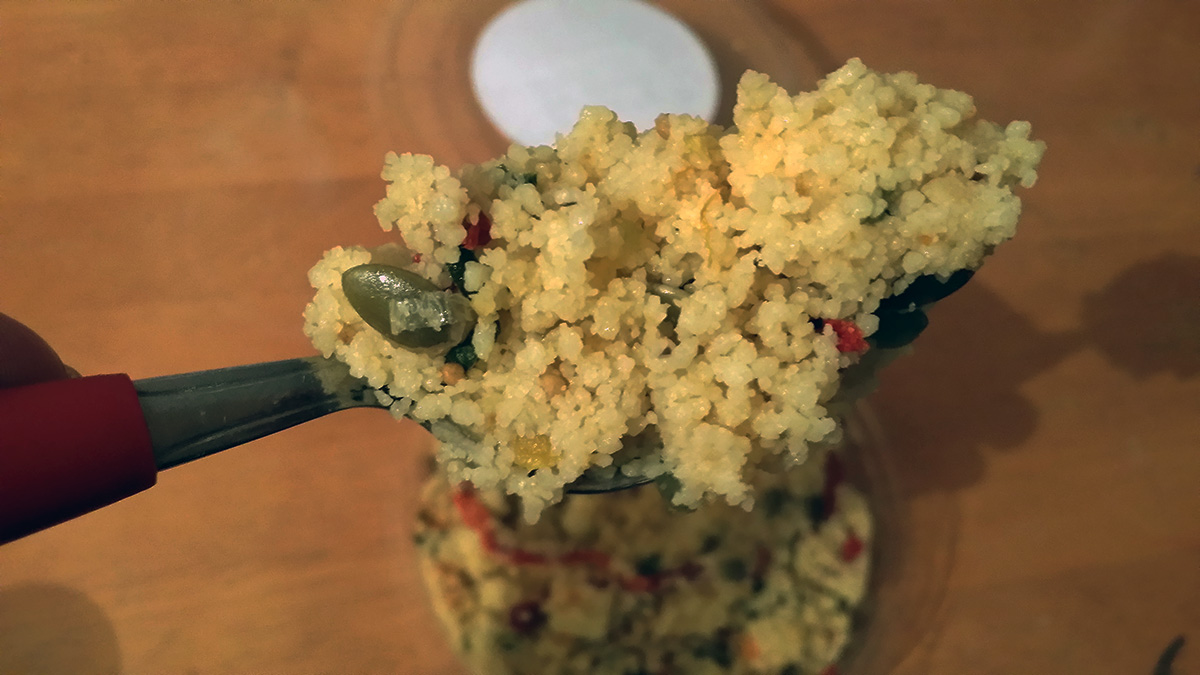 But this is a relatively small quibble. For an affordable fast food salad, this is about the best that could be hoped for. If anyone has tried the Red Pesto Penne version, let us know what you thought in the comments section below.