How To Survive Being Stranded Overnight In An Airport Terminal

Last night, I did something I’ve managed to avoid in over a decade of frequent flying: I slept through my alarm and missed my plane by mere minutes. Due to a series of unfortunate events, I also missed the connecting flight at the other end (basically, my make-up flight was delayed and then my bag got falsely pinged by security. Tch.)

With no more flights to my destination until the next morning, I was presented with two equally ghastly choices — I could either put myself up in a cheap hotel and go through the whole check-in process again tomorrow, or spend the night in the terminal with the other lost souls. Because I’m mental, I went with the second option.

Most airports will permit stranded passengers to remain in the terminal overnight, provided they have a valid ticket and the relevant documentation. However, you don’t have free run of the place to play tag or perform Dawn Of The Dead re-enactments. Instead, they expect you to stay put in a designated area.

At around 12am, airport security corralled us all into the same departure gate which was promptly cordoned off to discourage exploratory wandering. It all felt a bit concentration campy; especially when I stared into the hopeless, sleep-deprived eyes of the other passengers.

In the end, it turned out to be a pretty uneventful night, but I did pick up a few tips that might help if you’re ever in a similar situation. 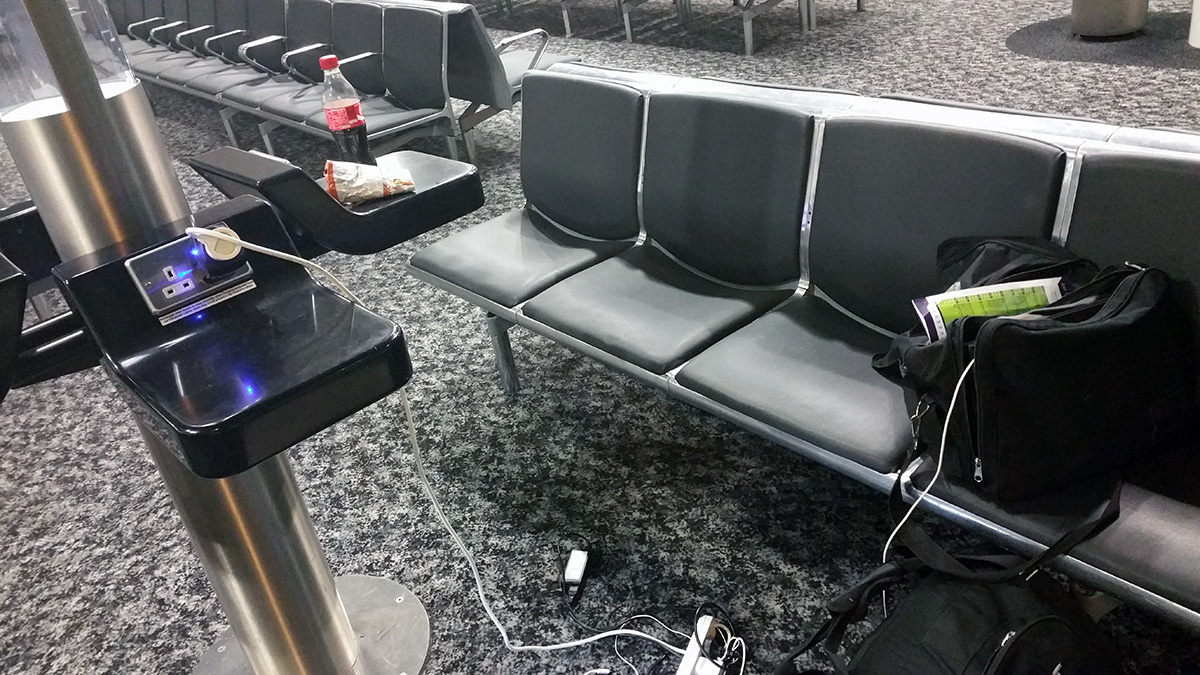 With limited spaces to go around, you need to grab a prime piece of real estate before anyone else can nick it. Charging stations are guaranteed to be in short supply, so make that your first port of call. 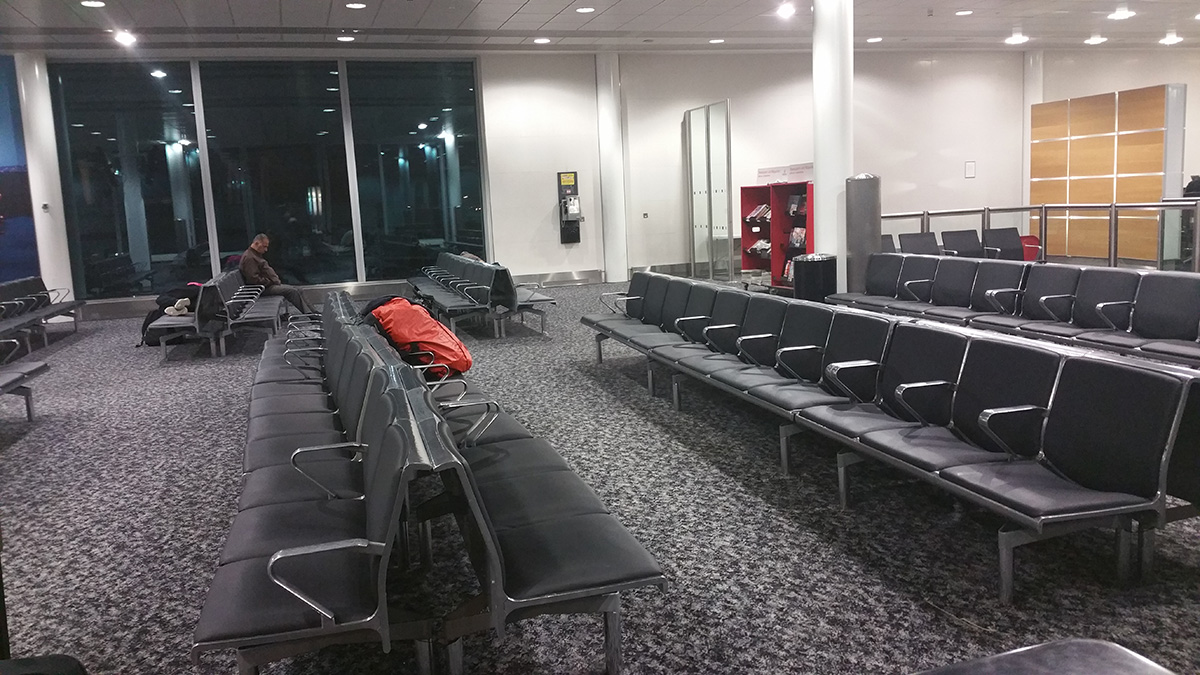 Another thing to be mindful of is furniture you can’t sleep on – as you can see in the above photo, some seats have arm rests and some don’t. If you get stuck in an arm chair row, you’re going to be sleeping on the cold, hard floor.

Get over yourself and eat some junk food 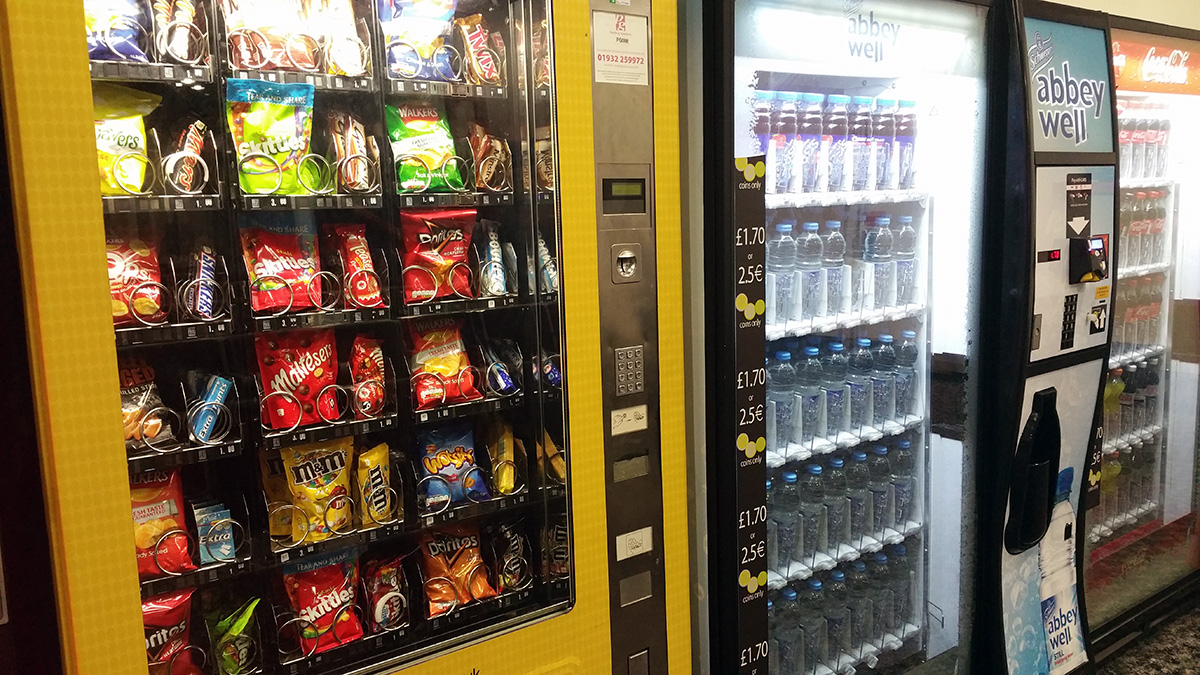 When the hunger pangs start, you’re going to be limited to two food types: salt and sugar. Unfortunately for health nuts, there are no salad or fruit dispensers in the majority of airports. This means you’re left with crisps, chocolate or soft drink. It’s going to be a long night, so treat it as a cheat day for the sake of sanity and sustenance.

Have your own reading material 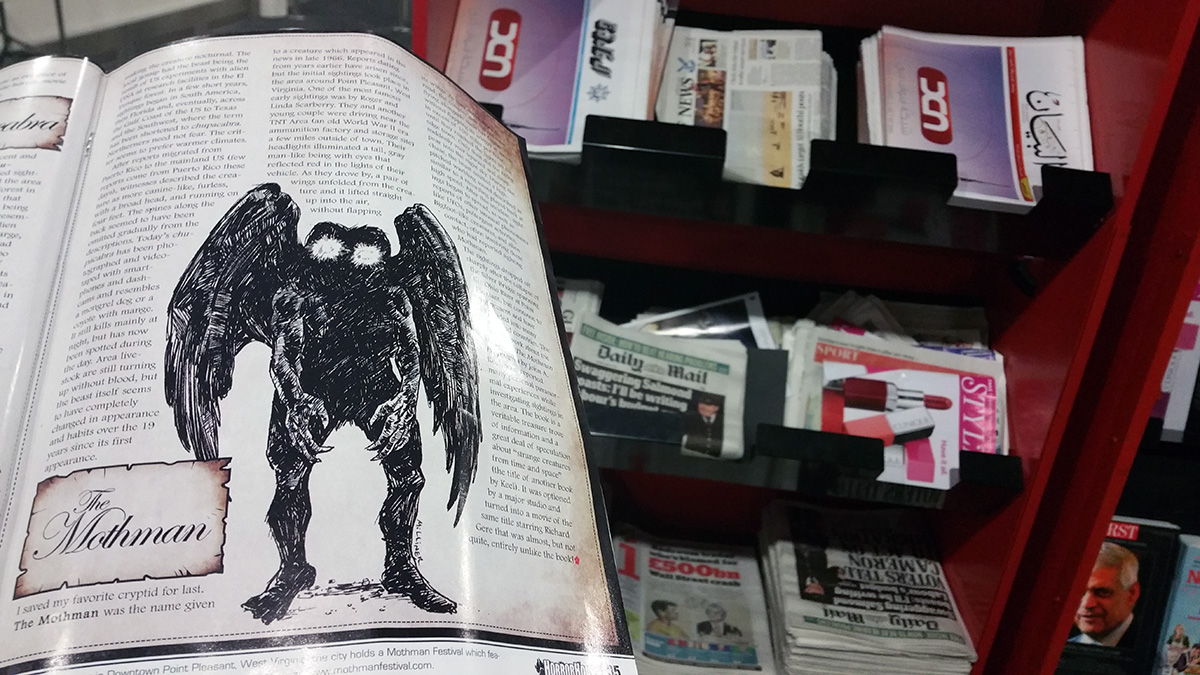 Unless you fancy reading Time magazine or a foreign newspaper, it pays to have your own reading material on hand. This is especially important if you don’t have internet access. 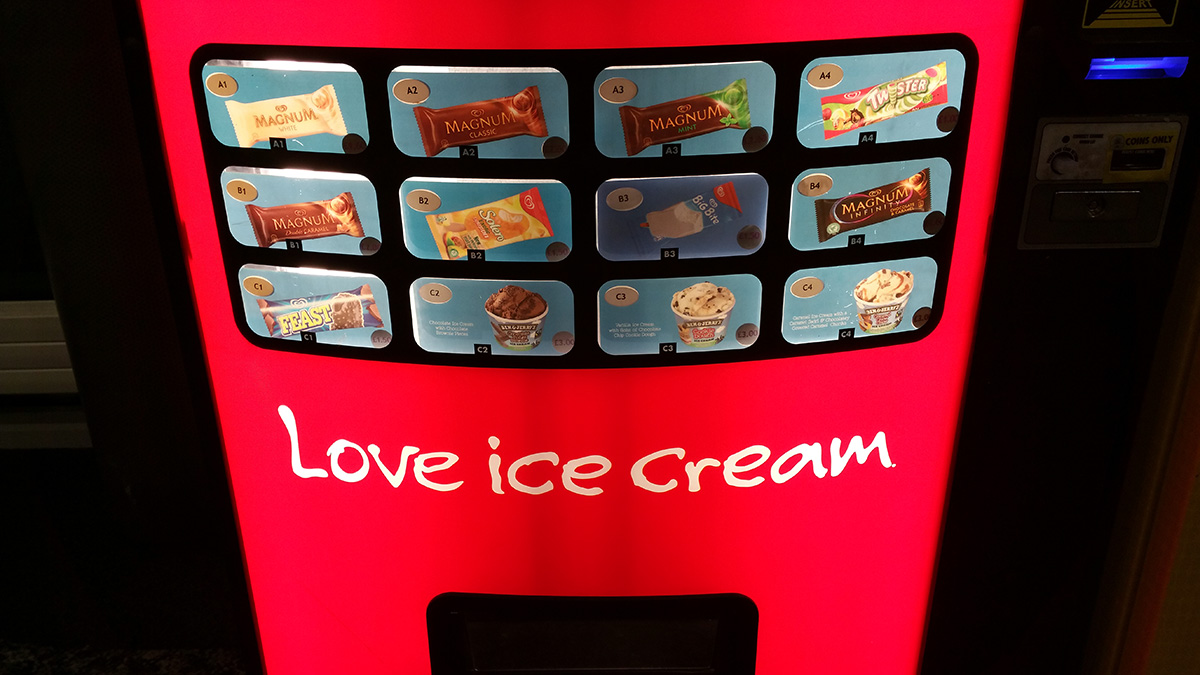 It’s only for one night. Go bananas and screw the consequences! 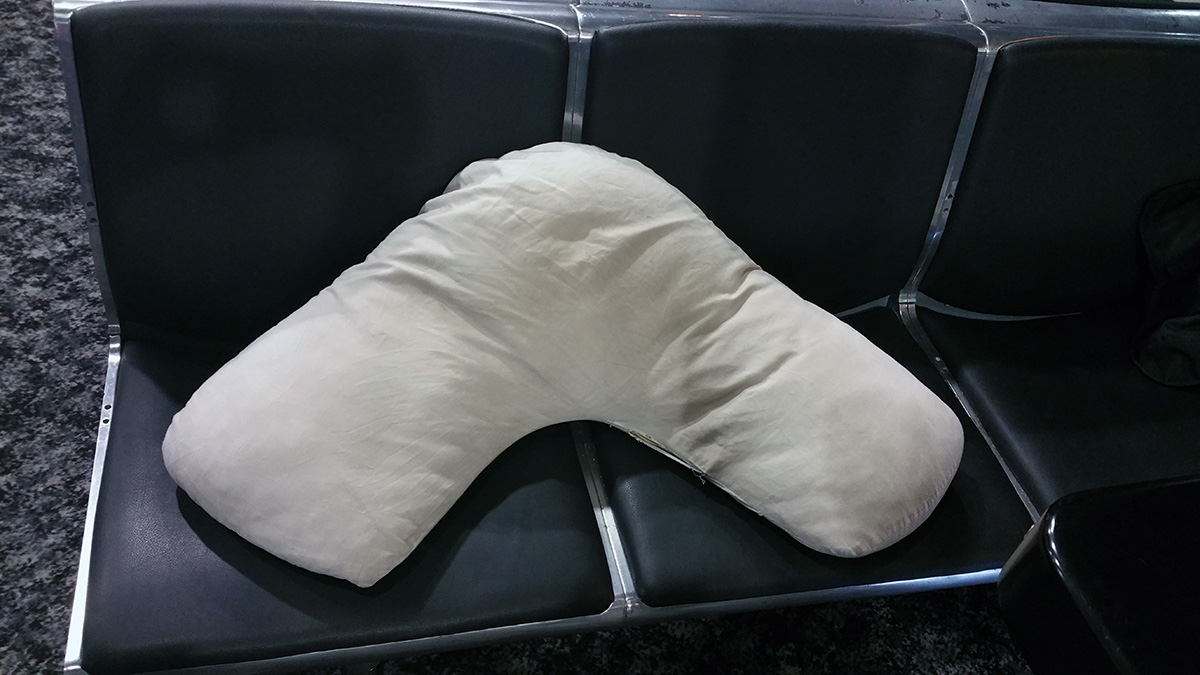 How they all laughed when I walked into the airport with my huge carry-on pillow. Well, WHO’S LAUGHING NOW? EH? EH?! I am. In my sleep. 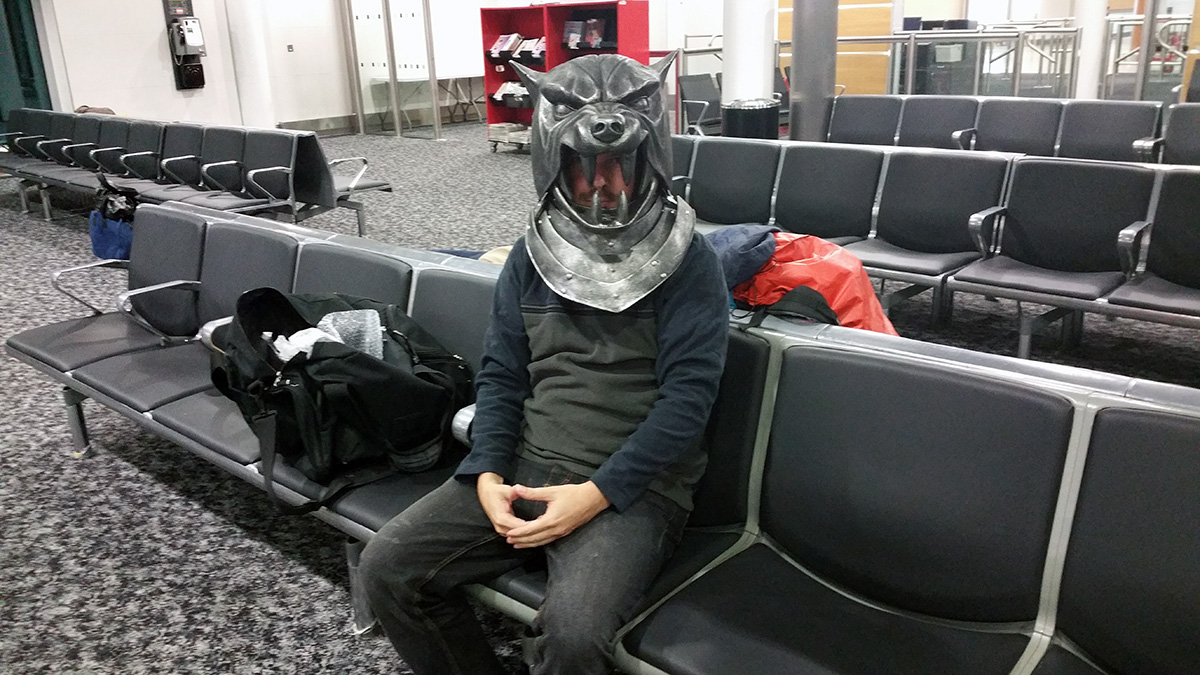 You’re stranded at an airport so you might as well have some fun. (In the unlikely event that you don’t have an official Game Of Thrones helmet on you, make one out of toilet paper.)

See also: How I Survived The 33-Hour Flight From Hell