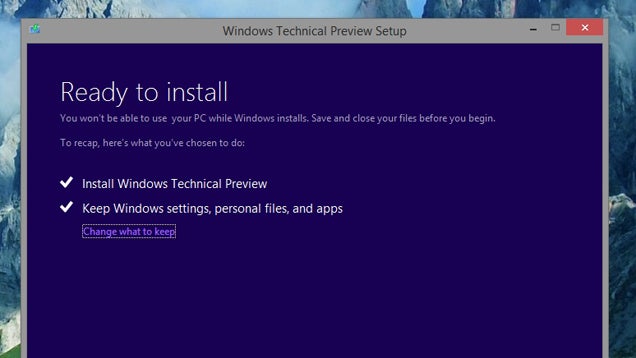 Few things are more annoying than a Windows system loaded with unwanted “utilities” by the hardware manufacturer. A change in approach for Windows 10 means you’re likely to see less of that unwanted rubbish.

A recent post on the official Windows blog explains that one of the aims for Windows 10 is to make the recovery image — used to rebuild a system if Windows goes heavily off the rails — as small as possible. That’s particularly important on tablets and phones, which only have limited storage to begin with.

With previous Windows releases, manufacturers have been able to define their own recovery image, which means they can include their own tools (and third-party crapware) on top of the default Windows build. That takes up more space and means that unwanted software will reappear if you do a system restore.

However, that won’t be allowed with Windows 10:

We are also redesigning Windows’ Refresh and Reset functionalities to no longer use a separate recovery image (often preinstalled by manufacturers today) in order to bring Windows devices back to a pristine state. This reduces Windows’ storage footprint further as the recovery image on typical devices can range in size from 4GB to 12GB, depending on the make and model.

Sounds good to us. In corporate environments a standard image is often used across systems anyway, but as bring-your-own-device continues to become more common, knowing there won’t be a lot of unwanted junk on new systems is good news. While this approach doesn’t entirely stop manufacturers adding their own tools on new hardware, if this approach works properly a simple system restore should now wipe it out.

Windows 10 is expected to launch by the end of September, though an exact date hasn’t been set.