Improve Relationships By Checking Your Phone Only While Alone 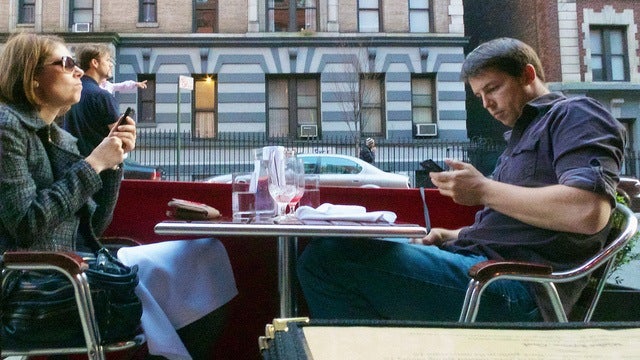 It's easy to become addicted to your smartphone and completely ignore the world around you. We all do it to some degree. But what would our relationships be like if we put away the phone and started paying attention to people?

The Muse's Aja Frost explores this idea. She noticed a co-worker who vowed to only use, check and even look at his phone when he was alone. Frost says his conversations with others were noticeably more engaging. She decided to try it herself:

I didn't tell anyone about my phone ban, and no one said anything. Whether or not they consciously noticed, however, people really seemed to respond. They could tell they had my undivided attention — not only was I not doing that half-nod, half-scroll thing, but I wasn't even thinking about checking my phone. My listening skills went through the roof.

As a result, people were much more engaged. When we were discussing something light-hearted, they smiled and laughed more. When we were talking about something serious, they were more honest and thoughtful. I even noticed people initiating conversations with me more. Instead of just saying, "How's it going?" as they passed by me in the hall, they'd stop and ask what project I was working on or what my plans were the weekend were. The take-away: Putting away your phone makes people feel appreciated and respected.

Of course, this is anecdotal evidence, but studies back up Frost's experience. Plus, it just makes sense. It's almost impossible to feel engaged in a conversation when the other person is constantly looking down, checking their phone.

You might be worried about neglecting a text or email while you're hanging out with someone in person. After all, ignoring someone's text could have a negative impact on that relationship, too. But there are plenty of workarounds for this.

For example, if someone is waiting to hear back from you, Frost suggests sending them a message to let them know you'll be unavailable for a time. Also, if you tell everyone you're in the habit of turning your phone off when you meet people, they will know not to expect an immediate reply.

If you don't need to be connected to your phone at all times, you might consider turning it off and engaging your in-person interactions a little more. You might be surprised at the difference it makes.

David Murphy 30 Mar 2020 9:30 AM
Even Zune-clutching Windows loyalists have to admit that Mac owners have it pretty great—at least, they do now. Apple hasn’t charged for macOS, nor macOS updates, for years. Of course, you need to buy your computer from Apple to use macOS (pretty much), but at least the operating system is free. Windows ... not so much. While your new desktop or laptop computer is almost guaranteed to come with a copy of Windows 10, the price for the OS is probably factored into whatever you paid for your system. Build your own PC, and you’ll have to pay for a copy of Windows 10 yourself.