The Antidote: Self-Help For People Who Can't Stand Positive Thinking 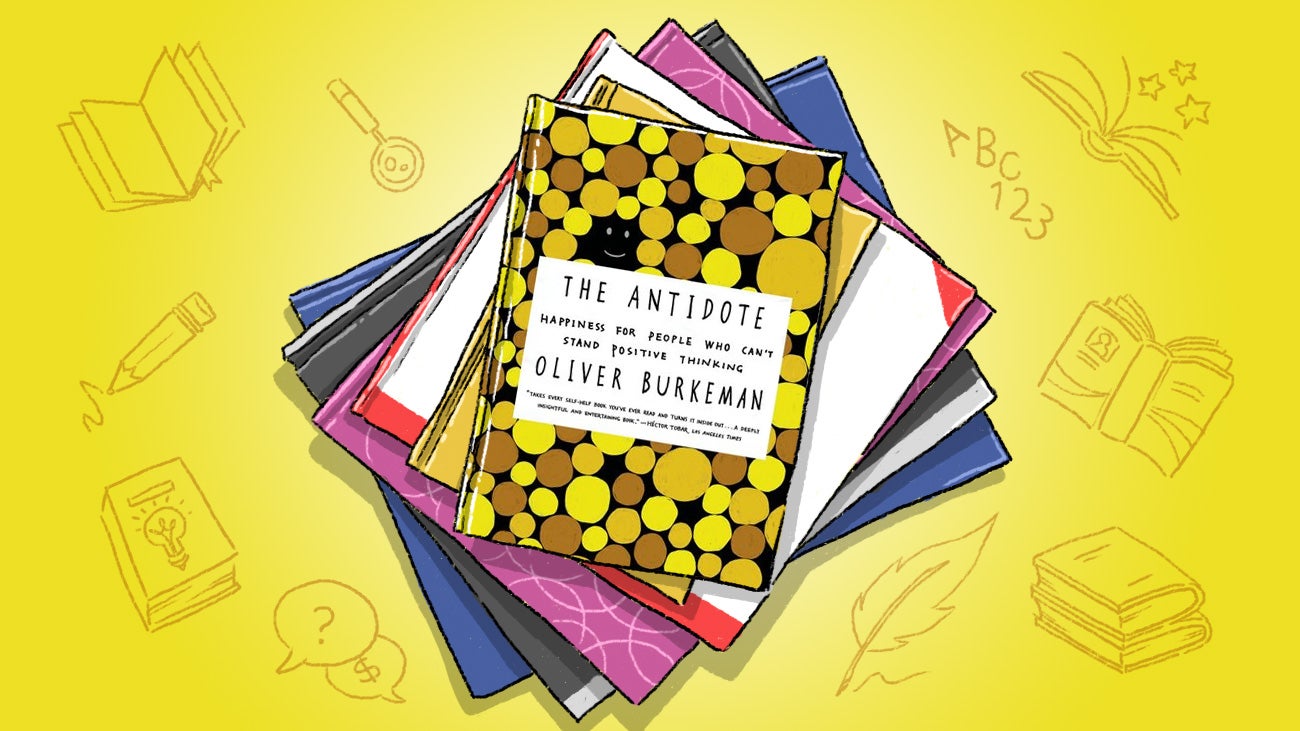 Everyone wants to be happy. But despite our goal to be happy, many of us still go through life unfulfilled, unsatisfied, and stressed out. Oliver Burkeman's The Antidote won't bring you instant happiness, but it does share some extremely helpful guidance on how to weather life's hardships.

The subtitle for this book is "Happiness for People Who Can't Stand Positive Thinking", and it's accurate. The Antidote takes a lot of conventional advice on positive thinking and turns it on its head. It's a self-help book for people who are sick of the typical "be positive" self-help books (although you'll enjoy The Antidote even if you love positive books). It injects hope without making you roll your eyes.

Small portions of the book share themes reminiscent of Ryan Holiday's The Obstacle is The Way (which we previously reviewed) and Malcolm Gladwell's David and Goliath. For the most part, if you found those two books useful, you'll probably enjoy this one as well.

Author Oliver Burkeman shares his own experience with (and dislike for) self-help positive thinking. Despite this, he embarks on his search for a deeper understanding of happiness, leading him to places like the Albert Ellis Institute (which the founder berates its members for their own benefit) and the Insight Meditation Society. He also gathers information on happiness through interviews with people like The Power of Now author Eckhart Tolle, and through studying the work of philosophers Seneca, Alan Watts, and Erich Fromm.

Burkeman combines wisdom and advice from this diverse range of sources and splits his knowledge into eight chapters, some of which include:

One of Burkeman's main points is a counter-intuitive one: You're not happy because you're trying too hard to be happy. He quotes philosopher John Stuart Mill: "Ask yourself whether you are happy, and you cease to be so."

Burkeman elaborates on this point:

A person who has resolved to 'think positive' must constantly scan his or her mind for negative thoughts — there's no other way that the mind could ever gauge its success at the operation — yet that scanning will draw attention to the presence of negative thoughts.

When we're attempting to stifle negative thoughts or drown them out with positive ones, we end up achieving the very outcome that we tried so hard to avoid. It's similar to when someone challenges you not to think of a white bear, just for a minute. What's on your mind right now?

One Trick You'll Take Away

One of the most interesting points Burkeman discusses is about goal setting. Even though it may sound like a fluffy "high-level" task, setting a goal and deciding on its importance is crucial to how your life unfolds. You may have a certain goal or milestone you're aiming for by a certain age to "achieve" happiness. Burkeman tells a story of a person who wanted to be a millionaire by forty:

During one course he taught, Chris Kayes recalled, 'an executive came up to me at the end of a session and told me his goal had been to become a millionaire by the age of forty. That's something you hear all the time in business schools. And he'd done it — he was forty-two, so he was right on target. But he was also divorced and had health problems. And his kids didn't talk to him anymore.'

Glory, ego and pride don't necessarily bring happiness and fulfilment. Worse yet, they may produce outcomes that you hadn't expected. Burkeman writes:

As Chris Kayes pointed out, the mountaineers who died climbing Everest in 1996 did successfully reach their goal: they ascended to the summit. The tragic unintended consequence was that they didn't make it back down alive.

It's a simple reminder that, for some reason, a lot of us forget in the midst of daily stresses and routines. That's not to say that you shouldn't dream big. However, be mindful of the goals you're setting and everything that may surround those goals — what you'll have to give up, what drawbacks the goal comes with, and so on. Is your goal going to make you more enviable, or something that you're really curious and excited about? Pursuing your goal at the expense of everything else, or overlooking other risks, can lead to some unpleasant surprises and regret.

I first explored self-help as I was graduating high school (shout out to Tony Robbins' Unlimited Power). I found Burkeman sharing excellent advice that I had only found in bits and pieces of various other self-help or philosophy books. It reminds us that simply throwing more effort into "trying" to be happier won't necessarily make us happier — and the things we think will make us happy really might not. Burkeman also reminds us of the power of negative thinking by pointing out the benefits to things that seem to be disadvantages, like failures and personal insecurities.