There are some things in life that just go hand in hand: peaches and cream, Simon & Garfunkel, jockey shorts and Ryan Gosling. Unfortunately, it would seem McDonald’s and home delivery do not make a perfect duo. In fact, the results are pretty horrendous.

The service launched in the country back in August, 2014. My local McDonald’s in Stanmore, Sydney, was one of the first outlets to do home delivery but I had yet to try it. With McDonald’s expanding its locations for delivery, I decided it was time to dip my toes and taste buds into this uncharted territory. (Lifehacker’s resident Taste Test reporter, Chris Jager, lives out in the sticks of the Blue Mountains, so I agreed to take one for the team.)

I had my reservations. We’re dealing with food here that can go from great to gross in the space of five minutes. That’s partly why McDonald’s slaps their burgers together to order and food is always cooking.

Yet, I remained optimistic. Stanmore Maccas was about a five-minute drive (or a three-minute scooter ride) from my house. The food should remain moderately fresh. Even if they hit every red light, it couldn’t possibly take longer than 10 minutes to get here.

After doing some rudimentary mathematics in my head, I put through my dinner order of $25 worth of McDonald’s food, which is the minimum amount for delivery. This is pretty high compared to other home-delivered takeaway services. If you’re not ordering for a group, you’re going to need a very big appetite. Here’s what I ordered and why:

The ordering process, which is handled by Menulog if you go through the main McDonald’s website, is simple enough, with a robust menu featuring accompanying thumbnail images of the food and beverages available. The layout could be neater as it looks cluttered, making it annoying to navigate. 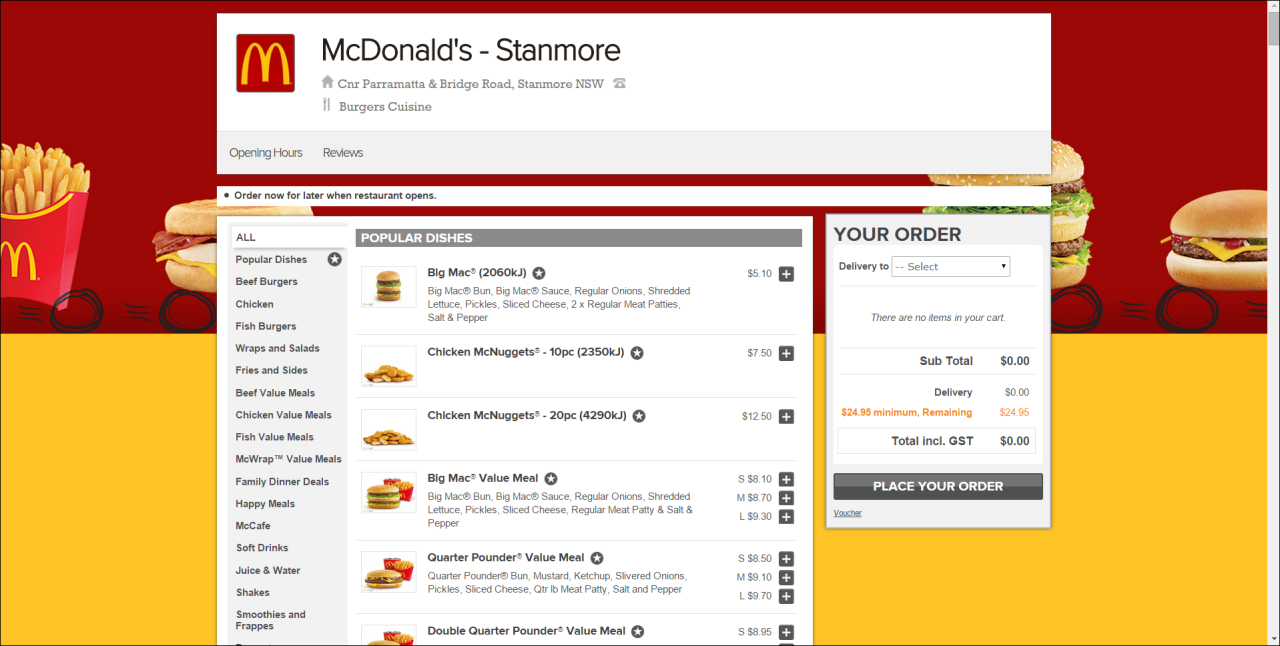 The online menu somehow manages to be basic and cluttered at the same time.

I was willing to overlook the website’s shortcomings… But what I couldn’t stomach was how long it took for the food to arrive (or the food itself, which I’ll get to in a moment.) After several repeated phone calls, two reassurances that my food was on its way followed by a series of ignored calls, my food arrived just over an hour after I had placed the order. When you consider McDonald’s uses a ready-made menu, this is a ridiculously long waiting time.

Struck with a severe case of the ‘hangries’, I wasn’t the most pleasant patron when I greeted the deliveryman… and then it got worse…

He also tried to get the receipt back (which had his name on it) after I told him I’d be doing a review about this for Lifehacker, which did not go down well with me.

I don’t think there’s much more to say about the food. Aesthetically, the food looked fine but it was stone cold. This really sucked the deliciousness out of the food. I imagine this is what it’s like to eat fancy plastic food models: with every bite, my life got a little sadder.

My friend who ordered the Fillet-O-Fish described it best: “Usually I regret eating Maccas afterwards… But I’m actually regretting it as I’m eating this.”

I did attempt to salvage the fries and the saving grace of this whole experiment was discovering heating McDonald’s fries in an oven makes them taste more delicious. But that could not salvage the McDonald’s experience which left a bitter taste in my mouth that not even a soft serve could wash out.