The Raspberry Pi 2 was announced last week to mostly positive reactions from enthusiasts, despite no warning of its impending release. The upgraded board computer boasts a quad-core 900MHz ARMv7 SoC and 1GB of RAM over its predecessor, the Raspberry Pi B+, while retaining the same dimensions and a good deal of backwards-compatibility. The Pi 2 arrived at the perfect time for me — I wanted to build a media centre with some flexibility, and the board offered the perfect compromise between tweaking and ease-of-use.

Getting A Raspberry Pi 2

For Australians, you have a few options. After investigating a number of retailers I went with Element14, as it offered the cheapest price ($38 excluding GST), charges in AUD and ships from a local source.

I knew I was going to order more than $45, as I had none of the required accessories, which meant I’d get free delivery too. Combined, it was far too good a deal to pass up.

At the time of writing, the price has gone up to $41, no doubt due to demand. Fortunately, stock seems to arrive frequently — I only had to wait a few days for my backorder to be filled.

All Of The Accessories

It’s common knowledge that the Pi costs more than its $US35 price tag, when you add in all the bits necessary to make it useful. Unless you already own a B+ or earlier model, chances are you’ll need to pick up a few extras to get up and running.

Here’s a list of components I ended up buying, in addition to the Pi 2 itself. Note that all of these were purchased from Element14. Prices are in AUD and do not include GST:

MULTICOMP-MC-RP002-BLK-ENCLOSURE, $10.00 The basic plastic enclosure to keep the Pi 2 protected from the elements of my living room.

SAMSUNG-MMCTR08GUBCH-RMLMK-FARN/KIT-MEMORY, $11.60 An 8GB Samsung microSD card with SD adaptor. This comes with Raspberry Pi’s New Out Of The Box Software (NOOBS) pre-installed, but you’ll need to grab the latest package from the Pi website, as the one I received was for the old model.

DYNAMODE-CR-31-CARD READER, $8.16 Run-of-the-mill USB card reader. Nothing fancy here, I needed a way to access the SD card on my desktop.

I also picked up a 5m Cat6 cable as I guessed (correctly) that the WiFi dongle would require additional setup. All up, the total was $110.33, including GST. Deliveries are handled by Toll Priority.

All the items I requested were available and shipped the same day, except for the Pi 2, which was back-ordered and posted separately a few days later. Everything had arrived by 6 February, having been ordered on the 3rd. I wasn’t expecting it all to arrive so quickly, though I’m certainly not complaining.

You’ll find a group shot of everything I purchased (excluding the ethernet cable) in the lead image. Below is a close-up of the box.

Once opened, you’ll find a thick manual and the Pi 2 board inside a static bag. 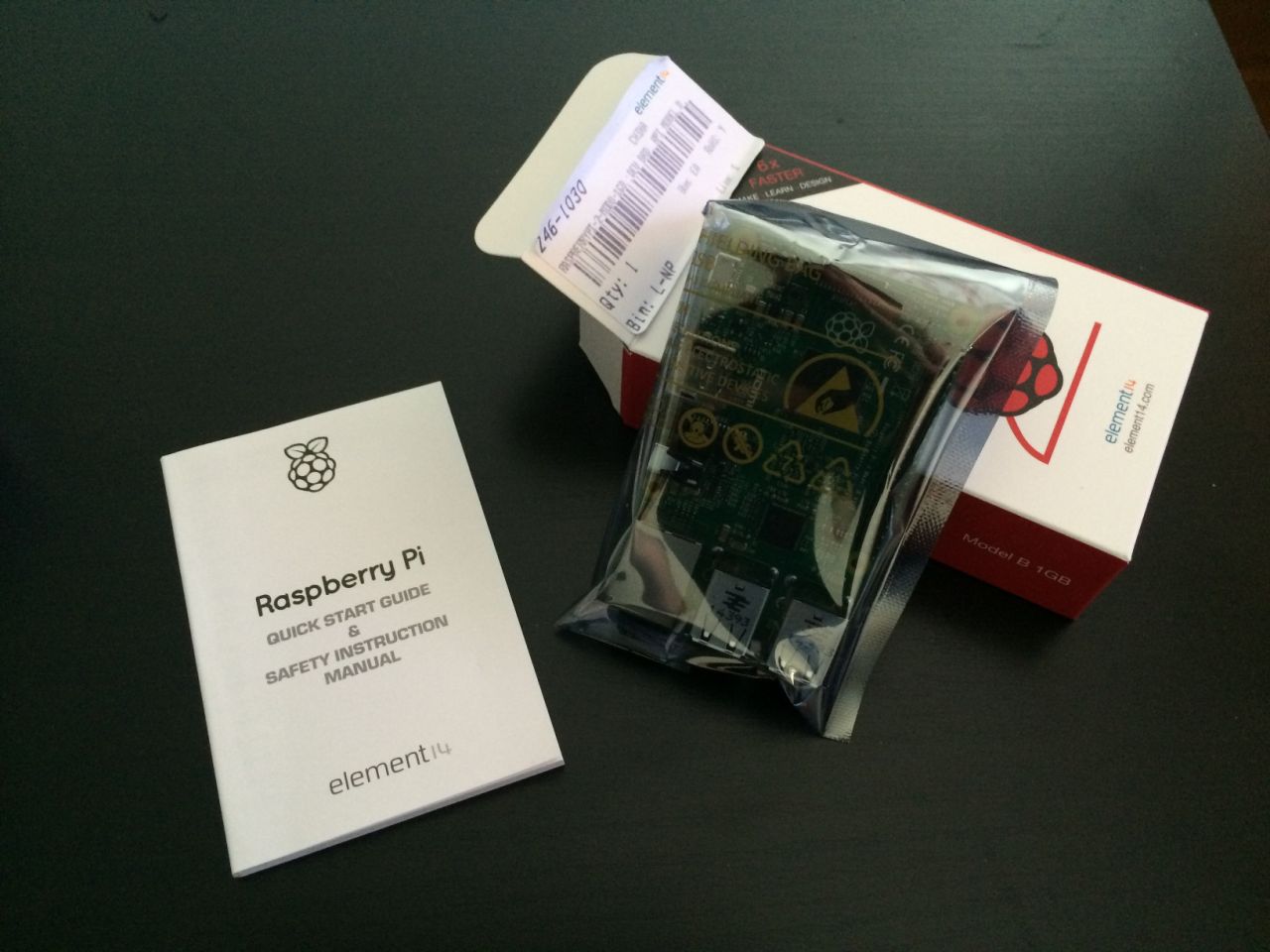 If you’ve never seen a Raspberry Pi in the flesh, well, this is as good as it gets. I’ve placed a 20-cent piece next to it for scale. 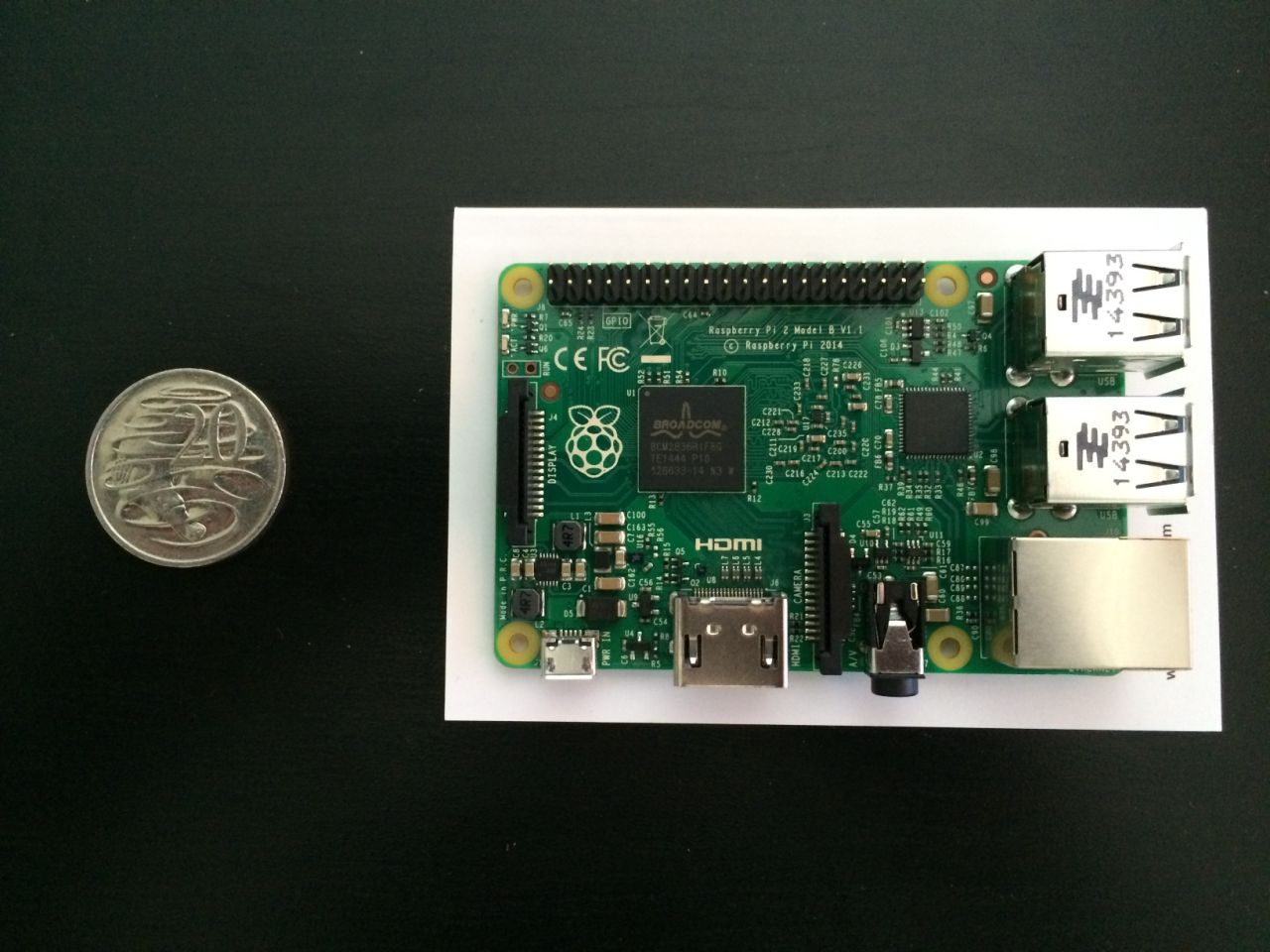 The underside of the board, showing the 8GB DDR2 Elpida RAM chip and the microSD slot on the far right. 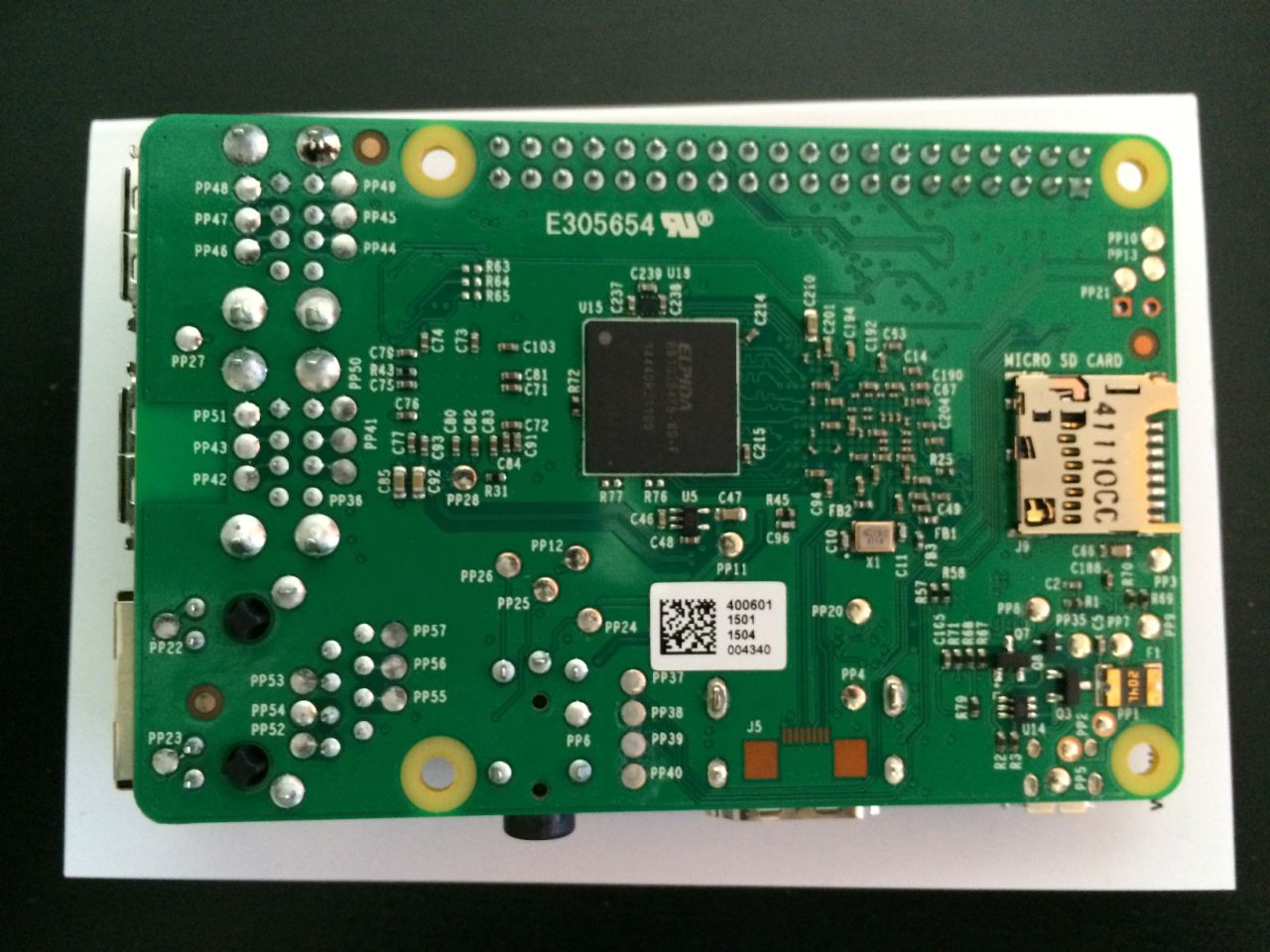 A closer shot of the top side of the board. 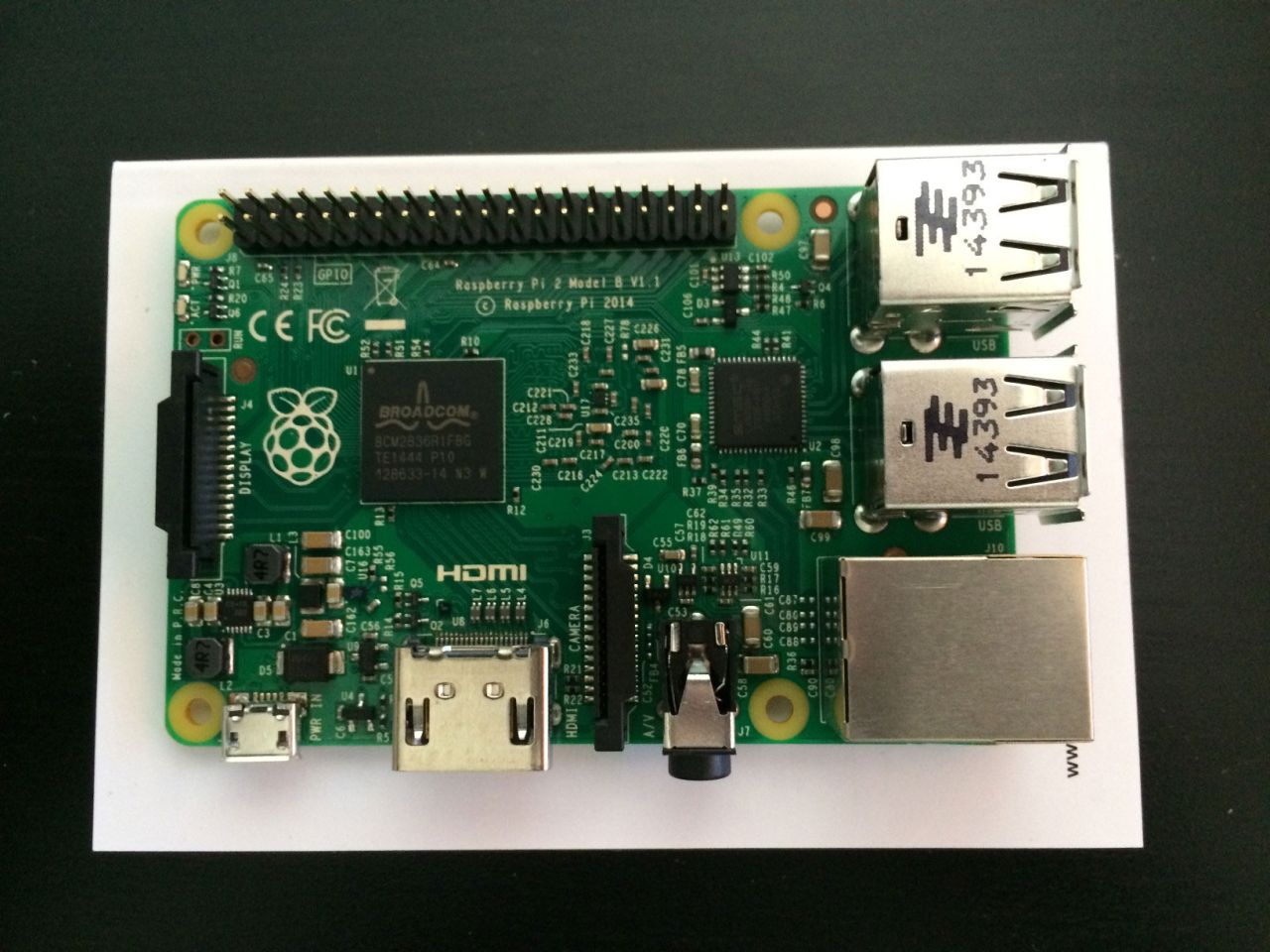 The Pi 2, sitting inside the enclosure. The lid and the 20-cent piece make an appearance. 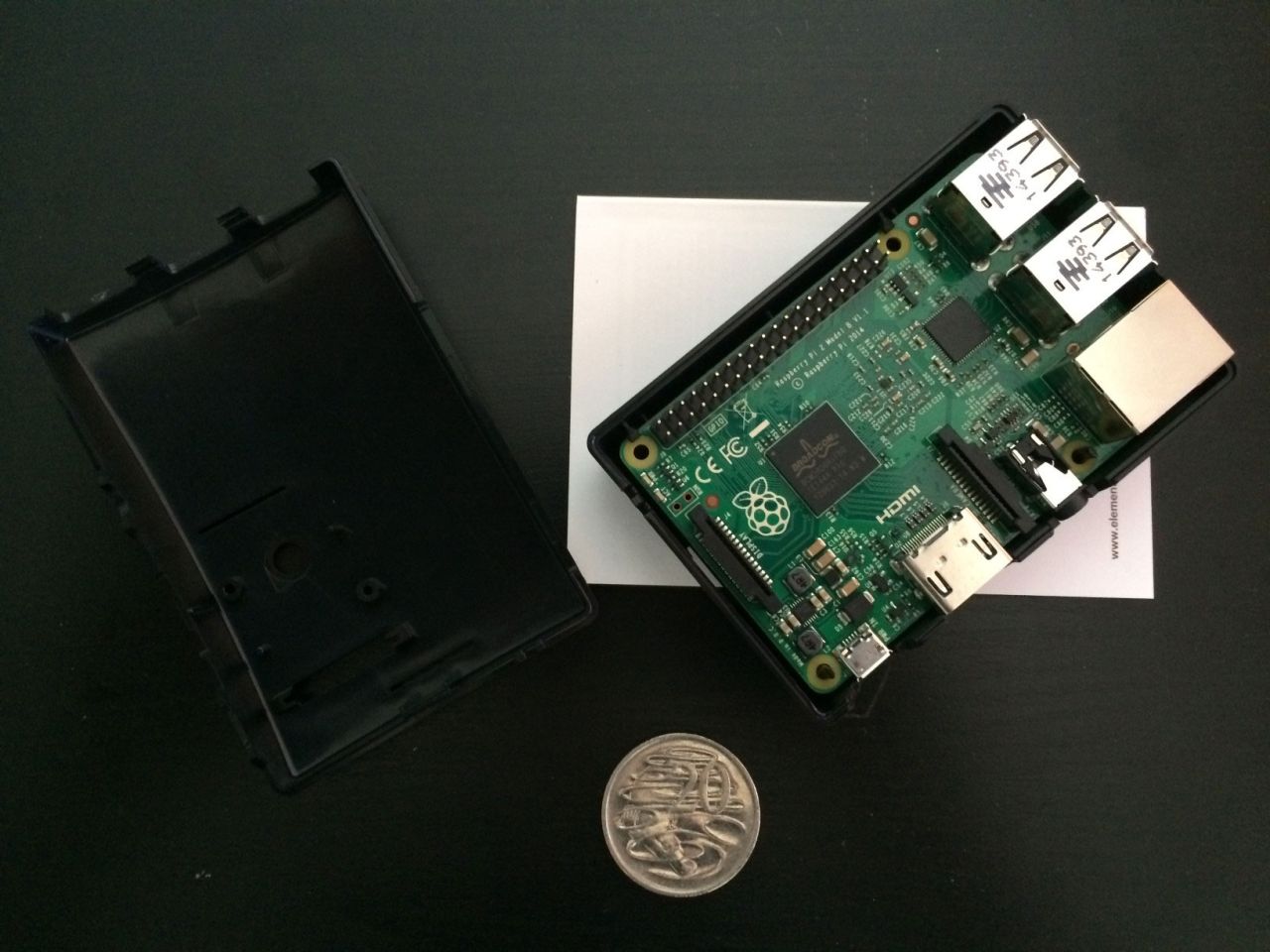 The WiFi dongle, again with coin for scale. 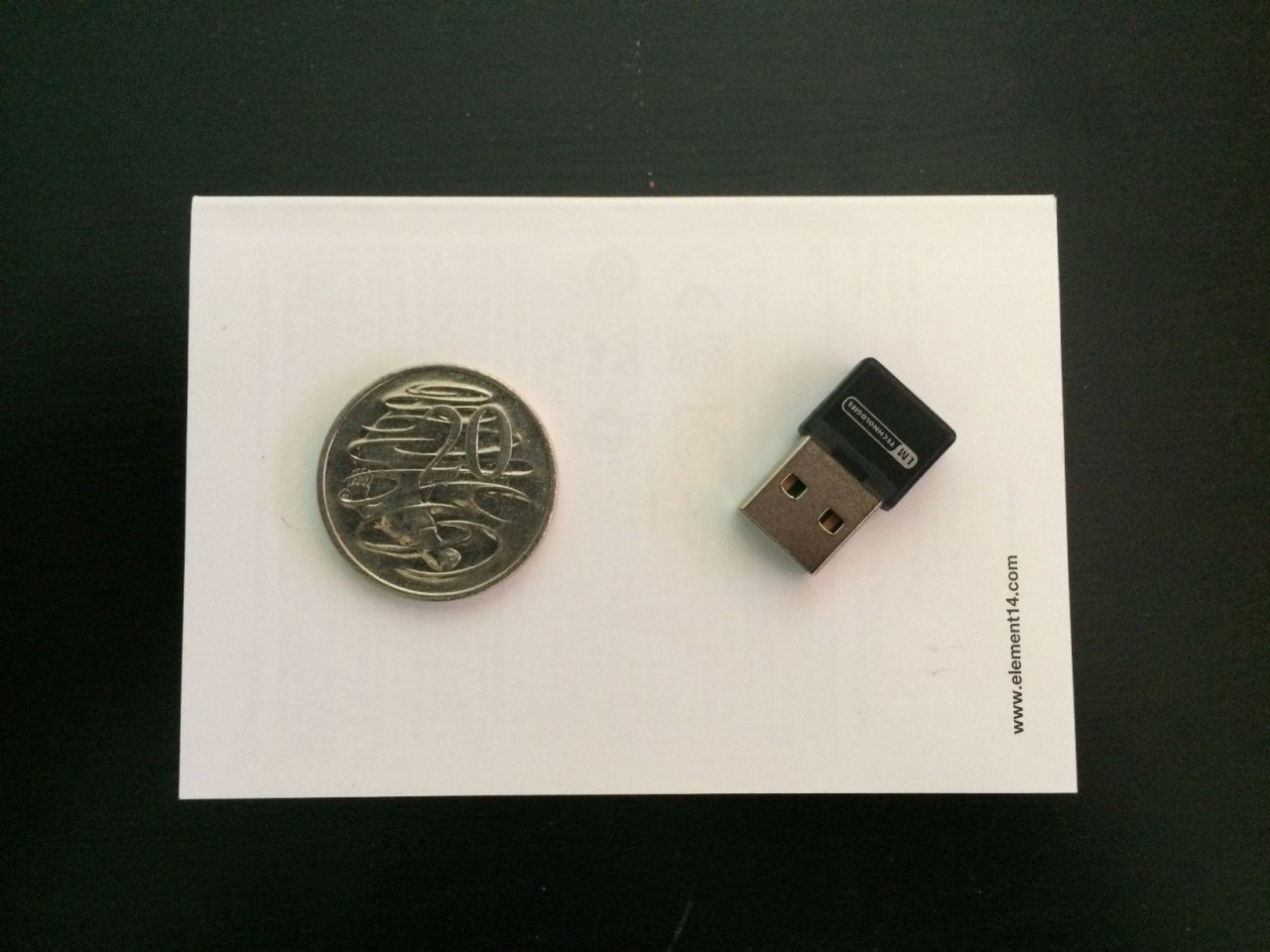 The enclosure comes with four plastic feet, adding grip and elevation, along with two screws if you need to attach the internal camera module. The case clips together decently, but is a little loose for my liking. In retrospect, I’d probably have spent a bit more on a better enclosure, but it doesn’t make much of a difference to the unit’s operation.

Here’s the final setup, sitting on top of my Netgear ReadyNAS 102 (apologises for the dustiness). The WiFi dongle is plugged into the back and not visible in this shot. The USB cable leads to a hub, to which a keyboard and mouse are connected. 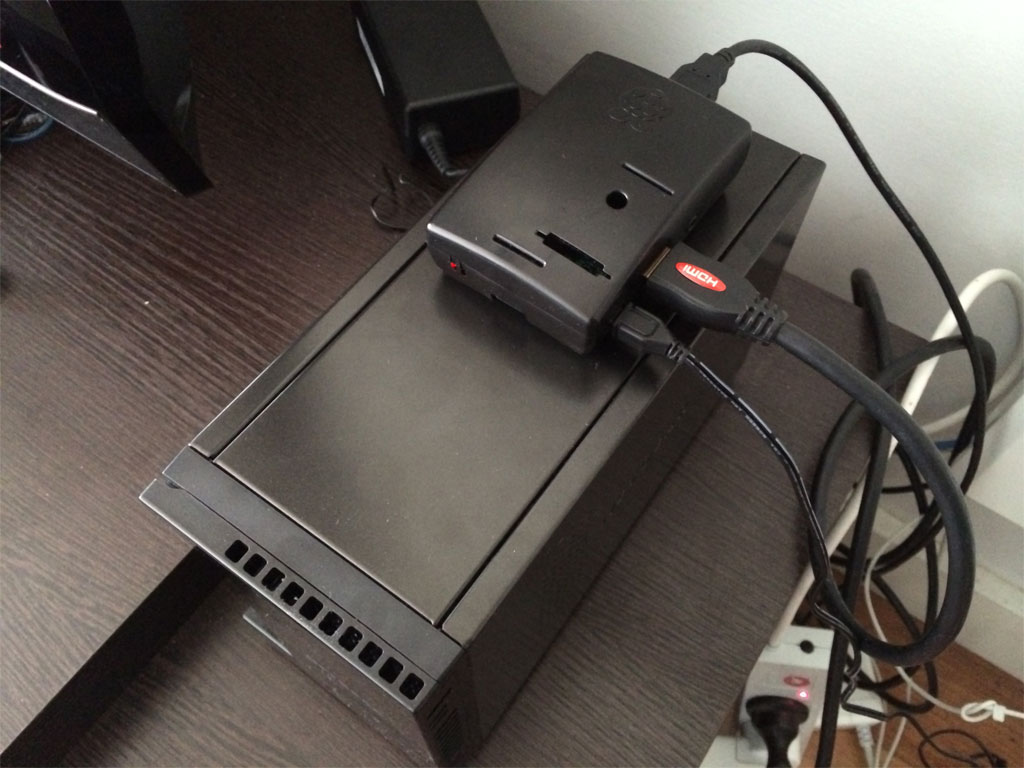 Setting Up The Software

This was by far the most time-consuming part of my Raspberry Pi 2 experience, made a little more difficult because the hardware is so new. Raspbian, the official Debian-based distribution for the Pi, is already up-to-date for the Pi 2, however, it’s a mixed bag for the other operating systems.

I’ll state upfront I have no prior experience with the following distributions — this is my first foray into the world of board computers. Consider my perspective that of someone with a high degree of technical knowledge, but only an average level of confidence with Linux. Enough to muddle through, but that’s about it.

Unless you plan on writing your own OS image to your microSD card, you’ll want to grab NOOBS from the Raspberry Pi website. It incredibly easy to use and lets you set up a multi-boot environment without getting your hands dirty. I’d recommended downloading disk images for other distributions directly from their respective websites, as the ones with NOOBS have not been updated for the Pi 2.

This is a dedicated distro for those who just want their Pi to act as a media centre and uses Kodi (formerly XBMC) as its frontend. Unfortunately, Raspbmc is in a strange position at the moment. It’s recently undergone a transformation to OSMC (Open Source Media Center) and is currently in its fourth alpha release. Rather than put myself in a potential upgrade quandary, I skipped Raspbmc and went straight to OSMC, for which there’s a Pi 2-ready build available.

I’m sad to say that while it works, it’s not a pleasurable experience. The OSMC custom skin for Kodi, while low on resources requirements and nice in its minimalism, was confusing to navigate and I ended up switching back to default Confluence. Once I’d imported my videos and music from my NAS, it also felt a little slower than OpenELEC. Support for wireless connections is yet to be implemented, though that’s easy enough to fix from the command line (credit to DBMandrake on the OSMC forums):

To check if wifi is enabled: connmanctl then technologies If wifi is off use: enable wifi then scan wifi then agent on then services This will list found networks, then use connect with the long string to the right of the network you’re trying to connect to — for example connect wifi_c83a35ca4314_535454657374_managed_psk Tip: you can use tab completion so you don’t have to type every character. Once connected the connection will be remembered and automatically used in the future.

In the end, I got frustrated dealing with OSMC’s alpha quirks and dropped it for OpenELEC. I’ll pop my head in occasionally to see how it’s improving, but for now it’s not ready for prime-time.

OpenELEC contains the absolute minimum software to get Kodi running and this streamlined approach is reflected in its snappy performance and simple setup. You can just write the disk image directly to the SD card, pop it in and have it ready for movies and TV shows in minutes.

I haven’t encountered any notable issues with OpenELEC during my few days playing with it, except for excessive mouse lag while a movie is playing. This also affected OSMC and despite turning off vertical sync and playing around with various playback options, I can’t get it to run delay-free. A search online turned up nothing, so hopefully a fix or workaround pops up in the future.

Dual-Booting On The Raspberry Pi 2

The disadvantage of using your Pi as a pure media centre is that you miss out on the benefits of it being an actual computer rather than a set-top box. I wanted to be able to browse the internet and do other miscellaneous tasks, which neither OSMC or OpenELEC are (intentionally) designed for. This meant setting up Raspbian and OpenELEC in a dual-boot configuration. I discovered that this is currently tricky to sort out on the Pi 2.

I’m confident the situation will be sorted out eventually, but for now, you’ll find that some of the optional distributions provided by NOOBS don’t boot up — at least, in my case, NOOBS warned me that OpenELEC was not compatible and while it installed fine, it failed to fire up when selected from the boot menu.

All is not lost however. If you decide to dual-boot Raspbian alongside OpenELEC, here’s how you can get it working. Note this requires some experience with disk images and partitions:

The following window should appear (note that this is an after-shot of the instructions below): 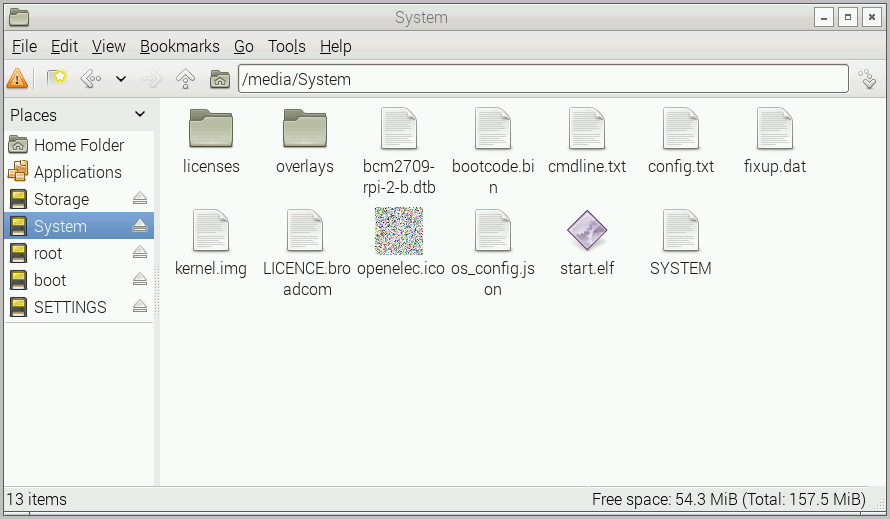 The “System” partition selected shows the files for incompatible OpenELEC version. What you need to do is overwrite them with the working files (sourced from wherever you placed them in step two). Do not copy over the cmdline.txt file.

If you get an error about insufficient disk space, first delete the SYSTEM file and try again.

That’s it. Reboot and select OpenELEC — it should load without any problems.

The Raspberry Pi 2 does offer overclocking options. Well, option. Below is a screenshot taken from raspi-config, the tweaking tool from Raspbian that alters the low-level settings of the device and operating system. Note these settings will only apply to Raspbian — you’ll have to manually edit the config.txt of other distributions. 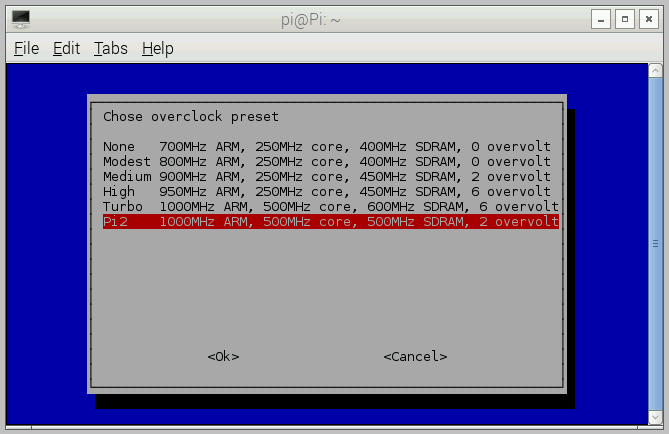 As you can see, all but the last choice are clearly designed for the last-gen Pis, while the bottom one offers boosted clocks for the CPU, RAM and GPU. I don’t have plans to try this — well, not until my heatsinks arrive.

This is by no means a comprehensive guide, but hopefully it points fellow Raspberry Pi 2 owners in the right direction. Things are still stabilising distribution-wise and a lot of software doesn’t take advantage of the additional cores or new architecture of the Pi 2’s Broadcom BCM2836 SoC. I’m looking forward to the next few months as the situation improves and developers get a better understanding of the hardware.