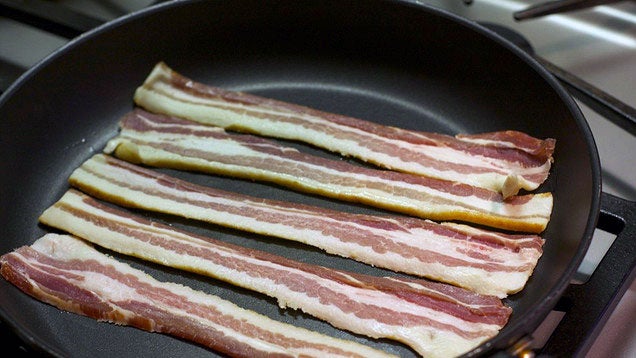 Crispy bacon is the best bacon. If you're making bacon on the stovetop, start with a cold skillet, preferably in a cast iron pan.

Epicurious explains the science behind this:

Trust us. When we tossed cold bacon into a hot skillet, it started to brown and crisp before the fat really started rendering out. That leaves you with two choices: Keep sizzling your bacon until the fat's cooked through but the bacon burns, or take it off the heat and deal with fatty, flabby bacon. On the other hand, when we added it to a cold pan and thenturned on the heat to medium, the fat had plenty of time to melt away, leaving us with crunchier (and less greasy) slices.

They go on to say that while a cast iron skillet produces the same taste and texture as a stainless steel skillet does, bacon cooks faster in the cast iron. Faster, crispy bacon is the best bacon.

You could also add a little water to the pan before frying, but that will delay your bacon fest.

How to Get Crispy Bacon in the Oven, Skillet and Yes, Even the Microwave [Epicurious]