How We Work 2015: Thorin Klosowski's Gear And Productivity Tips 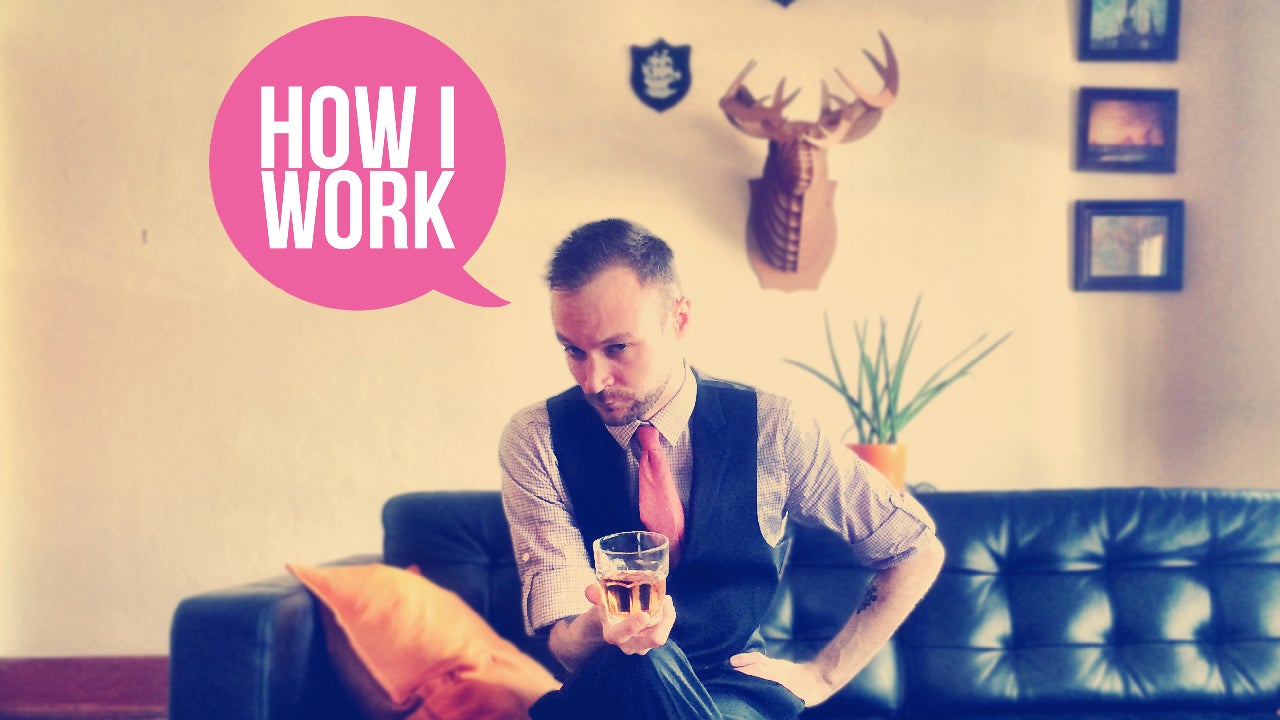 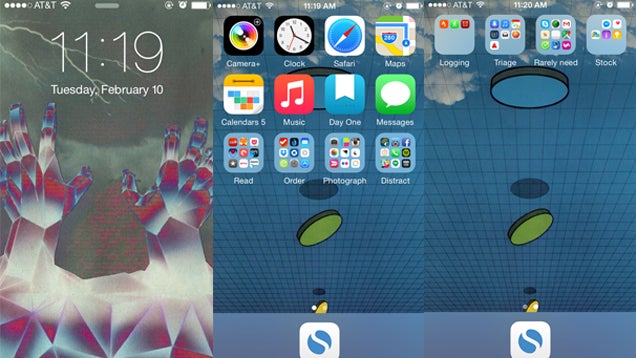 Late last year, I wrote a book (more on that in a couple of months), so Ulysses and Word were my go-tos. Otherwise, things are pretty much the same as last year and the year before. Which is to say, Simplenote, Google Docs, and — because Seattle is so Seattle-y — Dark Sky are my everyday apps. I'm a big fan of Instagram, mostly because it forces me to be on the lookout for weird things every day. Also, a Leatherman Wave, because everyone needs a good multi-tool. 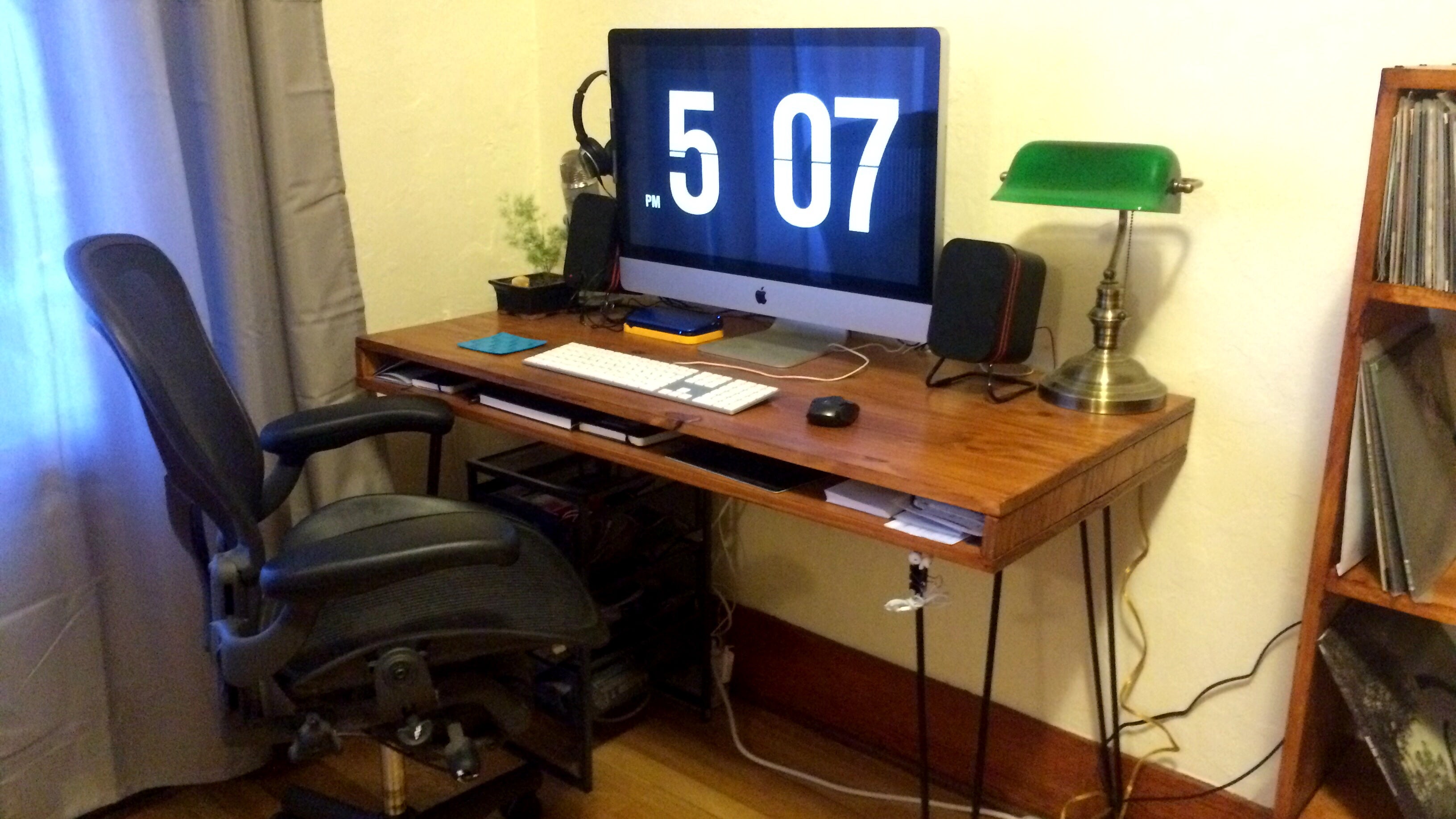 I keep things minimal and my desk is about as simple as I can make it. In this case, I mean that literally. I built this desk last year and the thing's still standing somehow, although there's a copy of Shakespeare's collected works bracing the iMac so my cheap wood doesn't crack in half.

On the desk itself is a pair of Audyssey Lower East Side Media Speakers, Audio Technica noise cancelling headphones, a Blue Yeti USB mic, 3DS, and my desk plant, Tetsuo. Behind the iMac is a TwelveSouth Backpack with my MacBook. Various notebooks, sketch pads, and cutting boards sit inside the desk. The chair's a Herman Miller Aeron.

I sleep in the shower so I don't have to get out of bed in the morning. No wait, that would be absurd, although that would save me some time. Really, I just strive for simplicity with everything. I outsource everything I can, I stick to the same basic tools, and I rarely upgrade my gadgets. Maybe most importantly though, I let myself get bored and distracted. I used to pack my days with too much stuff so I'd never be bored, and that just wasn't good for my brain. Boredom gives me the time to come up with new post ideas and other creative things, so I'll often force myself out on walks without headphones to try and keep up that creative insight.

Pretty much just Simplenote and my brain at this point. Although, I'll use Calendars 5 on iOS and Fantastical on Mac to keep track of anything with hard due dates. 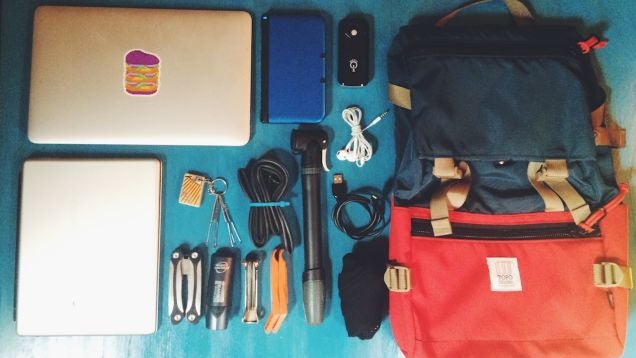 Probably most importantly, my Kindle. Also my Roland SH-201, because otherwise I'd be stuck making music on *shudder* a laptop. I'm a big fan of the Logitech UE Boom Mini Bluetooth speaker because it makes cooking in the kitchen/parties on boats all the more enjoyable.

My backpack and cycling gear probably fall into this category too. Is coffee a gadget? I hate to get all Cathy on y'all, but I can't live without that either. I break the cardinal rule of a Lifehacker coffee lovers and use a Bonavita drip coffee maker. Why? Because while I love AeroPress, I'm not going to make every single cup of coffee every single morning that way.

Asking questions to make it seem like I am interested (which I usually am), already knowledgeable (which I often am not), and nice (which is debatable). At some point I realised the easiest way to make people like you is to ask questions and that's been my general rule for small talk ever since. 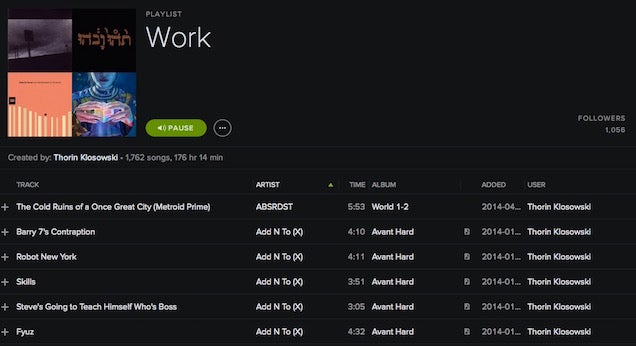 For better or worse, I've been listening to the same Spotify playlist for the last like, three years. I made this Spotify mix of mostly instrumental music in a variety of genres and add to it sporadically. If I'm not writing, I've been on a nostalgic trip through various (and often terrible) music of my youth.

Right now, Bone Clocks by David Mitchell. I also just got The Sculptor by Scott McCloud, but haven't dug into it yet, though Understanding Comics is one of my favourite books of all time (and useful for anyone creating anything, not just comics).

What has changed over the years since you started and what do you do differently?

Well, our staff has ballooned since I first started, and a lot has changed, and doing things differently tends to mean thinking even more outside the box than usual. In the three years since I started, we've all become a lot more comfortable with technology, and while it sometimes feels like we've reached an inspirational peak, it also seems like there are big changes brewing. Whether that's the goofily named Internet of Things, wearables, or whatever else, I'm curious to see where it all goes, what's next, and how to make the most of it. As far as doing things differently, I suppose that really just mean looking at different kinds of trends and paying attention to a wider variety of news.

I never know how to properly answer this question. On one end of the spectrum, I definitely get worn out when I spend too much time with people, but overall, I'd rather be hanging out with friends than sitting alone in my apartment. My general rule these days is to say "yes" to any plan unless it's conflicting with something else. I also love talking to strangers about basically anything, and it seems like the older I get the more I enjoy doing just that.

In bed anywhere between 11pm and 1am, up at 7:30am regardless. Sometimes on the weekend my brain jostles me awake at 5am, which is exactly as horrible as it sounds.

Right Shark. Whoever that was clearly knew what they were doing and they're being outshined by a slacker.

After a bit of a rough spot late last year, a friend accidentally spawned an existential crisis when she told me "you're not who you were." The general gist of what she was saying was pretty simple: a lot of the expectations I had for myself were based on who I used to be, not who I am. More often than not, those expectations were completely wrong. It was a nice wake up call.