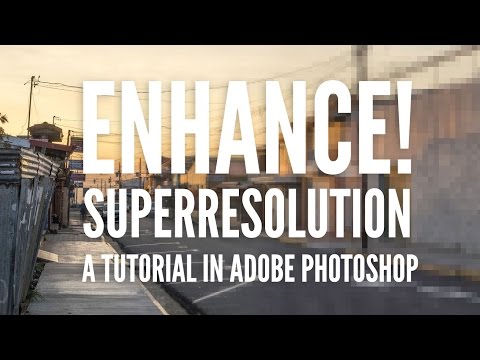 such a device now exists at the consumer level

Ian Norman of The Photon Collective has created this excellent video guide to making your own “super-resolution” photos. In the clip, Norman boosts a 24MP image to 90MP, using a technique that involves taking multiple photos of the same scene, offsetting them slightly and compositing them into a single “mega” image.

If this sounds familiar, it’s because some cameras can do this automatically, such as the Hasselblad H4D-200MS Norman mentions in the text version of the tutorial.

To create his super-resolution photo, Norman took 20 consecutive photos — without a tripod. He explains that the movement of your hand is enough to replicate the sensor-shifting technology found in the H4D-200MS. Not as accurate of course, but good enough. Then, it’s a trip to Photoshop:

We’ll use a simple averaging (mean) filter, which will allow us to resolve detail at up to 1/4 of our original pixel size. So when we upsample, we increase the image to 4 times its original size. A 12 MP image can become nearly 48 MP, a 24 MP image almost 96 MP. There’s always a little cropping necessary because our photos will never perfectly overlap.

It’s a little bit of work, but if you need the detail without blowing your wallet on a new camera, it’s a clever approach. You can read more about the process over at Norman’s website, or just watch the video here.

Enhance! A Practical Superresolution Tutorial in Adobe Photoshop [The Photon Collective, via Petapixel]