Career Spotlight: What I Do As A LEGO Model Designer 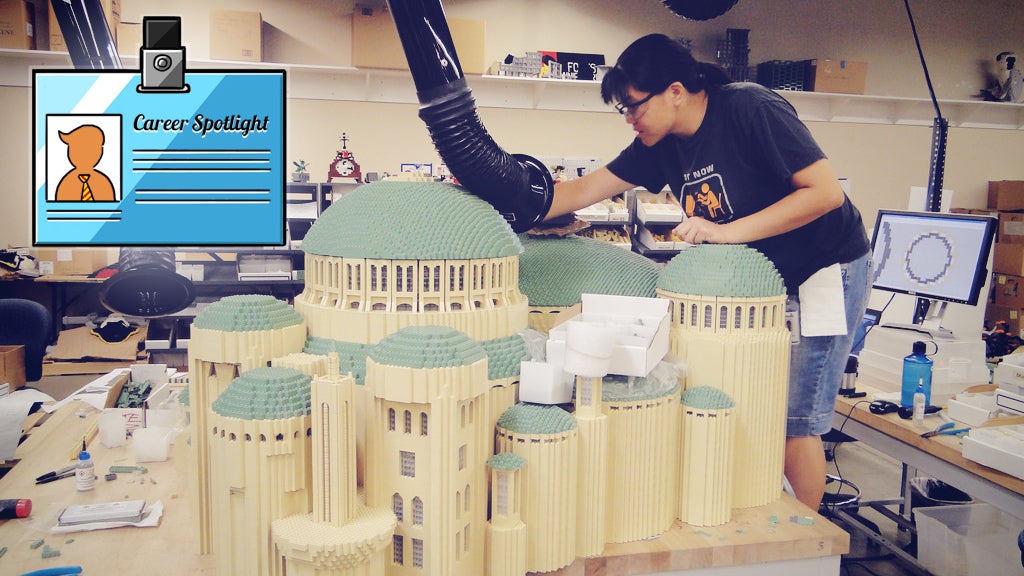 How would you like to play with LEGO all day? To children and adults alike, a pile of LEGO offers infinite possibilities — whole worlds and inhabitants in that familiar tableau of right-angles and vibrant mismatched colours. And then some people take their LEGO a little more seriously.

When scaled up, the bricks allow for exquisite and complex constructions, becoming exact pixels in large structures. It's a huge undertaking to construct those large-scale models that you see in places like LEGOLAND. What's it like to actually spend your days knee-deep in LEGO? We spoke with Adora Lo about her work as a LEGO model designer and how she ended up working in the medium of plastic bricks.

Tell us a little about yourself and your experience.

My name is Adora, and I'm a Model Designer and Team Lead at Merlin Studios Carlsbad, based out of LEGOLAND California Resort. I design new architectural and sculptural models for LEGOLAND and LEGOLAND Discovery Center attractions worldwide. I also manage a team of nine model builders, taking care of any issues they may have. I've been working here for almost five years, although I only became a designer and team lead in the last year and a half. I was a Model Builder before that. 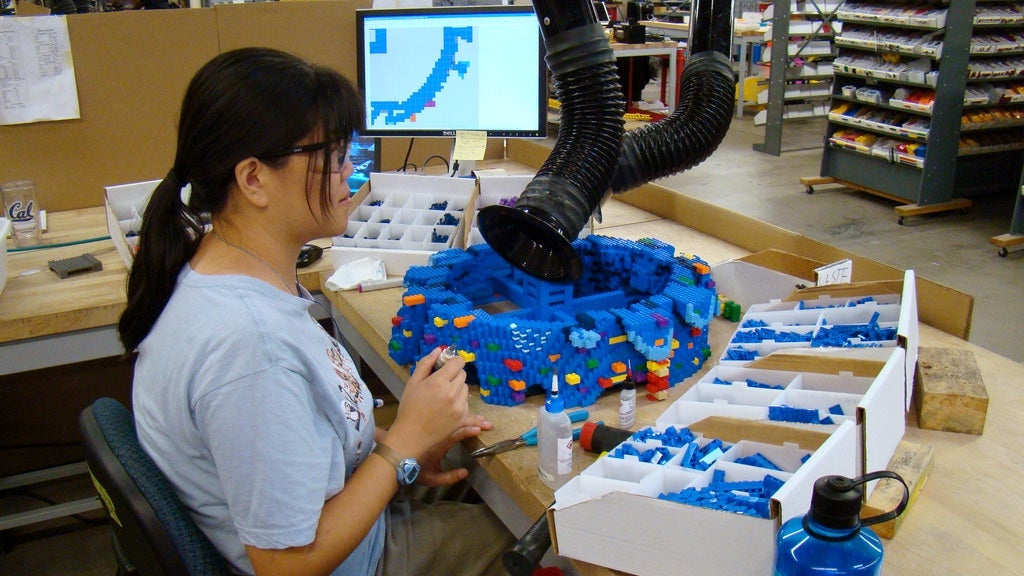 My graduation coincided with a harsh job market in 2009, so I worked part-time jobs while looking for full-time architectural work. While searching for architectural jobs, I found a posting for a LEGO model builder and decided to give it a shot. I didn't make it in the first round, but I got an email a while later asking me to interview again. I got the position after that. I thought I would only be a model builder for a year or two and go back to architecture, but after the first year, I enjoyed it so much that I decided to stay.

What kind of education and experience did you need?

In our model shop, there are people from all different backgrounds. There are people straight out of high school and people with graphic arts or public policy degrees. I have a Masters of Architecture from UCLA, and a BA in Architecture from UC Berkeley, so the architectural training I received gave me a strong structural building background and a step up in learning all the software that I needed to know for this job. It was also good that I love solving problems, and I can handle stress pretty well. My previous job was as an after-school teacher, dealing with 20 fifth graders everyday who didn't want to be there.

What kinds of things do you do beyond what people see? What do you actually spend the majority of your time doing? 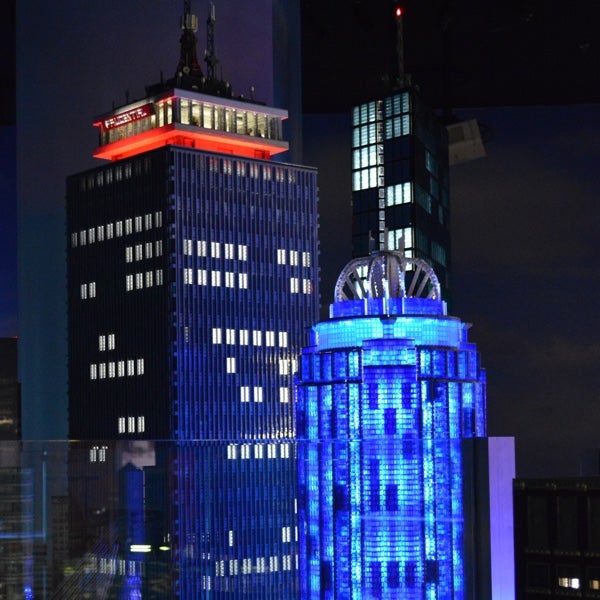 What most people see are the finished models in one of the LEGOLAND parks. Our model shop is offsite and the public never gets to see what goes on inside, mostly because we're working on models for parks and attractions months or years in advance. I spend a lot of time on the computer, using LEGO's proprietary software and Rhino3D to create scaled-down buildings or sculptural models. I also build prototypes to figure out how a model will come together, since there are construction techniques that are easier to visualise and test by physically building a model. I'm also a Team Lead, so I hand out projects to my builders, quality check their work, and facilitate other administrative needs. I think something that the public will never see is me or my co-team lead trying to break LEGO models to test them for durability.

I think a lot of people think I just play with LEGO all day, when in fact it's a lot of maths and puzzles. One of the first things we memorise is the size of a 1x1 LEGO plate (8mm x 8mm x 3.2mm). If you consider that turning five plates onto their side is equal to two studs in width, and then do that over the course of a 100 stud building with various patterns mixed in, the maths starts to get a little intense. Also people tend to think I work for The LEGO Group, which I do not. I work for Merlin Entertainments, which is a British-based attractions company that owns the LEGOLAND resorts around the world, along with Madam Tussauds and The Dungeons, amongst other attractions.

What are your average work hours?

I average 40 hours a week, although I usually work nine hours a day for nine weekdays, then take the 10th day off.

What personal tips and shortcuts have made your job easier?

I schedule similar tasks to perform at the same time. If I have to quality check some models, I do them all at once at the beginning of the week. If someone finishes their model the next day, I hold off until the following week so a few more can also be completed. I also take some time during the morning to walk around to all of my builders to see how they're doing, if they need anything, or if there are any quick questions I can answer there and then. It helps me because then I know I can work relatively unbothered for a couple of hours once I've checked in with all of them. 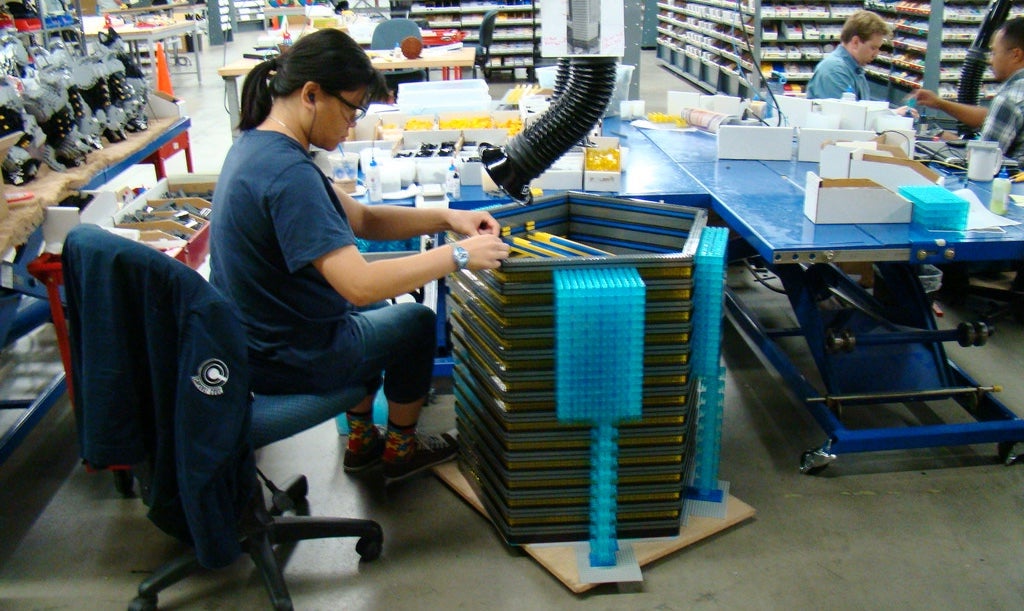 What do you do differently from your coworkers or peers in the same profession? What do they do instead?

There are two team leads at the shop, and we work in opposite but complementary ways. My supervisor jokes that we're yin and yang. I'm more organised and like to plan things in advance; my co-team lead works better with chaos and is better at solving problems on the fly. I'm better at computer-related issues, while he's better with anything involving power tools. While we can both do the things we need to, we both know we're better than the other on certain tasks. As for designing, because I'm architecturally trained, I tend to use Rhino3D more than the others, who usually use LEGO Digital Designer or LEGO's proprietary software. Also, I'm always using massing models to start my building and working in the details according to that scale, rather than starting from a few small details on a building and working out the rest of the model from that. 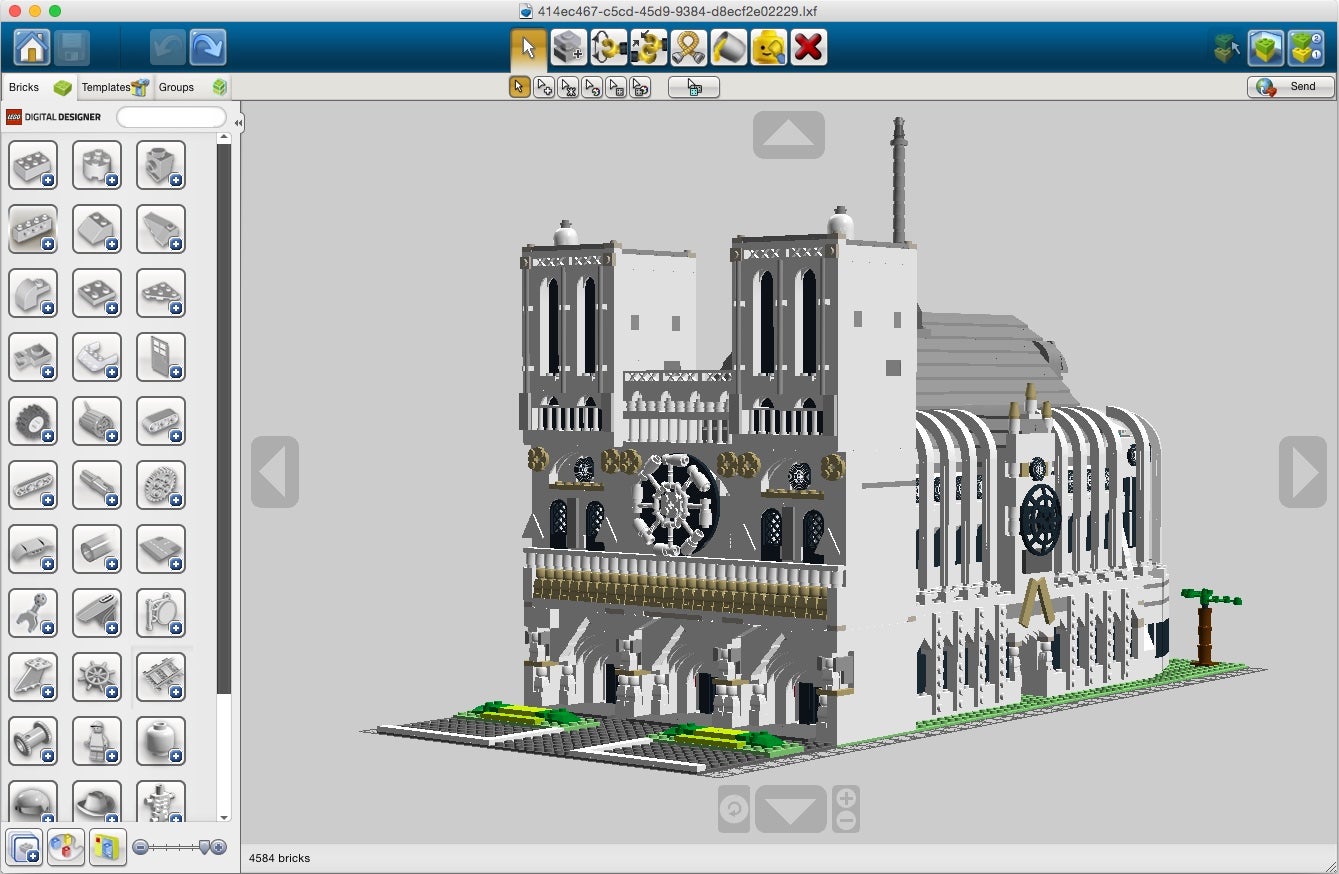 An example of a fan-made model on LEGO's freely available Digital Designer. 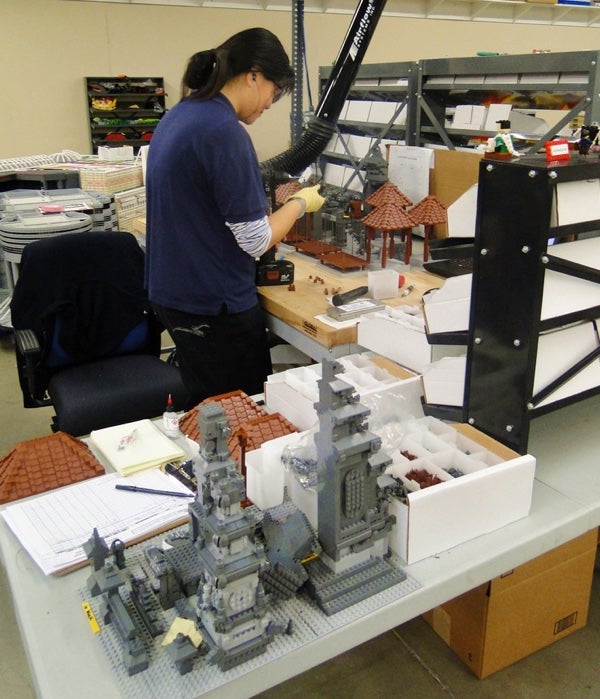 The worst part is when something during the building of a model goes off the plan, like when a steel frame doesn't match up, or when the original structural design looks great on the computer but doesn't work in the physical world. Usually I just brainstorm with my co-workers to solve the problem as efficiently as possible, while still maintaining a high level of aesthetic quality. The absolute worst thing that's happened to me is that one of my models fell off the transport truck. The manager brought the pieces back to the shop and I repaired it in a week. I was pretty annoyed the first day, but I got over it and just focused on repairs. I had built it pretty solidly though, and most of it survived the fall intact. I just had to repair some cosmetic damage and fit the walls back together, and it was as good as new. Fortunately, it's only happened once in the history of the model shop. Too bad it was me!

I'm surrounded by LEGO all day! I grew up playing with LEGO and that led me to architecture, which in turn, led me back to LEGO. The fact that I get to make international landmarks out of plastic toy bricks, and get paid for it, is still amazing to me. Also it's the people I work with that make the job one of the best I've ever had. They're brilliant, fun, and easy to work with. We have a really strong camaraderie and everyone really cares about each other. Some of us play eight player Smash Bros during our lunch breaks and others go out drinking together at the end of the week. For being such a large model shop (30+ people), we all get along pretty well. ­ 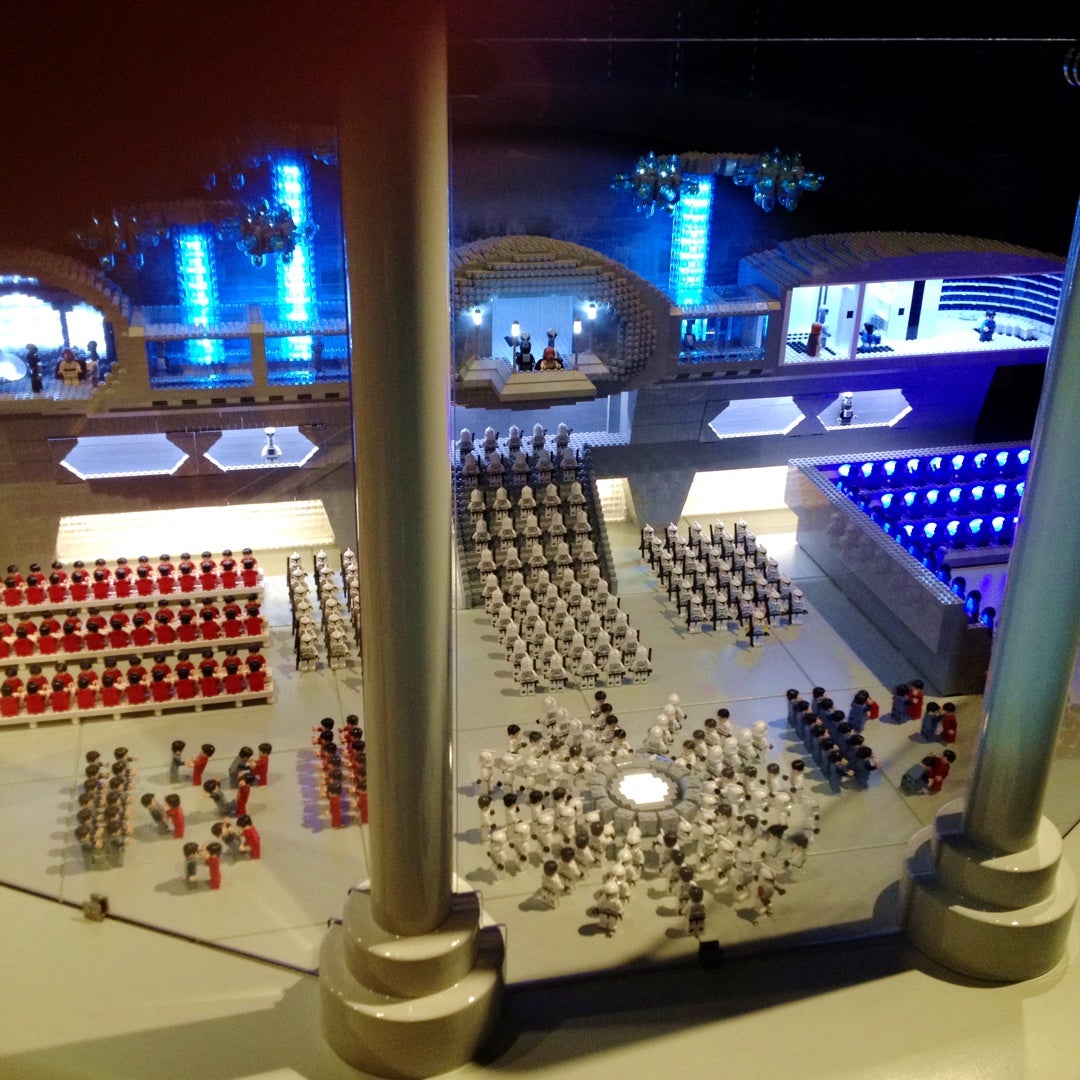 Pictured: A scene from Star Wars: Episode II on the planet Kamino.

How do you move up in your field?

I started as a model builder, and as I learned about the different types of models that our shop produced, I started to talk to the designers to see how they created their schematics, and then started to request small design projects of my own. I eventually had a small portfolio of work projects that I could show to the managers and prove my potential to become a designer.

Have a portfolio, something that shows off your creative skills. It doesn't have to be LEGO; mine certainly wasn't. And definitely practise building things with LEGO and learn the system. Knowing the difference between plate and brick, and that three plates equals a brick is very useful. Our interview is more like a skill assessment than a traditional interview, so we look at a person's use of the bricks through some building tests, along with their resumé. Also, if you don't succeed at first, try again the next time around. I didn't get hired my first time, but the second time was a charm for me, and many of my coworkers were also hired on their second try.