Over the past few days, you may have seen the above monstrosity pop up on your social media feed. It’s known as the KFC Double Down Dog: a cheese-smothered hot dog stuffed inside a deep-fried chicken patty. Like moths to a flame, we were irresistibly drawn to this greasy portent of mankind’s destruction: it was something we just had to try ourselves. Unfortunately, it’s currently only available in the Philippines. Time for a little DIY innovation, methinks…

Here at Lifehacker, we’re no strangers to bespoke gastronomical nightmares: from the Colonel’s McWhopper to the Noah’s Ark Burger and (bleurgh) Bacon-Flavoured Sundae, we’ve lashed together more monstrosities than the combined filmography of Boris Karloff and Bela Lugosi. But of all the DIY foodstuffs we’ve assembled over the years, the KFC Double Down Dog is arguably our finest creation.

The official Double Down Dog consists of a bun-shaped chicken patty, a hot dog sausage, cheese and mustard relish. In other words, we needed to procure three non-KFC fillings to make our own version: a pleasantly achievable challenge.

For the “hero” ingredient, I went with Hans American Hot Dogs, which are available at most supermarkets in packs of eight. For the mustard, I opted for American Stockyard’s Four Pepper Hot Dog Relish — this is undoubtedly spicier and fancier than KFC’s version, but I’m a man of refined tastes.

For a dash of gruesome authenticity, I originally wanted to use the synthetic “squeeze-on” cheese favoured by American hot dog stands. Unfortunately, I couldn’t find the stuff anywhere. Even a trip to a specialty US food store left me empty-handed. (Apparently, Australian food laws are pretty strict when it comes to weird dairy imports.) After a fruitless search, I eventually settled on a combination of grated mozzarella and ricotta. 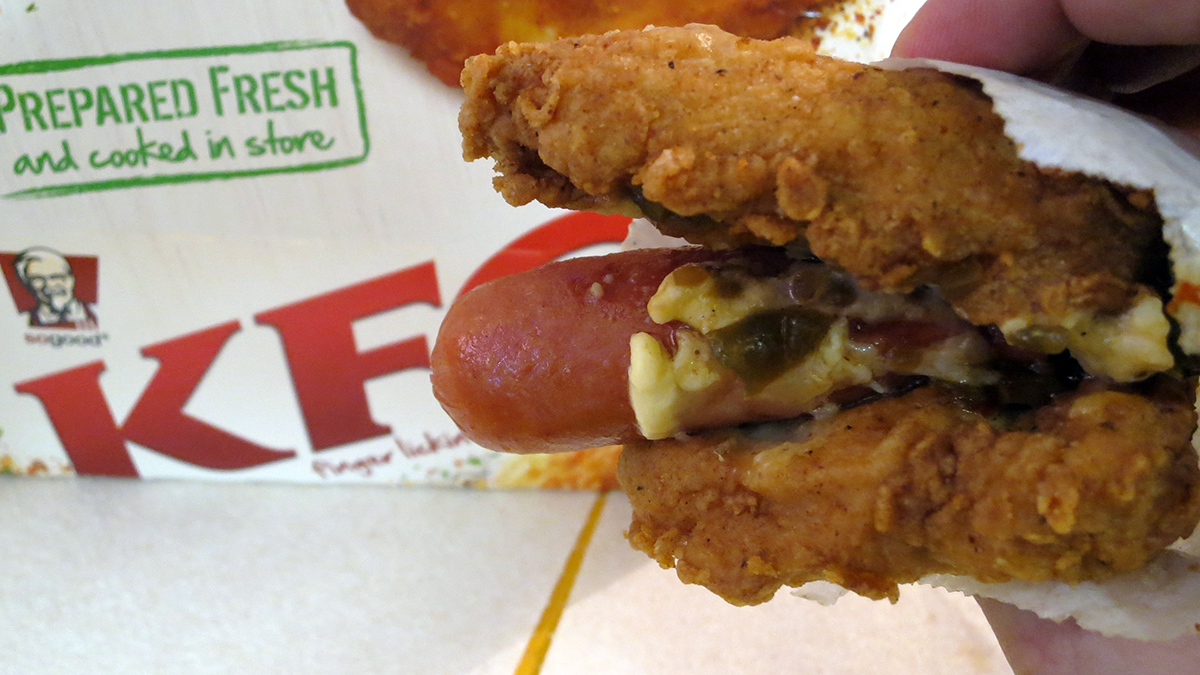 Now that I had all the necessary fillings, it was time to head to KFC to purchase the “buns”. Now, the sensible way to do this would be to purchase the chicken and make the Double Down Dog in the privacy of my own home. But DIY Taste Tests aren’t supposed to be sensible. Instead, I microwaved the hot dog, wrapped it in glad wrap and smuggled it into the store along with the other condiments. (No guts no glory, right?)

As I sheepishly sidled up to the counter, the cashier seemed to sense the hot, floppy secret stashed inside my pocket. Or maybe she just smelled it. Undeterred, I bought a pair of breast fillets and headed to the most distant and isolated table I could find. What followed was a careful ritual of lukewarm sausage stuffing. 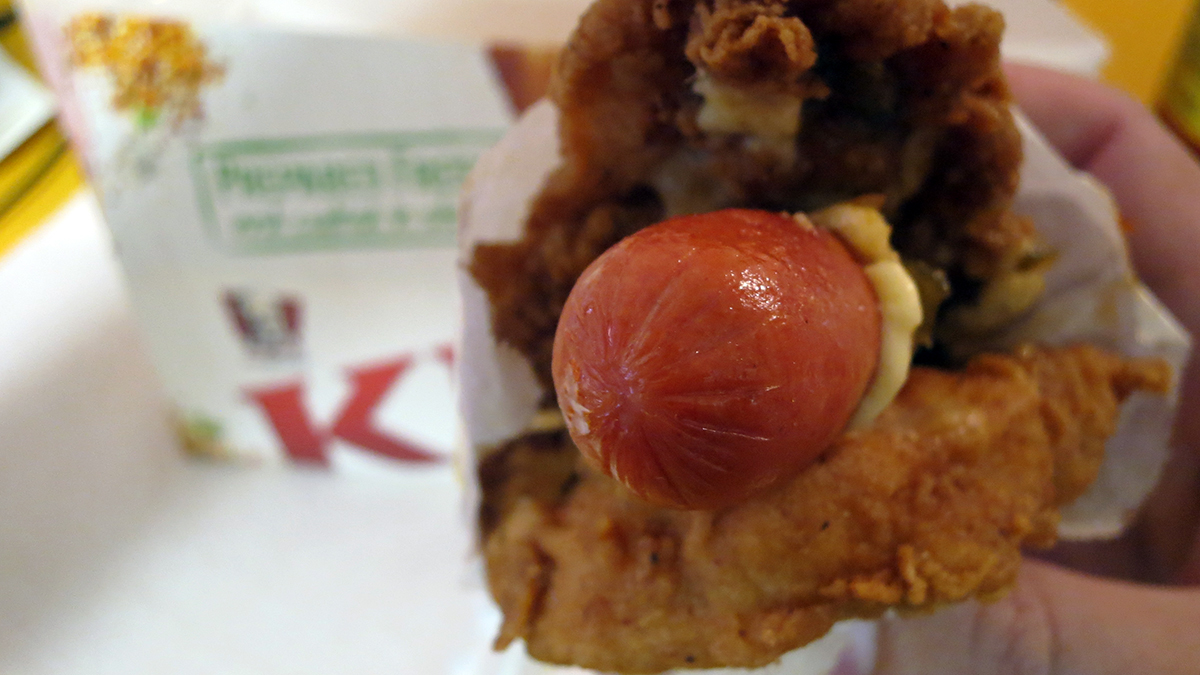 Unlike the official product, my chicken buns didn’t come with a purpose-built crevice: instead, I slapped two patties together with the dog, cheese and relish sandwiched in the middle. The sausage also proved to be too long: for a snugger fit, I tore it in half. The end result looked like a weird hybrid between a hot dog and a burger. When you consider the limited tools at my disposal, I think I did a pretty bang-up job.

As you’d expect, the KFC Double Down Dog makes for a rather messy feed: the relish dripped all over the shop and I had to keep wiping grated cheese off my lap. If you’re contemplating making one of your own, be sure to apply your toppings frugally.

In terms of calorie damage, the KFC Double Down Dog actually isn’t the worst fast food item you could eat: by my calculations, the meal worked out to around 2000 kilojoules. That’s roughly the same as a Big Mac. 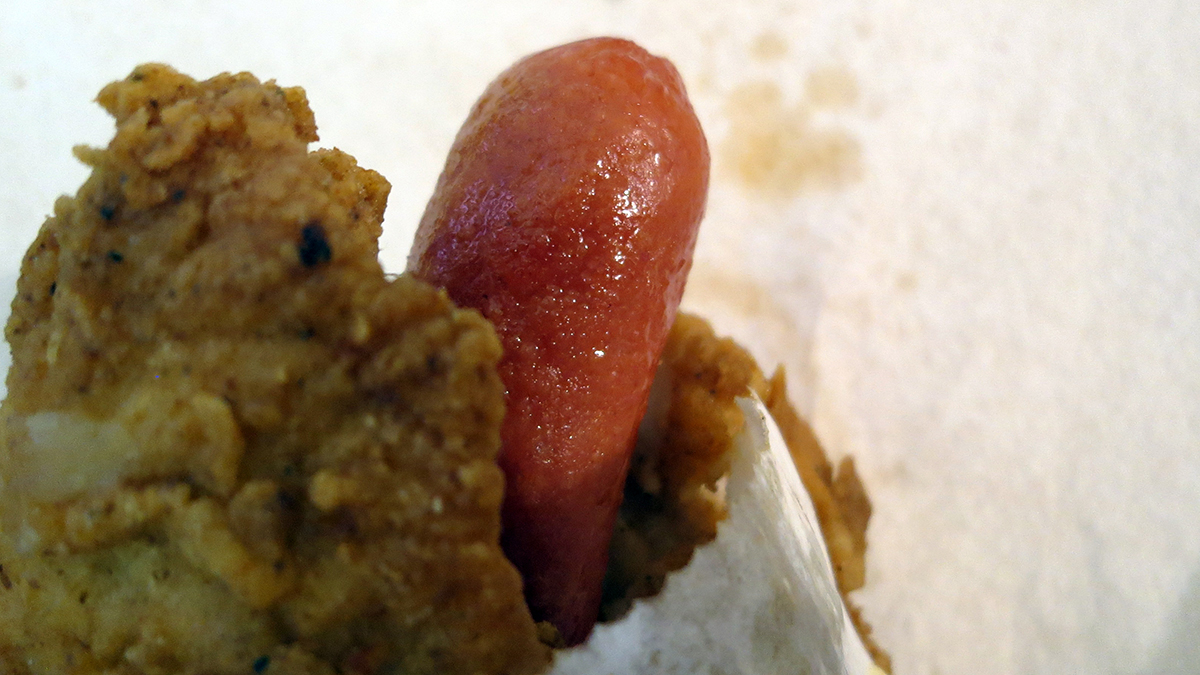 So how did it taste? If this was on KFC’s Australian menu, I’d happily order it again. No, really. The Hans hot dog had a slightly sweet aftertaste that helped to balance out the saltiness of the chicken. The relish and cheese, meanwhile, added a moreish lip-smacking flavour.

On the downside, it’s not the easiest meal to wrap your mouth around and it suffers from the same design flaw as KFC’s other Double burgers — namely, the chicken “buns” burn the crap out of your fingers. I also experienced slight chest pains and weird stomach cramps which lasted about an hour. (To be fair, my constitution was already weakened due to a recent tummy bug.) 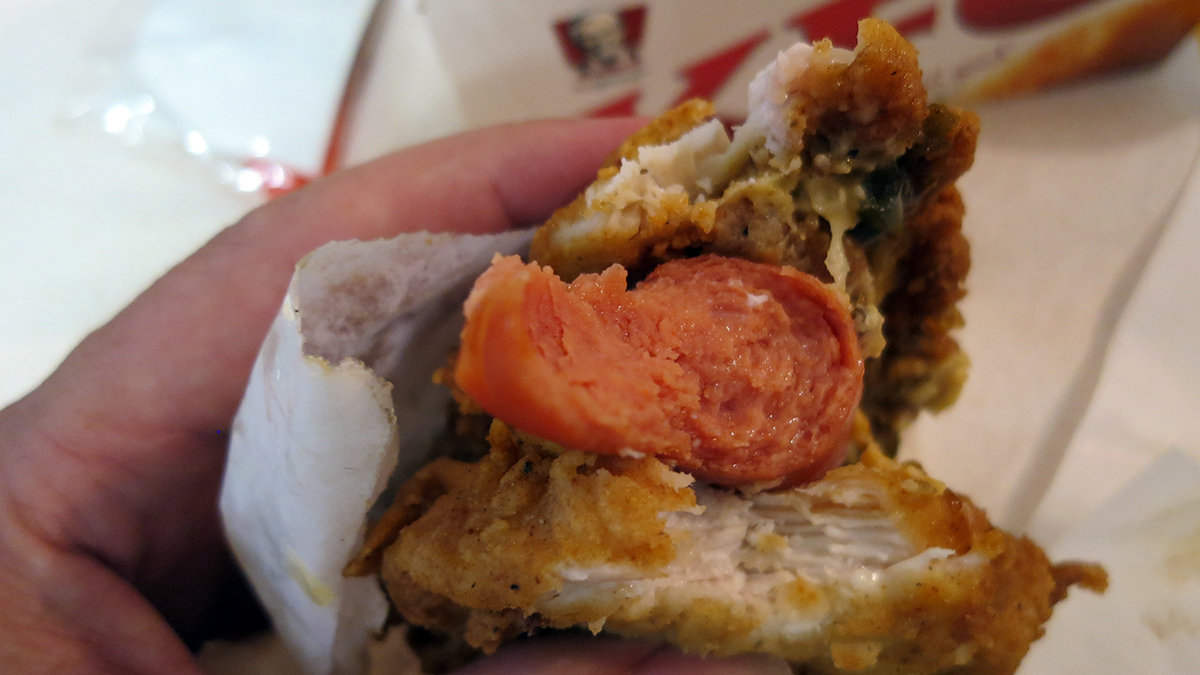 All in all, the KFC Double Down Dog was nowhere near as disgusting as I was fearing — and I don’t even like hot dogs. If you’re planning to replicate our DIY experiment, the key is to use high quality relish. (In the interest of science, let me know if you get chest pains in the comments section below!)