With every iteration of iOS, Apple tweaks its software a little. For the most part, however, the default lineup of apps has remained unchanged since launch. For a lot of us, these apps just aren’t cutting it anymore. Here are the best apps to replace them.

The design and function of many of Apple’s apps is beginning to feel a bit stale, and many people are growing dissatisfied with the experience as a whole. On top of that, many of the apps lock you into Apple’s data ecosystem and iCloud. However, plenty of superior replacements exist for Apple’s stock apps. From Maps to Mail, here are some better options.

Google Maps Instead Of Maps 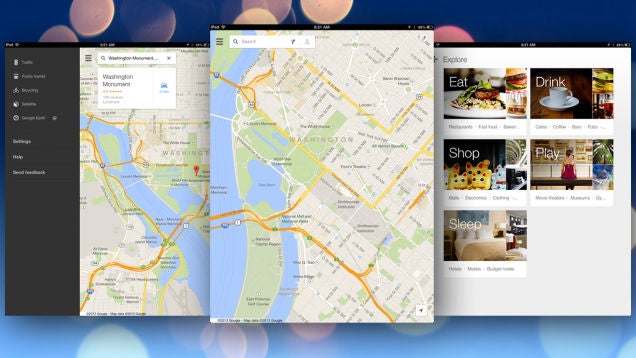 While Apple Maps certainly isn’t as bad as it was at launch, it’s still not as good as Google Maps (free). Put simply, Google Maps has more data, more up-to-date directions, better live traffic conditions and an abundance of info about anything you search for. You also get biking and public transport directions in the app, which Apple Maps hasn’t bothered with at all.

Chrome Instead Of Safari 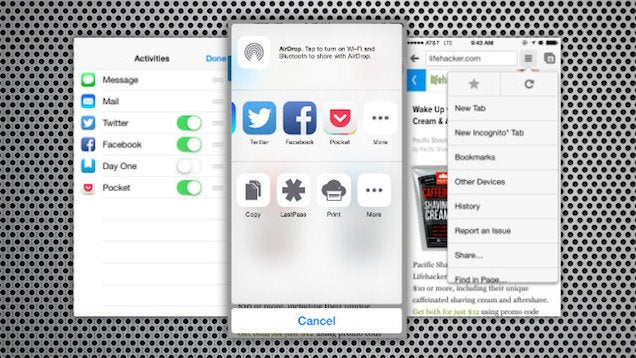 The most recent update to Safari for iOS is actually good, but you miss out on syncing your browsing data if you don’t use Safari on desktop. So, if you’re a Chrome user on desktop, Chrome for iOS is the logical choice. And there are other benefits besides just syncing: Chrome can reduce mobile data usage automatically, show search results immediately and lets you keep as many tabs open as you want.

Camera+ Instead Of Camera 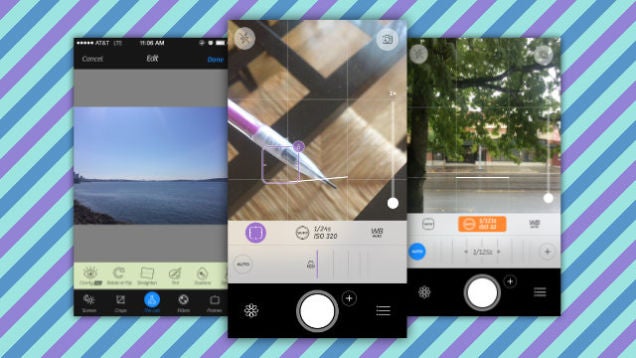 Apple has done a lot of work to make the default Camera app more powerful, but it’s still lacking the fine-tuned controls of Camera+ ($3.79). Camera+ adds all kinds of handy photography features, including better exposure and focus lock, a useful horizon level, a fantastic Clarity filter and a number of scene shooting modes. It’s all tied together in an app that has everything you need to shoot great photos.

Sunrise Instead Of Calendar 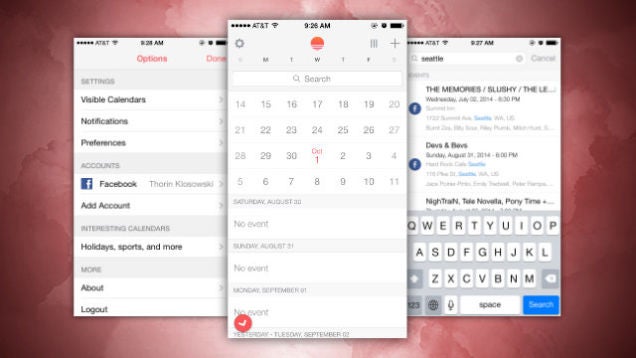 Sunrise Calendar (free) is basically what Apple’s Calendar should be. It works with Google Calendar, iCloud and Exchange. You can quickly add events with real language. It integrates Facebook events and birthdays. It even uses Google Maps for directions and adds weather forecasts for events. It’s also a little easier to use than Apple’s option, which makes it a better calendar for just about everyone out there. We think Fantastical is best on Mac, but Sunrise fits in more with what we tend to do on mobile.

Dispatch Instead Of Mail 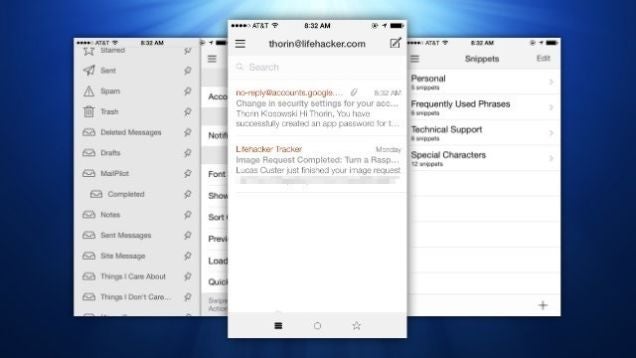 If you’re looking for a powerful email app, Dispatch ($6.49) is easily your best option. Apple Mail gets things done for most people, so stick to that if you’re just sending a couple of emails here and there. If you actually need to do some serious emailing on your phone, Dispatch is where it’s at. You can respond to emails incredibly quickly with text expansion snippets, clean up your inbox with a couple swipes, and search through your messages with an insanely powerful engine. You can also customise which apps Dispatch communicates with to add events to your calendar, to-dos or archive important emails.

Kindle Instead Of iBooks 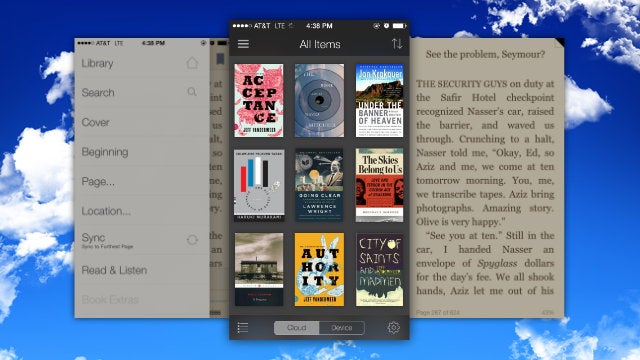 Unless you plan on sticking with Apple for the rest of your life, buying books with iBooks is a bad idea because that software will only be available for iOS and OS X. Instead, you’re better off going with the Kindle app (free). Sure, your books are still packed with DRM, but Amazon has its Kindle app on just about every device imaginable, so you’ll always have access to your book collection, even if you decide to leave the Apple ecosystem. You’ll also have access on the Kindle itself, which is nice — reading books on an iPad isn’t always ideal. Plus, the Kindle app is just pretty awesome as it is.

Pocket Casts Instead Of Podcasts 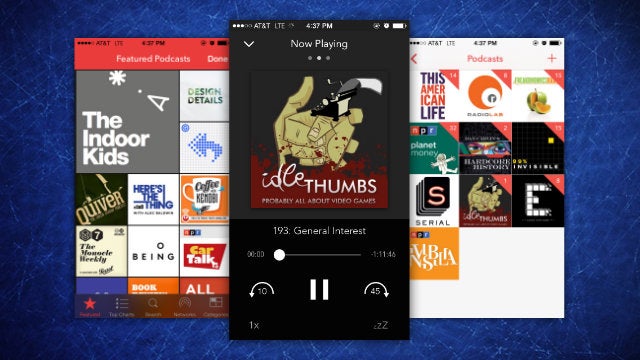 The Apple Podcasts app got off to a really bad start and it still hasn’t recovered. It’s fine if you listen to a podcast or two, but it never seems to properly save your place and it’s lacking even semi-advanced features. In place of that, we like Pocket Casts ($4.99). It does everything a podcast app needs to do, including syncing subscriptions and playback across devices, automatically downloading new podcasts, and playing on AirPlay and Chromecast. Basically, it’s everything Apple’s Podcast app should be.

Simplenote Instead Of Notes 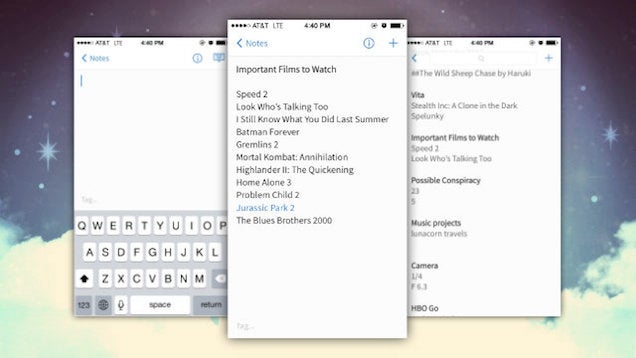 The default Notes app is perfectly fine if you’re hooked into the Apple ecosystem, but the fact that it only syncs with iCloud is a bummer for most of us. Instead, we prefer Simplenote (free). It’s just as simple and easy-to-use as Apple’s option, but it syncs with its own internal service. That means you can easily leave Apple with all your notes intact. Simplenote also has some great little extra features, including tagging, instant search, list sharing and revision history for your notes.

PlayerXtreme HD Instead Of Videos 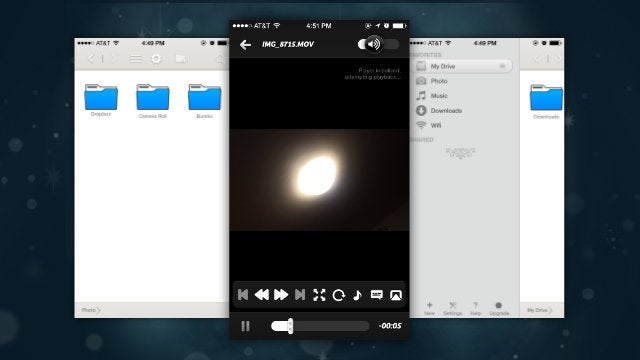 The biggest problem with the default Videos app is the lack of support for a wide range of video formats. PlayerXtreme HD fixes that. It supports just about every video format under the sun, has a simple interface for quick navigation, and even supports Wi-Fi transfers between two devices with the app.

Ecoute Instead Of Music 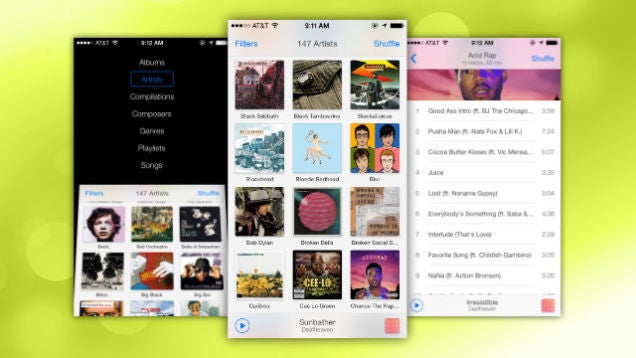 The Music app is fine, but it’s pretty barebones. Ecoute ($2.49) adds just enough features that it’s worth using over the Music app without being overwhelming. It uses gestures to control music quickly, integrates with a variety of social networks, and has advanced shuffle controls. More interesting is its iTunes-esque song queuing that lets you easily create playlists on the fly.