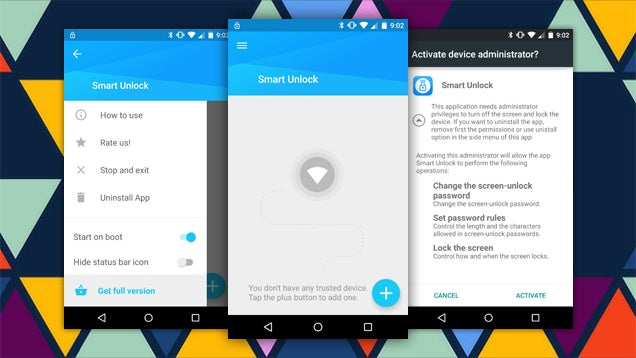 Android: One of the coolest new features of Android Lollipop is the ability to unlock your phone with a Bluetooth device. Until 5.0 rolls out to more than almost zero people, most people can't use it. Unless you have Smart Unlock.

The app works on Android 4.0 and up (nearly 90 per cent of active devices, as opposed to the less than 1 per cent that have 5.0). It will ask for permission to be a device administrator. Once you grant access, it will allow you to add specific devices — such as a Bluetooth watch, headset, or car — as "trusted". As long as your phone has a connection to those devices, your lock screen will be disabled.

You can also set it to disable your lock screen when you're connected to your home Wi-Fi, when you're inside a specific physical area, or when it's touched by an NFC chip. The app does not require root. The free version works for 7 days, after which you will be prompted to pay a dollar to unlock the full version.