What You Really Need To Know About Ebola 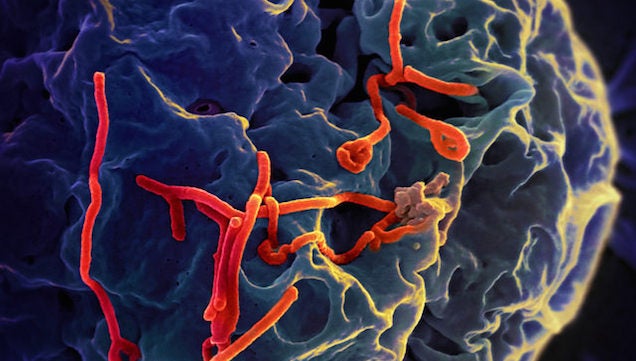 Ebola may be spreading, but rumours about Ebola are spreading even faster. Wired runs down everything you really need to know about the virus.

For starters, the chance of a major outbreak is pretty slim. Wired explains:

It can't spread through the air, and it isn't contagious before symptoms first show up, when a person might unknowingly be a walking disease distributor. Rather, the Ebola virus spreads through infected bodily fluids — such as blood, vomit, saliva, semen and feces — which need to come into direct contact with a mucous membrane (such as the inside of your eyelids, mouth, or nose) or a bit of broken skin.

So as long as you do what you probably already do — keep a safe distance from sick people, wash your hands regularly, be careful sharing items with someone who's sick you should be safe. For more information on Ebola's contagiousness, check out this post from io9.

Those who do come in contact with the virus have something to worry about. Depending on the strain, you're dealing with a 50-90 per cent fatality rate. Symptoms to watch for include headache, fever, aches and nausea. On the outside, Ebola basically looks like the flu, but inside your body something very different is happening:

Though these early symptoms can mimic the onset of the flu, what's going on inside a patient's body is very different from what happens with an influenza virus. At this point, an Ebola patient's liver is being attacked, producing severe abdominal pain. Their blood vessels are gradually being broken down, which can lead to massive amounts of both internal and external bleeding. Organ failure might be setting in. As fluids leak from blood vessels and organs and accumulate in the body, blood pressure drops. Usually, it's a deadly combination of abyssal blood pressure, electrolyte imbalance, and organ failure that delivers the final blow.

If you have the symptoms, you're already a danger to yourself and everyone around you, so isolate yourself and call your doctor to find out what your next step is before heading to a doctor's office or emergency room.

If you want to learn more about Ebola, check out the CDC fact sheet and hit the link below to see Wired's explanation.

Ebola Explained: What You Should and Shouldn't Worry About [Wired]