Use Statistics To Make Better Guesses On Exams 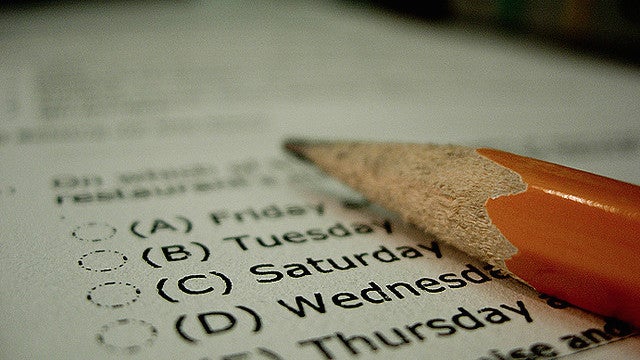 When your teachers are writing multiple choice or True/False tests, they're supposed to keep things as random as possible. However, as the BBC points out, there is a pattern in that randomness, and knowing what it is might help you get through your exams.

Writer William Poundstone crunched the numbers on a bunch of different tests and exams and found that even in the randomness, you can use those statistics to improve your chance of getting an answer right. For example, True/False tests might seem random, but as long as you know a few answers, you can improve the chances your chances of an educated guess. Here's what Poundstone suggests you do:

— Go through the entire test, marking the answers you know, before attempting to make any guesses.

— Look at the known correct answers of the items before and after the one(s) that's left you stumped. When both neighbouring answers are the same (both false, let's say), guess the opposite (true).

— Should the before and after answers be different, guess true (because true answers are more likely overall).

With multiple choice questions, things get a bit harder to quantify, but Poundstone breaks down the numbers like so:

So to recap, pick the second answer (B) on four-choice tests and the fifth answer (E) on five-choice tests.

It's not all statistics though. Poundstone found a few other commonalities that can help you make better guesses. If "none of the above" or "all of the above" are options, they're more likely to be the right answer than the others. Likewise, the longest answer tends to be the right one as well. Finally, Poundstone suggests you look for "continuity errors". This is when an exam setter uses an article like "an" instead of "a" at the end of the question. Chances are, when they do that, they're revealing the answer to you unknowingly. Obviously these guesses aren't a replacement for actual studying, but they might help you in a pinch. Head over to the BBC for a bunch more tips.