I'm Stephen Dubner, Co-Author Of Freakonomics, And This Is How I Work 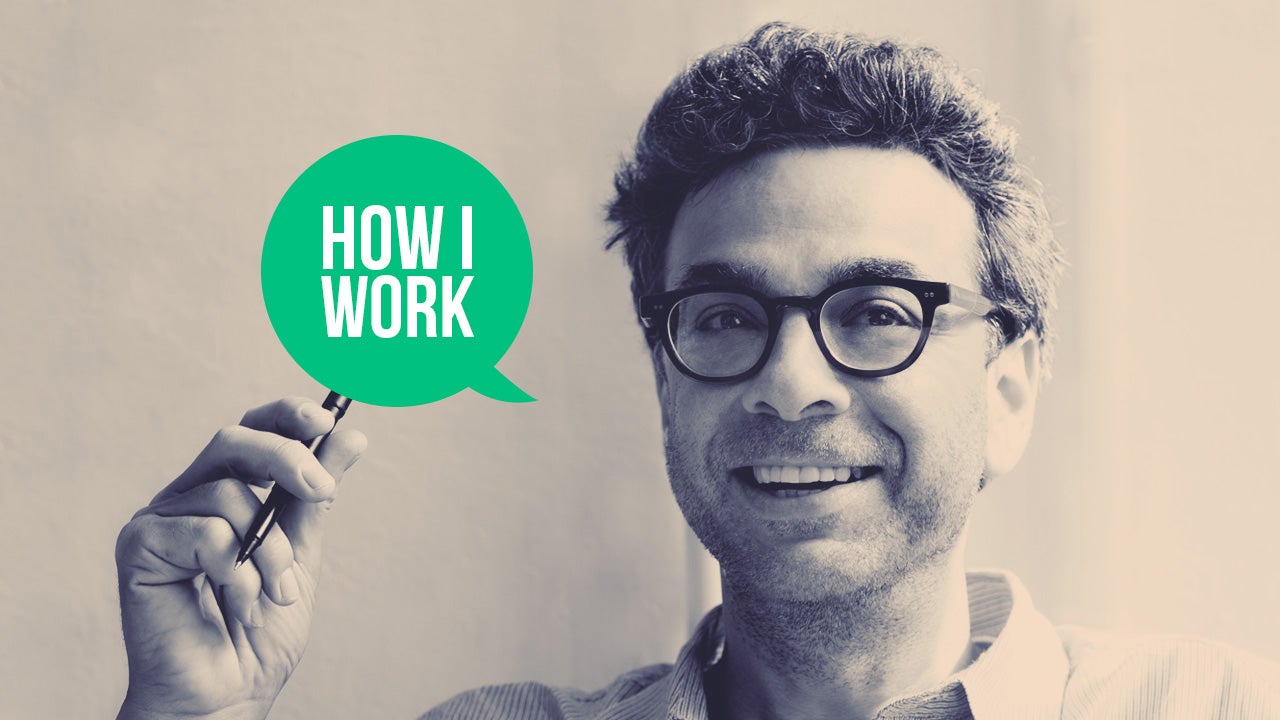 In 2005, Steven Levitt and Stephen Dubner's book Freakonomics brought a new perspective to everyday life through the lens of economic principles — shedding light on everything from parenting to crime and why we act the way we do.

The book sparked its own blog, documentary and radio show, which is hosted by Dubner, where he continues to discuss the "hidden side of everything", and a few followup books, which have sold more than five million copies. We spoke with Stephen to learn about his approach to life, his tools for writing, and how he works.

Location: New York (City). Current Gig: Writer; some radio too; most of it Freakonomics-related at this point, but hasn't always been and someday won't be. One word that best describes how you work: Gratefully. When I was a kid, I worked a lot of physically hard jobs — baling hay, carpentry, etc — and always thought it'd be great to earn a living without having to get so beat up. Current mobile device: iPhone and iPad, both relatively older models. My kids have much newer ones than me. Current computer: MacBook Pro. 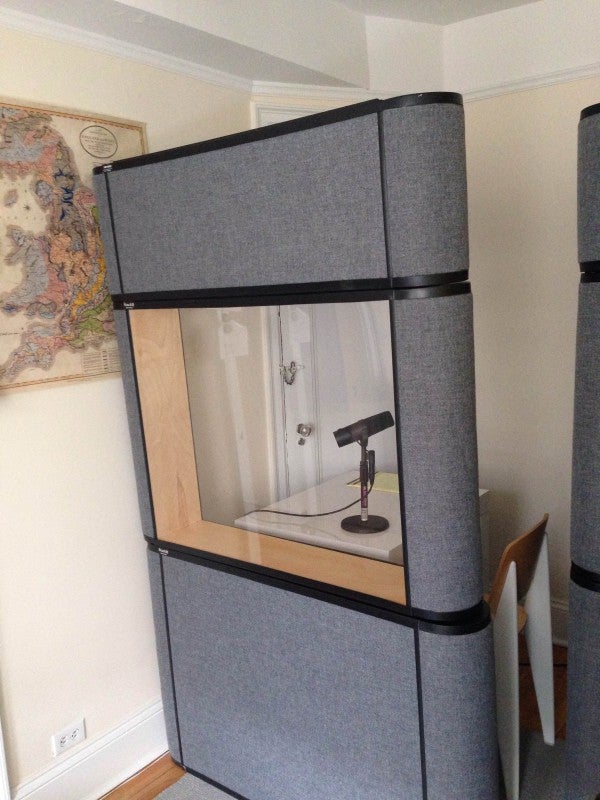 I work in a one-bedroom apartment across the street from where we live, in Manhattan. It's important to have a place to go every day. I love the office — comfortable, peaceful, big enough for all my books, papers, a recording booth for radio. I've had an adjustable desk for years, and usually work standing up until lunchtime and usually sit for most of the afternoon. I really like walking in the city also. Even though we live near Central Park, I'd rather walk on the streets; I like nature just fine but the human activity in New York (and elsewhere) is the most inspiring thing I know.

Image: A little audio setup in my office for recording Freakonomics Radio. I do the bulk of my recording down at WNYC's studios, but it's handy to have this capacity in my office as well. The map on the wall is "the map that changed the world," by an English geologist named William Smith, subject of a fantastic book by Simon Winchester. You will hear about it in an upcoming episode of Freakonomics Radio.

I delegate everything possible. (I have a full-time assistant, which went from being a luxury to a necessity.) I get up early enough so there are no distractions for the first few hours and every day I write up a pretty detailed schedule for what I'm going to work on, including the non-exciting stuff that has to get done. I am getting better at saying no to more things, which is important for everyone. If you spend your day doing too many things you don't want to do, you'll get a shade unhappier every day.

I've tried several methods over the years — Word docs, Things, etc. — but right now my preferred method is a combination of pen and paper and iCal. For specific deadlines, I usually enter them in the iCal so I can see them on a long-range basis; if I have an article or book chapter due on a certain date, I'll put in a 10-day reminder. But I also make a pen and paper to-do list every day, including short-term items, long-term items, and I break it down into Desk and Non-Desk. 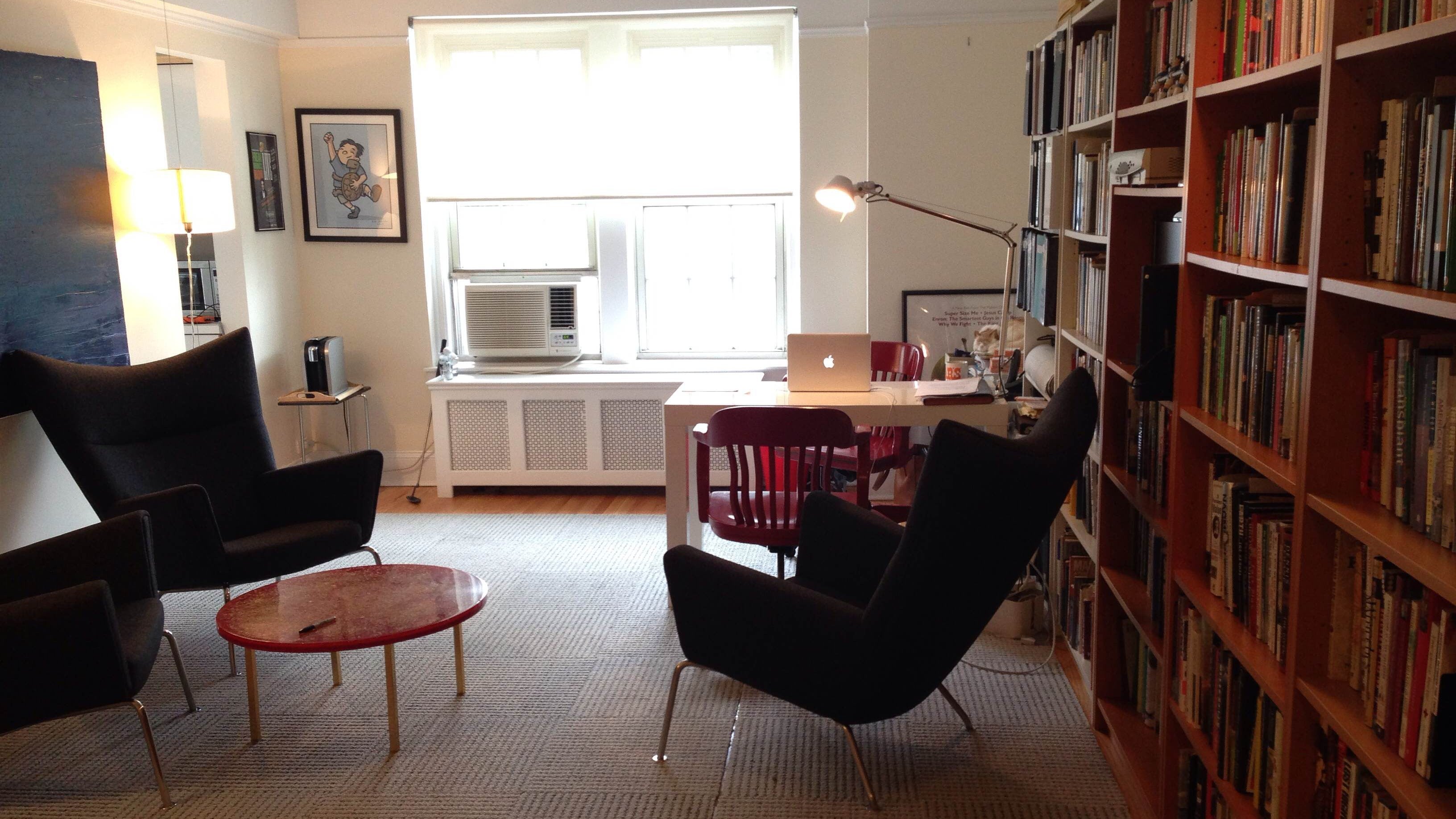 Image: The main part of my office; there is where my assistant sits and where we have occasional meetings. (My writing room is off to the left, sequestered a bit.) The illustration just left of the window — the boy hugging a turtle — is by the awesome Christoph Niemann, an illustration from the kids' book I wrote, "The Boy With Two Belly Buttons."

I don't think there's anything I do better than everyone. Here are a few things that I do relatively well:

I usually listen to nothing. Too distracting. For some tasks — answering emails of a certain kind, e.g. — I'll might listen to music without vocals (Pablo Casals playing Bach, e.g.). I love listening to good radio (WNYC, e.g.) or podcasts while driving, running, etc. 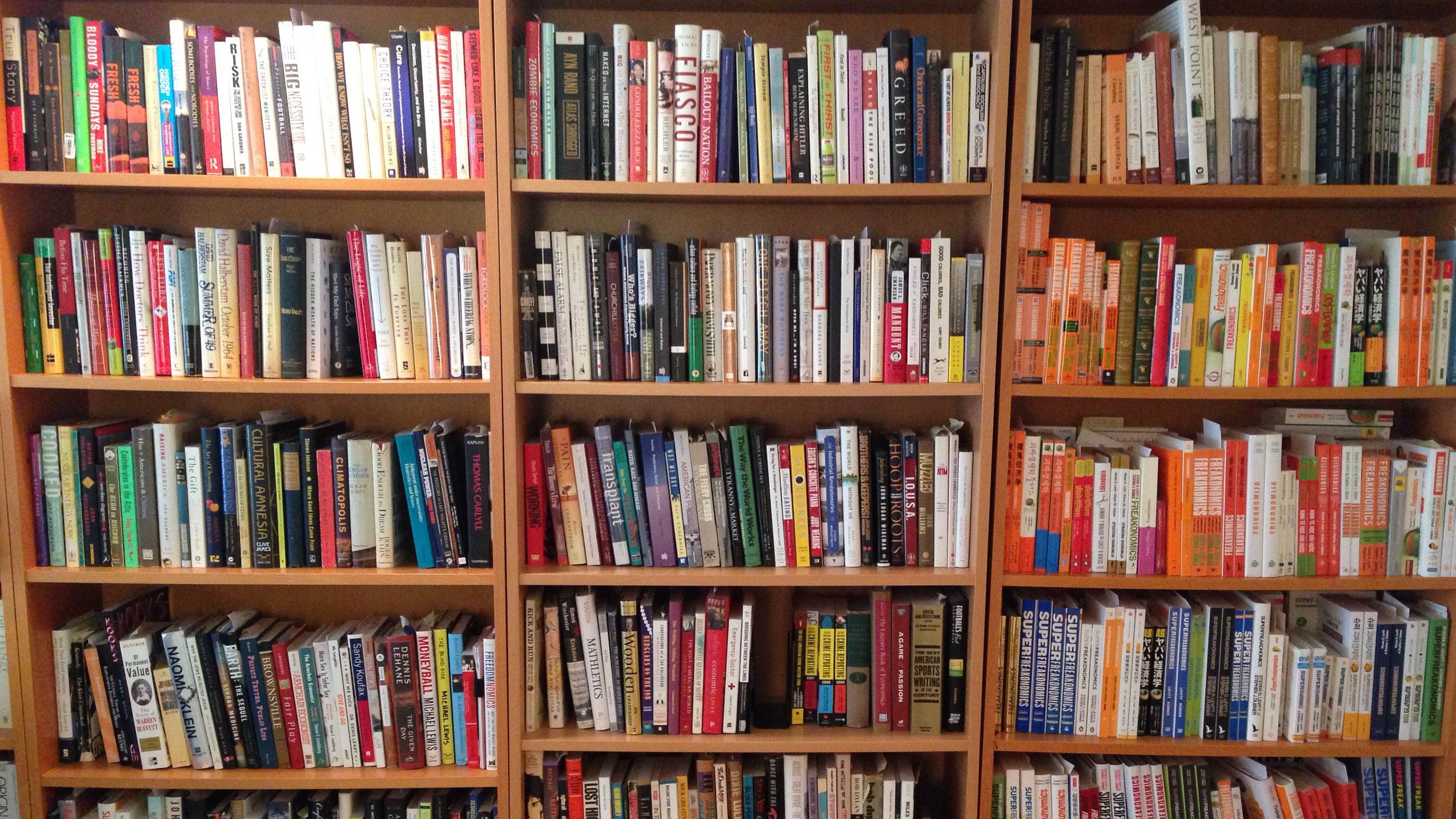 Image: It is important to me to have lots of bookshelves wherever I am. Visiting someone's home or office and seeing no books always makes me a bit despondent. The shelf on the right here are books that I've written, including many foreign editions of the "Freakonomics" series.

I am usually in the middle of many books at once. Annoying but also attractive. Right now I'm currently reading a heap of old golf books I bought at a great used-bookstore in Portland, Maine; among them, George Plimpton's The Bogey Man (not my favourite Plimpton, but any Plimpton is good Plimpton). Just finished (and loved) Ben Ryder Howe's My Korean Deli. Currently embarked on: Ill Fares the Land (Tony Judt); Eating on the Wild Side (Jo Robinson); Who's Bigger?: Where Historical Figures Really Rank (Steven Skiena and Charles B. Ward); Choose Yourself (James Altucher); also a Spanish-language textbook (I'm studying Spanish, for kicks) and a bunch of books that my kids will be reading in school this year, Steinbeck and Orwell and some modern stuff too.

I have characteristics of both. I am very happy spending a lot of time on my own (which is why I became a writer in large part) but also happy to spend some time with a handful of other people (which is why I have a family, and make a podcast with a nice, fun crew). I am not much for big crowds although I find myself in them often enough that I have learned to fake it.

I'm a big fan of sleep. I think that as much emphasis as (some) people put on diet and exercise, sleep is often overlooked as a foundation of physical and mental health. I also love the mystery of it — the fact that our bodies need to plunge into unconsciousness for a full third of our operating life in order to regenerate, flush out toxins, fix memories, etc. So... I usually go to be pretty early (by 10PM), set the alarm (usually 5am), and especially when I'm travelling, sleep with earplugs and an eye mask. Fun, huh? But it works for me…

I have come to really appreciate the upside of quitting. It's not a natural instinct — in fact we are usually counseled against it — but I've made myself a lot happier over the years by quitting things that it would have been easy to stick with for much longer than desirable.