Cold Brew Your Own Cheaper And Better Tasting Coffee Liqueur 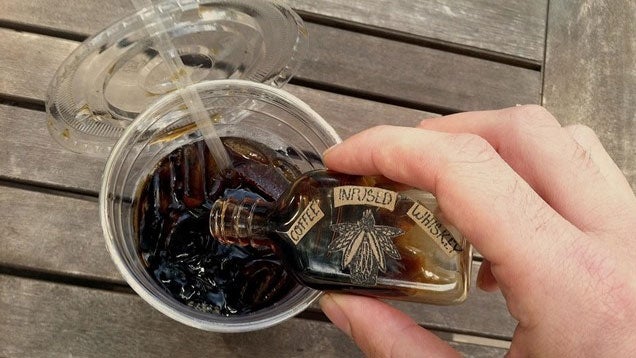 Infuse liquor with coffee, and you'll get a strong coffee brew with a big kick. Instead of brewing the coffee hot and combining it with the alcohol, try a lazier cold-brew method for a smoother, sweeter coffee liqueur.

Depending on the alcohol and coffee you use, you could also save money on your homemade coffee liqueur — and you'll also be able to control the quantity and quality of the brew. WonderHowTo steeped half a cup of coffee in two cups of ice-cold vodka overnight and afterwards added vanilla and sugar for a Kahlua-like drink (although, yes, Kahlua is typically a rum-based drink). They also used Scotch whiskey as the coffee steeping liquid.

The results? Pretty damn good. Both the coffee-and-vodka and coffee-and-Scotch brews were smooth with no hint of acidity. Best of all, both tasted like coffee — real honest-to-goodness coffee, but with a massive, for-adults-only kick.

And because the steeping process was so long, I could taste different notes of fruits, nuts, and spice in the coffee, all of which were amped up by the alcohol. Once I added agave and vanilla to the vodka version, I proclaimed it the best homemade Kahlua I'd ever produced.

Cold-brewing coffee might be the better method to go with this, because it cuts the acidity of the coffee.

Check out WonderHowTo's article for more details and tips.