How To Survive A Party Or Social Gathering As An Introvert

Introverts are awesome people who simply prefer to relax by spending time alone or with a quiet group of friends. However, parties and social events continue to exist and sometimes you have to get out of your bubble. Here’s how to conserve your precious willpower without hating the whole experience.

Learn When It’s Worth Going Out 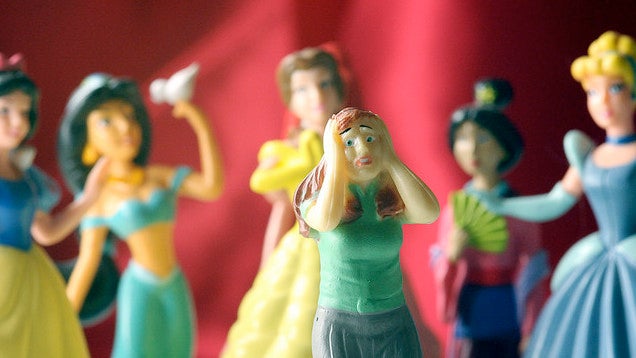 Socialisation is as inevitable as it is healthy, even for introverts. However, as with any diet, there are certain things that are good for you and some stuff you can probably leave out. Here are some of the situations you can avoid and others you probably can’t.

What You Can (Optionally) Avoid

What You Can’t (or Shouldn’t) Avoid

Of course, this isn’t to say that you can only go to events on the correct list. If you’re looking for something to avoid, the former list is probably better to choose from. They’re not hard fast rules (I’ve avoided plenty of my own birthdays), but when it comes to prioritising your time and energy, some events are worth more than others.

Have a Goal For Your Outing 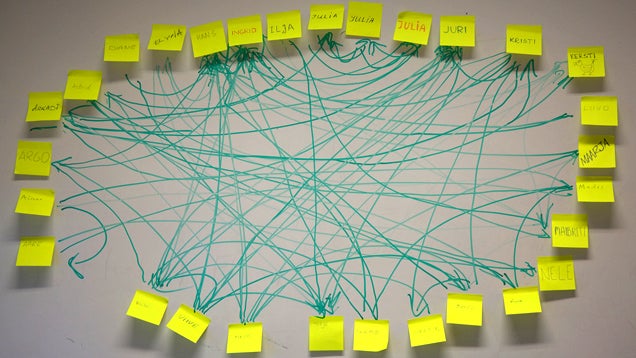 It may sound about as enjoyable as filling out a stack of paperwork to get a sandwich, but having a specific goal for your trip out can help make it easier to socialise. Are you going out to network for your career? Give yourself a socialisation quota. Celebrating a friend’s birthday? Focus on them for a good portion of the evening (but give them room to talk to other people too.) Trying to meet someone to date? Talk to attractive people you don’t know.

Having a goal helps you define what you want to accomplish in an outing, but more importantly, it keeps your brain focused. Part of the problem introverts have with big social gatherings is the constant flood of external stimulus. By giving yourself a specific task, you occupy your brain so it’s less focused on the thumping music or bright lights.

Bookend Your Outing with Quiet Time Before and After 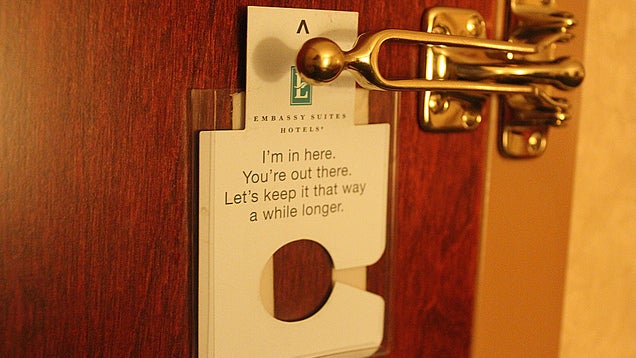 One of the key differences between introverts and extroverts is that introverts recharge their metaphorical batteries by being alone, while extroverts tend to enjoy crowds and stimulation. While your extroverted friends are coming to the party to get energised, as an introvert you need to come prepared with your own fuel.

Whenever possible, make sure to take some time for yourself before you head out for an evening of socialising. Read your book, watch something on TV, go for a walk or do whatever it is that relaxes you. Then, when you’re feeling pumped up, head out for the shindig. If you try to go straight from work or a full day of being around other people to a party, you’re going to have a hard time keeping your energy levels up.

Once you’re out, give yourself some space on the tail end as well. Whether you’re taking the next day off or leaving the party early so you can unwind by re-watching Futurama for the 15th time, make a space in your schedule to gain some of your energy back. Not only will having space for yourself after the hootenanny relax you, it will give you something to look forward to later so you don’t feel trapped or overwhelmed by the group.

Find a Quiet Hiding Spot to Take a Break 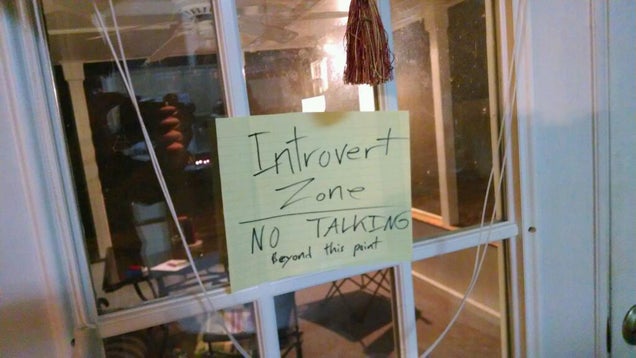 Filling up on you-time before you go to a party is great way to prepare yourself for socialisation, but your tank can still run out before the evening is over. When you first arrive, scout out a place that you can retreat to if you need a moment. It can be a patio, a kitchen, a bathroom, or even just your car.

As Psychology Today explains, these moments alone provide some much-needed relief from the various stimuli that overwhelm introvert brains. You don’t want to spend all your time away from the group, but even a few minutes can be enough to recalibrate:

Yeah, I have a few party tricks up my sleeve, don’t you? For example, admit it: At some point at a party, you’ve gone into the bathroom not because nature called, but for a moment of quiet solitude. Closing that bathroom door in that small, silent room … ahhhhh. It’s a whole different kind of relief. I know one woman who admits to shutting herself in the bathroom — at her own parties and others’ — and reading.

Even better than finding a spot at someone else’s party, however, is making a space at your own. The picture at the start of this section was taken at an introverted friend’s birthday party. The back patio was designated as a specific place for introverts to take a break whenever they need to. If you have a group of friends who understand that being introverted means you need a break now and then, set up your own space. You can even start it at your own parties. You might be surprised how quickly people will latch on to the idea. It’s like having an area for smoking breaks, but without the second-hand lung cancer. 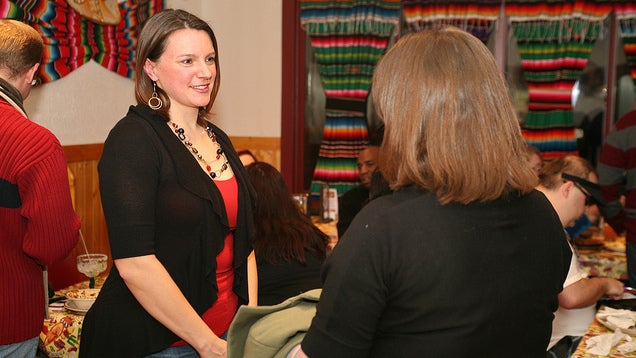 Being introverted doesn’t necessarily mean being shy, but the two often overlap. If you’re having trouble talking with new people, have a friend or two that you can piggyback off of to meet strangers. Let your friend start conversations with someone you don’t know, then offer your input as they discuss. You can easily sneak into conversations this way.

You don’t want to spend the entire evening talking with the people you already know (or maybe you do, but if you’re out to socialise or network, that’s probably not helpful). However, start by talking with your friend and then include new people into the conversation. Ask for their input on a topic you’re already discussing. This trick allows you to bring other people into your own, existing conversations, which may be more comfortable for introverted brains.

It’s also helpful to have multiple friends you can do this with, spread out over the party. If you came to the party with a group of extroverts, they may want to mingle. If you can pick out two or more people you already know, you can use them as anchor points (as well as escape vectors) for conversation. If you find yourself stuck with someone you don’t want to talk to, politely say you need to check in with Friend A. When you’ve spent some time piggybacking on Friend A and want to give them a break, check out what Friend B is up to and talk to that group.

Accept Small Talk as a Part of Life 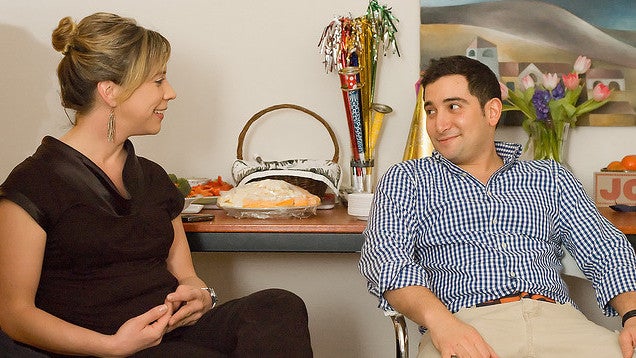 Let’s face it. You just can’t get to know new people without small talk. While I might be able to talk for hours about spreadsheets (it’s a sickness, really), most people probably find it boring. Small talk is the path we take to that common ground. What you do for work, where you live, who you know, and what you think of this cheese dip are the highways you take until you can jump off on a more interesting social exit.

The truth is, there’s no one trick that makes you good at small talk. There are plenty you can try, but it’s not a science. However, accepting it as normal and ok is as essential to making it work as oil is to an engine. Reddit user IAmaJampire explains two key points about small talk that help explain why you shouldn’t fear it:

People want to know you As an introvert I find that my default is to think that people don’t really care and don’t want to know me. THIS IS A FALLACY. Your brain will tell you that from time to time. It’s mostly not true, unless the people you’re with are total D-bags anyway.

You get what you give You will get out of a party what you put into it. You might need to build up to talking to people you don’t know, but making an effort is half the battle. You’ll be surprised at how people will react to this. And if they don’t, it’s not your fault. You tried!

Unless you believe you have met all the cool people you could ever need or want in your life, chances are someone out there has a cool story. Small talk is how you find them. And they want to be found. Small talk isn’t a scary monster that’s out to get you. It’s a friend that wants to introduce you to someone awesome. You don’t have to enjoy doing it all the time, but adopting an attitude that it’s not the worst thing ever will go a long way.

While introverts are not inherently bad at socialisation, we do tend to have less socialisation experience due to our natural inclination to hide. That being the case, don’t be afraid to brush up on your body language and small talk skills. More importantly, however, accept that small talk is a normal part of life and you’ll have an easier time getting out of your shell when you need to.

Have an Escape Plan 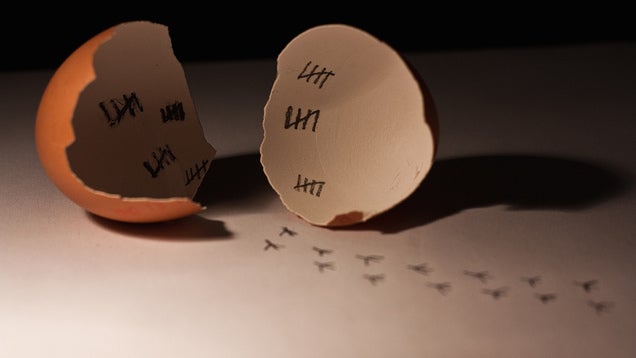 For an introvert, one of the worst things that can happen at a party is to be trapped there. When your energy runs out, you’ll want to keep one eye on the door, but if you rode with friends, you’re stuck waiting. While you probably want to have a friend or two to talk with, it may be better if you’re not also their transportation. At the very least, try to have an alternative way home.

Having an escape plan can help take the pressure off and put you in control of your energy. While the more extroverted people at the party may not want it to end, you can slip out without raining on someone else’s parade. Having a degree of control can also make you feel a bit better about hanging out with people you don’t know.