Why We’re Hooked On Social Networks 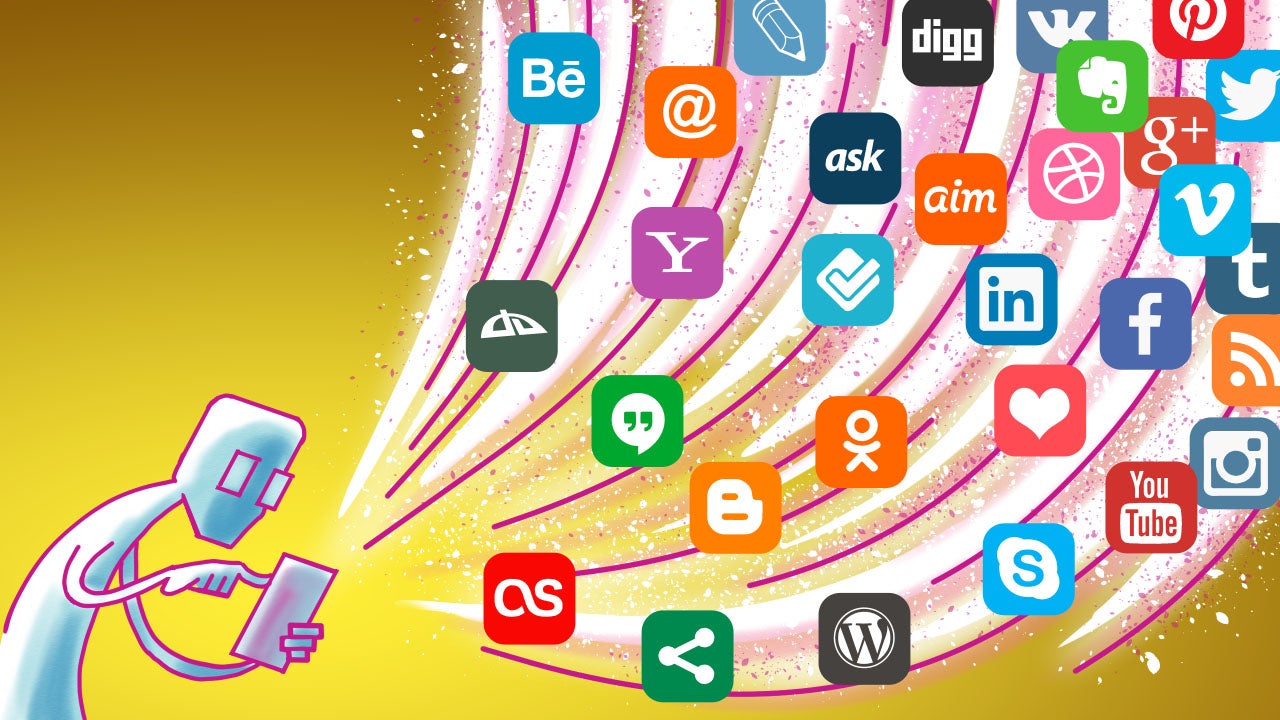 Births, job losses, divorces, raises, holidays, successes, photos, drawings, articles, failures and music: Social networks are places we share our stories. Sometimes those stories are personal, sometimes they’re informative, other times they’re just stupid. Let’s take a look at why we feel compelled to do it.

Years ago, scrapbooking and diaries were common activities for people. Cutting out articles, writing little notes, and putting them all together was an easy way for people to keep track of everything they cared about. Similar to social networks, the Smithsonian points out that scrapbooking was the 19th century equivalent of dealing with information overload:

The solution to overload? For tens of thousands of Americans, it was the scrapbook. It let them take this ephemeral media, find the best parts, and give them permanence — and gravitas — by pasting them into a book.

Suffragists, too, compiled scrapbooks of clippings, of their public appearances, speeches and newspaper articles, with an eye to preserving their own role in history. “You could put them on the parlor table and the rest of the family could see what you were doing,” Garvey says.

In essence, scrapbooking “turned us into documentarians,” [Susan] Tucker adds. “People always had this impulse to remember, and to guard what they knew…”

In a sense, scrapbooks became more like diaries, a way to forge one’s identity — in sometimes complicated, Instagram-like ways, says Jessica Helfand, a Yale University critic in graphic design and author of Scrapbooks: An American History.

Which makes sense. A Facebook wall is probably a tailored representation of what interests you. It’s complete with cuttings from articles you’ve found important, articles friends have sent you, and whatever else you’ve wanted to remember over the years. It also explains why you’ll often see posts on people’s walls from friends with notes like, “Here’s that link we talked about yesterday,” or “Thought you’d enjoy this.” Sites like Facebook are just as often the modern equivalent of the fridge door as they are a scrapbook.

We Want to Belong 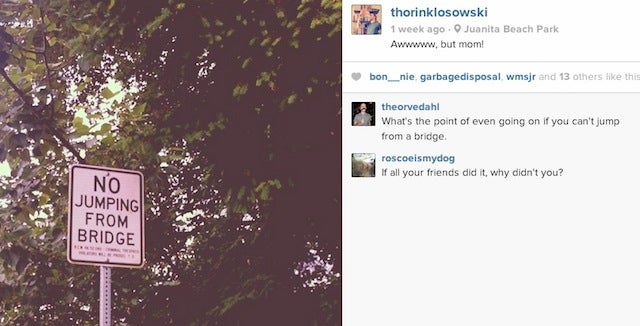 For example, a recent study published in Social Influence showed that people who participate on Facebook tend to feel a sense of belonging when information they post gets a response from friends. In a press release, researcher Dr Stephanie Tobin sums up her team’s findings:

“Our research shows that feelings of belonging are threatened when users stop generating content or participating online, and when information they have posted does not receive a response from others…

The studies allowed us to examine how belonging depends on how much people are sharing on Facebook, the kinds of experiences they are having on the site and whether they are being ignored or validated by others… The results clearly identified that active participation is necessary to decrease feelings of social rejection.”

That sounds simple enough: the more friends “like” your posts, the better you feel about yourself. But as The Atlantic points out, trying to find a sense of belonging online tends to backfire in a lot of cases:

Unfortunately, the catharsis of posting those sad quotes may only make people lonelier in the end. The oversharing doesn’t seem to elicit the warm, comforting Internet embrace that posters seek. People use Facebook to present themselves the way they want to be seen, and to get a sense of belonging, so says a 2012 study. Seidman’s study also measured participants’ motivations behind their posts, and found that they were mostly self-oriented. Posters sought attention and a feeling of inclusion, but were seemingly less interested in expressing caring for others. They treated Facebook like a drive-thru window, seeking a quick and easy dollar-menu pick-me-up.

Of course, it’s not all bad news. That sense of belonging comes from all sorts of places online. For example, the people you follow on Twitter likely share similar interests to you. Sites like Tumblr or Pinterest showcase similar ideas based on what you like. The same goes for all the other sites out there that help facilitate real world friendships as well. In the end, how much you feel a sense of belonging depends on how you use those social networks. The New Yorker sums it up nicely:

The key to understanding why reputable studies are so starkly divided on the question of what Facebook does to our emotional state may be in simply looking at what people actually do when they’re on Facebook. “What makes it complicated is that Facebook is for lots of different things — and different people use it for different subsets of those things. Not only that, but they are also changing things, because of people themselves changing,” said Gosling. A 2010 study from Carnegie Mellon found that, when people engaged in direct interaction with others — that is, posting on walls, messaging, or “liking” something — their feelings of bonding and general social capital increased, while their sense of loneliness decreased. But when participants simply consumed a lot of content passively, Facebook had the opposite effect, lowering their feelings of connection and increasing their sense of loneliness.

Research is still ongoing, so it’s hard to say where we’ll end up in the long term. For now, it seems like if you want that sense of belonging, you’ll need to participate in your social network of choice, not just flood it with your own thoughts. Like most real-world social relationships, it’s complicated, but the more you put into it, the more you’ll get out of it.

As human beings, we like to share information with each other. Research from Harvard University shows that the reward system in our brain floods us with happy thoughts when we share information about ourselves. It’s not unreasonable to assume that sharing information online works the same way. Writing for the Atlantic, author Frank Rose sums up the research like so:

[W]e get high from being on the receiving end of social media. But that’s only half the story. The Harvard study helps clarify why we are so eager to be on the sharing side as well. “This would certainly explain the barroom bore, wouldn’t it?” said Brian Boyd, the author of the literary Darwinist treatise On the Origin of Stories, when I asked him about the brain’s response to acts of self-­disclosure. What about estimates that, while 30 to 40 per cent of ordinary conversation consists of people talking about themselves, some 80 per cent of social-media updates fall in the same category? “Ordinarily, in a social context, we get feedback from other people,” Boyd told me. “They might roll their eyes to indicate they don’t want to hear so much about us. But online, you don’t have that.”

This doesn’t mean that sharing something on Facebook or any other social network will make you happy. It just means that you get a little burst of joy when you share information, get likes and retweets, and otherwise justify your existence. It’s like the small bit of joy when you bite into your favourite snack. It’s not life changing, but it makes that singular moment a little better.

We Use Social Networks to Define Ourselves

It’s probably no surprise that many of us use social networks to define ourselves to other people. In its own way, a social network is the modern equivalent of a band shirt: it’s a simple way to define yourself to others at a glance.

Professor Russell W. Belk describes the impulse to define ourselves in his paper “Extended Self In a Digital World,” published in the Journal of Consumer Research. Slate provides a few choice quotes:

The resulting disinhibition leads many to conclude that they are able to express their “true self” better online than they ever could in face-to-face contexts. This does not mean that there is a fixed “true self” or that the self is anything other than a work in progress, but apparently self-revelation can be therapeutic, at least with the aid of self-reflexive applications…

[It appears] that we now do a large amount of our identity work online. For the Internet constantly asks us “Who are You?” “What do you have to share?” Coupled with new self-revealing proclivities, this incites more open self-extension than in a pre-digital world.

Which is to say, some of us use social networks to define ourselves and to refine how you present yourself to the world. In marketing speak, it’s a “personal brand” that you try to present as interesting, worth listening to, and worth engaging with. Social networks give us the time to selectively share and define ourselves as interesting people, because the people who follow us don’t have to hear about our boring minutiae (although plenty of us still share it). Plus, you have more time to present yourself as you intend. Speaking with The New York Times, social psychologist Dr Berger sums it up:

“In most oral conversations, we don’t have time to think about exactly the right thing to say…We fill conversational spaces by saying what’s top of mind. But when you write something, you have the time to construct and refine what you say, so it involves more self-presentation.”

Of course, everyone is different. Some of us might only use social networks as a messaging service between friends and family. Others may use them as newsletters to keep in touch with family. Some may use them purely for competitive terms to keep track of who lost weight or who is successful. While others might only keep accounts around for logistical purposes like authorizing apps and services. Meanwhile, plenty of people don’t bother with social networks at all.

But those who share a lot are using social networks for something else altogether, and it’s likely something that will change and adapt over time. When we know why we share, we can use that to our advantage. Or perhaps more importantly, we can maintain social media accounts without losing our well-being in the process.