Third-Party Apps That Are Better Than The Official Counterparts

Popular services like Twitter, Dropbox, YouTube and Wikipedia generally have their own apps on various mobile and desktop platforms — but sometimes third-party developers swoop in and make better alternatives. Here are some prime examples of where the unofficial software works better than the “authorised version”.

Twitter is a prime example of when the official apps are rarely even worth mentioning when the third-party ones are so much better. Here are our favourite “alternatives” across a range of categories.

The official YouTube app is fine enough, but it’s not particularly inspired. Jasmine is a YouTube app for both the iPad and iPhone that looks fantastic and has some handy features that set it apart from the official YouTube app. Personally, I’m a fan of the night theme and dimming support, and Jasmine also does a good job of remembering where you’re at in long videos, has better playlist management than the official app, and overall just seems a lot easier to use. Plus, it’s free, so if you don’t end up liking it you don’t feel like you wasted your money.

Wikipanion Instead Of Wikipedia

The official Wikipedia app is outdated and pretty feature-bare. It works, but it’s no better than just pulling up Wikipedia in your browser. Wikipanion actually adds some features to differentiate it from the mobile app. First off, it makes articles easily readable. It also allows you to save articles for offline viewing, queue pages to read later, and has a history tab for going back to what you’ve seen. It’s still pretty simple, but the added features put it a step above the official app. 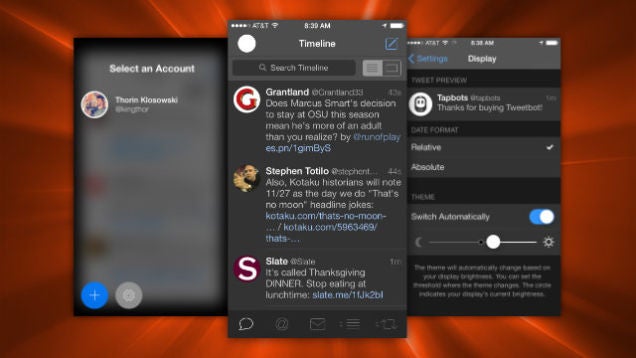 The Twitter client on iOS is fine for looking at Twitter, but it’s fairly simple and doesn’t have much in the way of advanced features. Thankfully, you have a lot of different options to access Twitter for your smartphone, and Tweetbot for iOS is our favourite. It’s clean, easy to use, feature-packed, customisable and has mute filters. More importantly, it’s updated often and always gets new features. The mute feature alone is well worth the asking price of $6.49.

Reeder 2 Instead Of Feedly 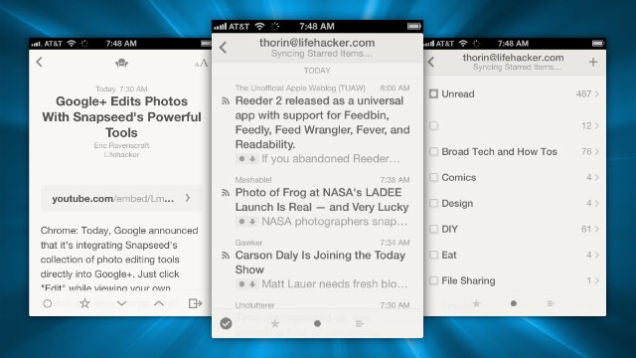 The official Feedly app is pretty basic and doesn’t seem designed for someone who reads a lot of RSS feeds. Thankfully, Feedly is accessible from any third party app. We’re fans of Reeder because it’s powerful, easy to use, and makes reading RSS actually enjoyable. What’s especially nice about Reeder is how many other apps it also supports for free — if you want to save articles for later reading, you can do so with just about any other service out there. Likewise Reeder has all kinds of great features including a solid night reading mode and options for keeping bandwidth usage low.

Unbound For Dropbox Instead Of Carousel

Dropbox’s recently released Carousel is all about photo management, but as a gallery it’s difficult to actually use. If you typically use Dropbox for photos, I’m a bigger fan of Unbound for iOS. As a competitor to Unbound, it gets everything right. It’s fast, offers auto uploading, protects photos behind a passcode, and does batch uploading. It’s really everything that Carousel is supposed to be.

Know of other examples where an “unofficial” app is a better choice? Share it in the comments.