The Best Way To Point Your Wi-Fi Router Antennas: Perpendicularly 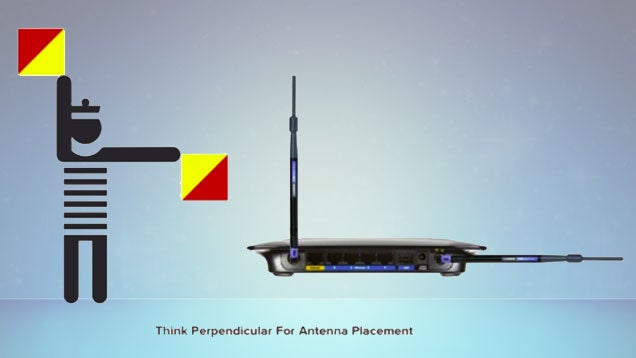 Raise your hand if you thought pointing both of a router's antennas straight up was better for Wi-Fi reception. Yeah, us too. According to a former Apple Wi-Fi engineer, however, the best placement is to have one antenna vertical and the other horizontal.

In an enlightening post about Wi-Fi on the Mac Observer, Alf Watt, who also created Wi-Fi utility iStumbler, explains why the perpendicular orientation is better:

This is because radio reception is maximized when both client and access point have matched polarization (antennas pointing along the same plane).

By pointing antennas both ways, you'll maximise radio reception no matter which way your device's antenna is oriented.

Check out the full post of the Mac Observer for more Wi-Fi tips, including why you should use the same SSID for all your access points.