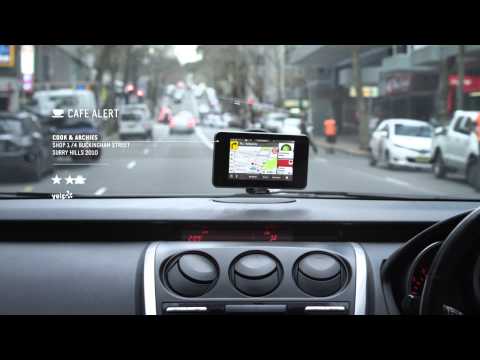 Navman’s SmartGPS is a 5-inch Android tablet — running quite an old version of Android — that syncs over Bluetooth or Wi-Fi with your smartphone, giving you turn-by-turn driving directions and live traffic updates, as well as extra info like the cheapest petrol nearby and any cafes and restaurants in the area. But is it still worth buying a standalone GPS in 2014?

The big hook of the SmartGPS is that it integrates with a few key services on your smartphone — Yelp and Foursquare in Australia, and Menumania in New Zealand. If you’re a big user of these apps already, you’ll see the advantage that Navman offers here over other GPS competitors; they have a great deal of info about places to see and places to eat in Australia’s capital cities.

To use the SmartGPS to its fullest, you can connect it to an existing or hotspot Wi-Fi network — like the one created by your smartphone — or you can use Bluetooth instead. With that sync, the SmartGPS regularly checks Yelp and Foursquare and gives you a streaming list of nearby cafes, restaurants and points of interest, in the same way that it handles regular location-finding and navigation

What Is It Good At?

Ignore its instructions, and the SmartGPS doesn’t go crazy — it quickly and quietly recalculates the route. The live-stream of nearby Yelp and Foursqure locations works well, too — I noted a few nearby locations on my test drives that I didn’t know were as close as they were. Yelp’s rating system tie-in also makes choosing a nearby restaurant or cafe a little easier. It’s all something that could be done on your smartphone, but the SmartGPS brings it all to one place.

The SmartGPS, when hooked up over Bluetooth, also functions as a handsfree speakerphone. The quality is not bad — far better than the microphone and speaker inside your smartphone, but not as good as using your car’s Bluetooth handsfree (if you have it). The speaker inside the SmartGPS can also be used to play music — there’s a microSD card slot and audio input — but it’s a little out of its league for that.

There’s a companion app for iOS and Android that can send data to your SmartGPS — you could set the destination on your iPhone if that’s where you’re comfortable typing, for example — and also give you directions on foot to your destination. It’s a bit unnecessary — Google and Apple Maps are already good enough — but if you want to buy into the entire Navman ecosystem, the app works perfectly well.

What Is It Not Good At?

As 5-inch screens go, the SmartGPS’ one isn’t fantastic. It’s relatively low resolution, and the maximum brightness is mediocre — it’s fine for viewing on most days and at most angles, but with strong sunlight and with your car pointing the wrong direction, you might be caught short. It’s OK, just not excellent.

The mounting hardware for the SmartGPS is similarly alright, but I found that going over bumps and potholes — I live quite near Parramatta Road, which has the same surface characteristics as the moon — it was a little creaky and wobbly. When you buy a dedicated GPS, you expect that the mount will hold it steady in even the worst road conditions — Navman’s bundled hardware just feels a little cheap.

I just can’t get over the fact that the SmartGPS costs $299, and needs a smartphone, which likely costs more than it, to work at its fullest. I can see it being an appropriate buy for some users — full-time drivers who need a dash-mounted device, for example — but not the majority of car owners. There’s just not a great deal that it does that you can’t do with an iPhone or Android phone already.

If you have a pressing need for a GPS, but don’t want to permanently mount your smartphone in your car, the Navman SmartGPS makes sense. If you have it installed properly and if you commit to using it whenever you need directions, rather than looking on your smartphone or before you travel, the SmartGPS works well.

But if you’ve got a smartphone already, and enough spare mobile data that syncing the SmartGPS isn’t an issue, then you’re probably okay with using the mapping service — be it Apple Maps, Google Maps, or a preinstalled map like Navigon — and this makes the SmartGPS somewhat redundant.

So there’s a niche market for Navman’s SmartGPS — someone who wants a dedicated GPS system, can share data with it from their smartphone, but doesn’t already use their phone for directions. If this sounds like you, the SmartGPS is $299 from Dick Smith, Harvey Norman and other electronics stores around Australia.