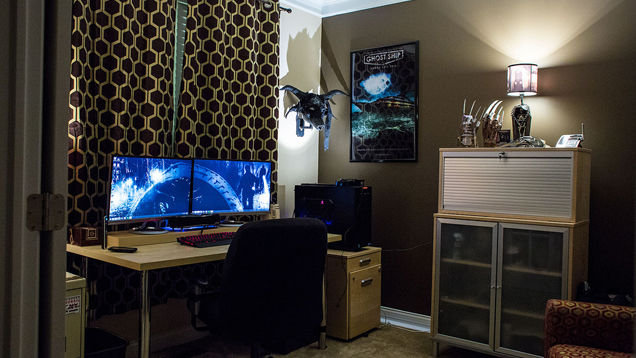 If you're a fan of horror films, you might appreciate today's featured workspace. While elegantly decorated in general, Christopher Brielmaier's home office is also adorned with a skull mask, Baphomet mask, Freddy Krueger gloves, and other spooky items.

The office isn't as horrifying as you might imagine from the owner of Rogues Hollow, which offers design services for haunted houses. If you head to Brielmaier's Flickr photostream below, though, you'll find plenty of interesting items to look at (aside from the two Asus IPS monitors, IKEA desk, and honeycomb curtains).

If you have a workspace of your own to show off, share them with us by adding it to ourLifehacker Workspace Show and Tell Flickr pool. Make sure any photos you include are at least 640x360. Keeping them to 16:9 helps, too! Include a little text about the stuff you used, how you came up with the design, and any other relevant details. If your clever organisation and good design sense catches our eye, you might be the next featured workspace.