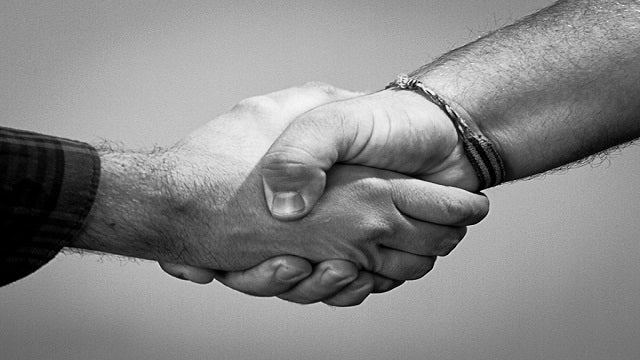 When you're in the heat of a negotiation it can seem almost impossible for you and your counterpart to see eye to eye. A recent study shows that breaking bread with your adversary during a negotiation can make the process run a little smoother.

Researchers at Stanford had study participants conduct various negotiations while food was brought to them.

"We told participants they were negotiating in either a competitive or a cooperative situation, and then we asked them to negotiate while they ate food that was either shared or individually served during the interaction. At the end of the exercise, we measured their perception of the interaction and assessed value creation by examining the joint gain created by the two parties. We used apples and caramel sauce in one study, and then we used chips and salsa in another study. What we found is that when people were negotiating in a competitive situation, sharing the food — and by that we mean sharing, not just eating — they created significantly more value. On the other hand, people negotiating in a cooperative situation created less value."

The researchers attributed the creation of more value in the negotiations by the juxtaposition of the social ritual of eating, and the competitive nature of the negotiation. Because of this the participants ended up paying more attention to each other and came across opportunities to create more value during their negotiating that otherwise would have been overlooked.

You should note that this works best for competitive negotiation, which would mean a scenario where you are only concerned with what's best for you. So, next time you plan on going toe to toe in negotiations, think about doing it at a nearby restaurant.