The Performance Benefits Of Discrete Video Cards (Even For Non-Gamers) 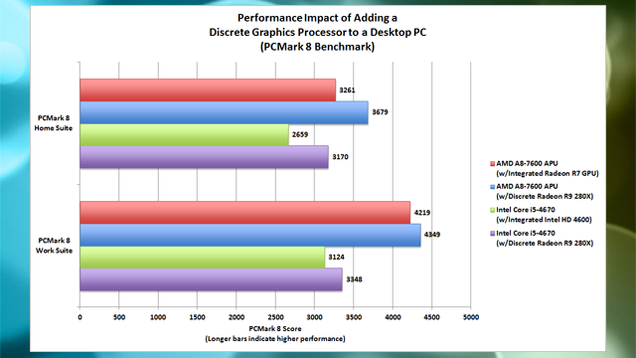 If you’re a PC gamer, you know that upgrading your computer’s video card will give you the best gaming performance boost. PCWorld argues, however, that a discrete graphics card belongs in most people’s desktop PCs — not just gamers.

AMD’s and Intel’s integrated graphics (graphics technologies coupled with the processor) are pretty capable these days, but they’re still far less powerful than discrete video cards when it comes to performance — and not just in games either:

Games aren’t the only applications that benefit from the power of a discrete GPU. AMD’s and Nvidia’s GPUs are made up of thousands of processors that can carry out multiple operations simultaneously. Any application that benefits from such parallel processing — be it an image-editing program like Photoshop, data-encryption software, or a distributed-computing project like [email protected] or [email protected] — will run faster with the assistance of a more powerful GPU.

PCWorld’s tests show performance boosts of 3 per cent to 19 per cent on PCMark’s productivity benchmarks when using discrete graphics cards (a ~$300 AMD Radeon R9 XFX card) versus integrated ones in the same systems. The greatest boosts were for the home suite than the work suite.

Even casual, browser-based games like Farmville and Angry Birds would have significant performance gains (about 1.5 to 2X the performance) from a discrete video card upgrade. The only place they didn’t seem to help was in video playback.

Of course, plunking down hundreds of dollars for a new video card won’t be worth it if the rest of the system is a bottleneck (an older processor or not enough memory). And there are other upgrades that will give you more bang for your buck, depending on your usage.

The tests suggest, though, that a discrete video card might not be just for gamers. Keep that in mind if you have the cash and are upgrading or building your own desktop PC to future proof it.

Tested: Why almost every desktop PC could use a video card upgrade [PCWorld]