Teach Children Gratitude By Making Them Work For Toys And Food 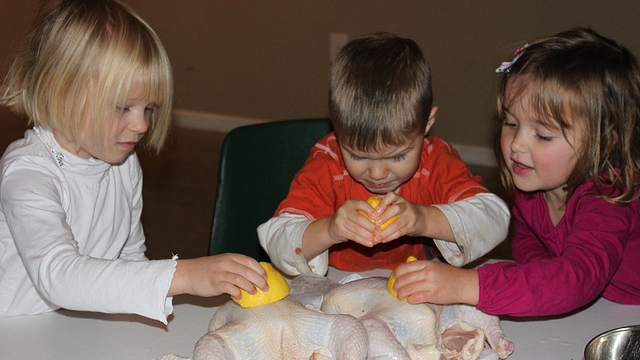 Many parents like to spoil their kids with toys but don’t want their kids to end up “spoilt”. The Atlantic’s Jenn Choi found a great solution: use toys and cooking to teach children gratitude.

The first strategy, which helps for picky eaters, is to have them help prepare meals, from shopping with you for food to cutting up vegetables or doing the actual cooking. (Let them add “secret” ingredients if it helps.) Choi found that her nine-year old son beamed with pride after grilling his first hamburgers.

Her second clever strategy was to use Lego to teach a lesson about money and shopping smarter:

My first instinct was to swear off Lego, but I have always resolved to be fair and honest with my kids. To pretend to not be able to afford certain things is not a good lesson either and hardly will teach them gratitude. I decided to make them more grateful for their current collection and get them to see them as a strategic investment.

Once at the Lego store, we headed to the Pick A Brick Wall. They watched other children dumping handfuls of bricks into containers that customers could buy for a fixed price ($7.99 for the small and $14.99 for the large). My kids were about to do the same but I asked them to be more mindful about what they wanted to make and how many bricks they could actually fit into the container. This was incredibly difficult for them.

I gave the kids two options: get the small container and not be questioned about its contents or the bigger container but only if they followed my lesson on being resourceful. I would pay for only one option. They chose the latter. So to gain the most value for our money, I asked them to snap a row of same-colour bricks together and then carefully place them into the container. It was a time-consuming process, best done sitting on the floor of the store.

By snapping the bricks together before putting them in the container, the kids were able to fit a lot more pieces in. It was also hard work that made Choi’s children appreciate their bricks even more and take better care of them.

Gratitude is such an important attitude and habit to have — and a very worthy one to teach.

How to Teach Kids to Be Grateful: Give Them Less [The Atlantic]