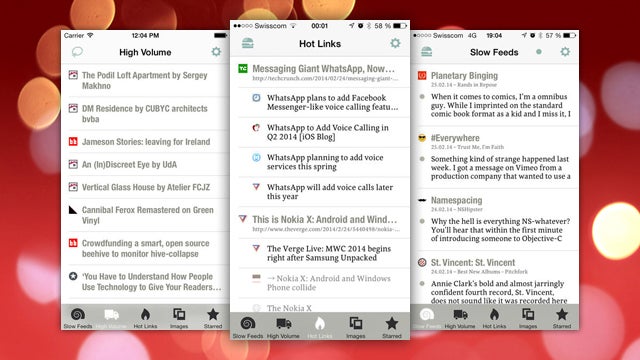 iOS: If you subscribe to a lot of RSS feeds, you know it can be tough to keep up with them. Good sites that don’t update often may get lost in the crowd, and even fast-moving sites can move so fast that good articles get buried. Slow Feeds automatically organises your feeds to bring that good stuff up front.

Slow Feeds organises your subscriptions into different lists. There’s a stream for low-volume sites that don’t update terribly often (sites that update, weekly, for example, but you want to read them when they do), a stream for the remaining high-volume sites that you can check more regularly, a stream specifically of the most-linked web pages in your feeds, and even a special feed just for articles you’ve starred to save for later. There’s even a gallery of all of your feeds’ article images, for those of us who like looking at pictures.

Best of all, Slow Feeds does all of this automatically. The app syncs with a number of other feed-reading services, including Feedly, NewsBlur, Feed Wrangler and Feedbin, so you don’t have to give up the service you’re using just to use Slow Feeds. The app also lets you save and share articles with Pocket, Instapaper, Pinboard, Facebook, Twitter and others. Slow Feeds is free, but some features are only available via a $3 in-app purchase. Hit the link below to read more.