Migrate Your Data From Evernote To OneNote With This Tool 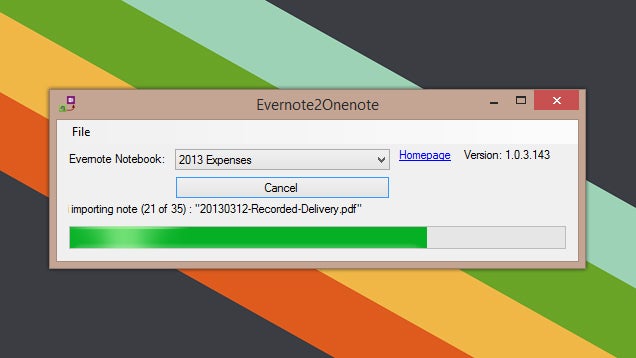 Windows: For those of us who need an internet-assisted brain, note taking apps are an invaluable tool — and now that OneNote has stepped up its game (and is free), you may be thinking about switching. Free app Evernote2Onenote will migrate your data for you.

Evernote can already import OneNote data, but OneNote doesn’t have anything built-in for Evernote users. Thanks to developer Stefan Küng, there’s a simple option for Windows users. It works with OneNote 2013, and you’ll need that and the latest version of Evernote installed for the program to work.

Each Evernote notebook will be imported into OneNote 2013 as a separate OneNote notebook file, and Evernote stacks aren’t supported. So you may want to do some consolidation of notes afterwards, but overall it works quite well. There is a minor bug whereby the program does not report that it has completed importing, but rest assured, it’s working.

Hit the link below to try out Evernote2Onenote for yourself. Also note that there is a similar program called “Ever2One” that we don’t recommend — it no longer works and throws up a suspicious looking LinkedIn login page during operation. So be sure to download the one from the link below.