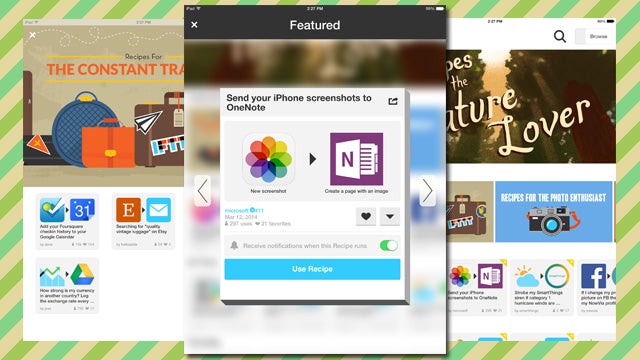 iOS: If This Then That’s iPhone app is already an easy way to automate all kinds of things on your phone, and now the app is available on the iPad. Alongside the new iPad version also comes a new collections feature and new triggers.

As with the iPhone version, you can create IFTTT recipes that tap into your iPad’s apps. For example, you could set up a trigger so your iOS photos automatically upload to Dropbox. For the most part, the iPad version of the app works identically to the new iPhone version, except that it’s scaled up on the bigger screen. IFTTT also added a new collections feature to the iOS apps where you can browse recipes based on type. For example, you can look at recipes catered to photographers, travellers or nature lovers.

Also new is a notifications channel where you can send custom notifications to your iOS device based on recipes, as well as a new photos trigger where a recipe runs when you take a photo in a specific area.