How to Pick a Houseplant That Will Survive in Your Kitchen

How to Get Rid of That Musty ‘Basement’ Smell

How to Talk to Someone Who Intimidates You

Why You Shouldn’t Mow a Wet Lawn

How To Fix LinkedIn’s Biggest Annoyances 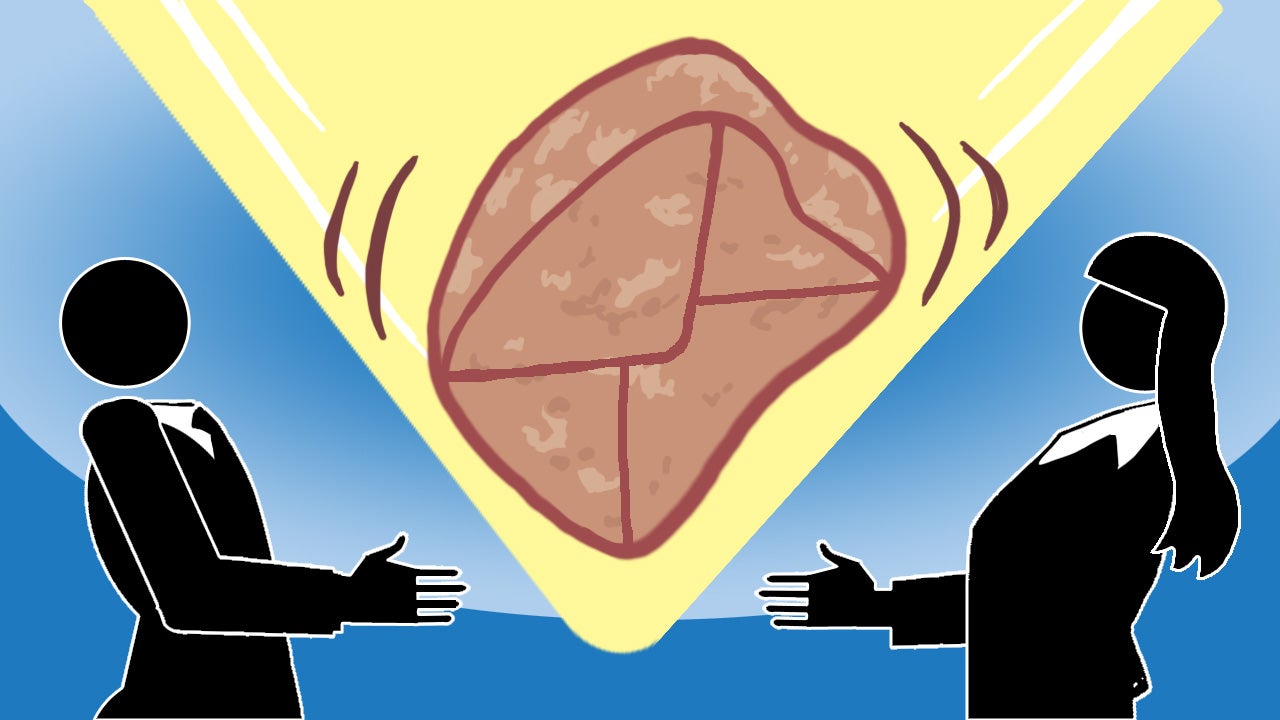 Love it or hate it, LinkedIn is the leading social network for your career, whether you’re looking for a job or just want to stay in touch with others on a professional level. It’s also incredibly frustrating to many of us. Here’s how you can make LinkedIn less annoying and more useful.

All social networks have their fair share of annoyances and critics, but LinkedIn appears to have the most (or at least most vociferous), with complaints about the service ranging from it being “useless” to “spammy” and “creepy”. Just like getting past our biggest pet peeves about Facebook, Twitter and Google+, though, there are solutions or workarounds for LinkedIn.

Annoyance #1: SO Many Emails

Join LinkedIn and it seems like you’ve signed up for an endless stream of spammy emails. Emails saying “please add me to your LinkedIn network”, “Jobs at your company”, “Congratulate This Person and 3 others” and “News about Some Other Person and more happening with your network”. If any little thing happens to any possibly connected person to you on LinkedIn, it’s going in your inbox. The ratio of email notifications you get from LinkedIn to the amount of time you spend on the service is absurd.

There’s a simple kill switch: This bookmarklet that turns all of the email settings to “no email” in LinkedIn. That’s the nuclear option — no emails at all for any type, but there could still be relevant emails you do want to get out of your spam folder and into your inbox (without having to set up complex filters).

To change the frequency of specific types of emails, go to your LinkedIn settings by hovering over your profile photo on the top menu, then Privacy & Settings. In the Communications section, choose “Set the frequency of emails”. There you’ll be able to restrict emails by category to individual email messages, a weekly digest, or no email. (Here’s a more in-depth explanation and tips in video form from my LinkedIn in 30 Minutes publisher.)

I’d set only the emails that are directly to you from other LinkedIn members in your network (those under “Messages from other members”) as individual emails and the rest as either weekly digests or no email to keep the inbox spam to a minimum.

Annoyance #2: Too Much Automatic Sharing 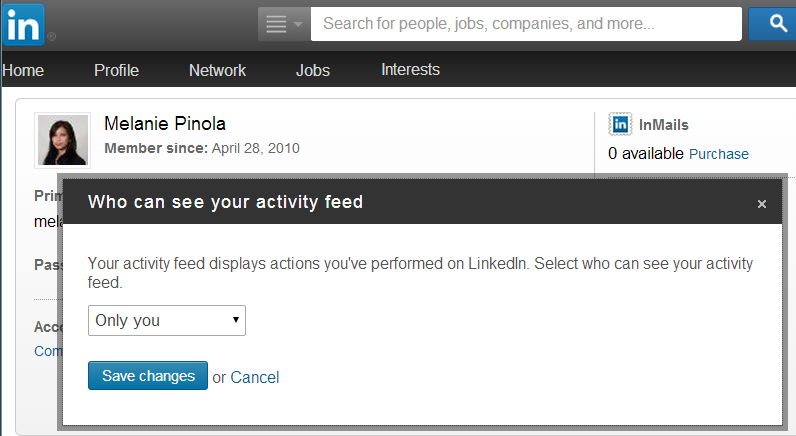 You know those annoying email notifications (or notifications in LinkedIn) that say “It’s John Doe’s first anniversary at IBM, say congratulations”? Well, chances are, LinkedIn is sending the same kind of weird notices about you to everyone in your network. They probably understand this is par for the course, but it would be nice if you didn’t have all that spam associated with your name.

Turn off activity broadcasts: If you edit your profile title at all, LinkedIn assumes you’ve landed a new job and will email your network to say congratulations — even if you’re just tweaking your profile. In cases when you’ll want to keep your job hunt mum (or aren’t even looking for a new job but just editing your profile), you’ll want to turn off the activity broadcasts under your Privacy Controls settings. This also hides updates such as when you follow companies on LinkedIn or make recommendations for others on the network.

Select who can see your activity feed: Similar to activity broadcasts, LinkedIn also has a separate feed for things like comments, likes or status updates on LinkedIn (much like Facebook’s “Your friend liked this page,” except sort of creepier on LinkedIn. That’s perhaps because it’s more acceptable for oversharing to happen on Facebook, whereas with LinkedIn, which most of us hardly use, you’re technically connected to people you don’t really feel connected to.)

If you want to stop your activity updates from being sent to others on LinkedIn, hover over your profile photo to go to your settings, and then under Profile > Privacy Controls change “who can see your activity feed displays”. You can change it to only you, your network, your connections (people with whom you’ve directly connected on LinkedIn), or everyone.

Annoyance #3: Lots Of Paranoia And Stalking 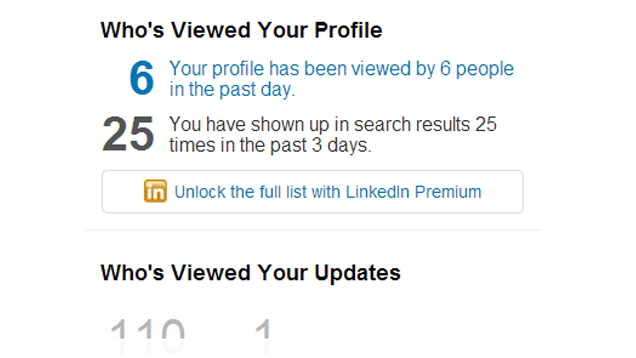 LinkedIn is the only social network that tells you how many people have viewed your profile and will actually tell you their names (if their settings allow). It seems they even want to encourage this sort of “who’s been looking at my profile” paranoia by adding it as a navigation item under your profile menu. By tracking and sharing profile views, though, this feature on LinkedIn also means that if you check someone out on LinkedIn, they could know about it too. Other creepy stalking features include mysterious suggestions for people you might know on LinkedIn (without any obvious contact connections).

Change what’s shown when you view someone’s profile. Don’t want your co-worker to know you were checking out her profile? Go to settings (hover over your profile) and under Profile > Privacy Controls, “change what others see when you’ve viewed their profile”. When you visit someone else’s profile, you’ll show up as either detailed (your name and headline), just your industry and title, or totally anonymous. But it’s tit for tat: If you make yourself anonymous when you view others’ profiles, you won’t get more details on who has looked at your profile in the stats.

Block someone from LinkedIn. This is a relatively new feature — introduced this year on LinkedIn — that could help with the spam and stalking. Blocking keeps you and the other person from accessing the other person’s profile, messaging each other, and seeing the content each of you has shared. To block someone from LinkedIn, go to their profile and click the down arrow by their name and select “block.”

LinkedIn endorsements and recommendations are so easily and mindlessly handed out, at this point, no-one trusts them. In fact, it’s one of the service’s major irritations — being asked to vouch for someone else’s Adobe Creative Suite skills, for example, or getting endorsements for skills you don’t have by people you don’t really know.

Turn off LinkedIn endorsements. Stop those annoying endorsement popups for your network with this setting. You can also remove endorsements from your profiles that aren’t relevant by going to Profile > Edit Profile and click on the edit button next to “Skills & Endorsements.” That way, you can at least curate it so it isn’t full of stuff that doesn’t matter.

Do you know even three people who say they actively use LinkedIn? The social network has a very broad reach (over 225 million LinkedIn members worldwide) but not much engagement; folks mostly use it for job seeking and recruitment purposes, rather than hanging around to share things in a non-promotional way. The site’s emphasis lately on promoted news articles or blogs from influencers only makes it more confusing for people who don’t really use the network or understand that it’s not Facebook.

LinkedIn has usability problems (the cluttered interface doesn’t help), but it’s still a very important tool we can’t ignore. Coder Trisha Gee points out a few reasons why LinkedIn can be enormously useful, even if you’re not currently job hunting — and, perhaps more importantly, the etiquette that could help make LinkedIn a better place. (Please, don’t spam everyone with connection requests, at least without reminding us who you are.)

Even if no one in your close circle is using LinkedIn actively, though, there might be someone you know who is connected to someone they know on LinkedIn who might know someone else who could make all the difference in your next career. That’s pretty much the power of LinkedIn and why you shouldn’t give up on it even with its many annoyances.