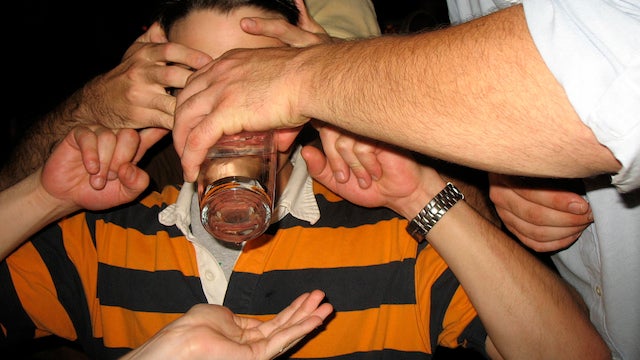 Nobody likes hiccups, and pretty much everyone has their own set of homemade remedies for curing them. The BBC takes a look at the two mechanisms that make these home remedies work.

Laughing, drinking a lot of alcohol, eating something fast, or just a weird, spontaneous reaction can cause a spasm in your diaphragm, which makes air rush to your lungs, causes your vocal chords to suddenly close, and makes the "hic" sound of a hiccup. They're obnoxious, annoying and seem to always happen at the most inopportune times. There's no true cure for hiccups, but home remedies that actually work fall into two categories:

In the first group are the methods that raise the levels of carbon dioxide (CO2) in the blood, inhibiting spasms of the diaphragm. These techniques include holding your breath or breathing into a paper bag. They can work sometimes, but researchers are unsure why. Some think it's a way of distracting the body so that it worries about the build up of CO2 instead; others have proposed that hiccups may be caused by low levels of CO2 in the first place, and therefore high levels would inhibit the hiccups...

An alternative hiccup remedy is to do something that stimulates the vagus nerve that runs from the brain to the stomach, coordinating breathing and swallowing. This nerve is implicated in the hiccupping process, but you can disrupt the chain of events by stimulating the nerve so that it sends signals to the brain telling it to attend to this new sensation instead. This is where remedies such as gulping water, biting a lemon or eating crushed ice come in. Similarly, pulling the tip of your tongue, putting your fingers in your ears or gently pressing on your eyeballs can all stimulate the vagus nerve. Think of it as distracting the body from your hiccups by making something else dramatic happen to it. The same logic applies to giving someone a fright.

Basically, scientists aren't totally sure why hiccup cures work, but the lesson is that if something works for you, continue doing it. Our own Adam Dachis has had the best luck with apple cider vinegar, which seems to fall into the second mechanism, but everyone has their own set of cures.