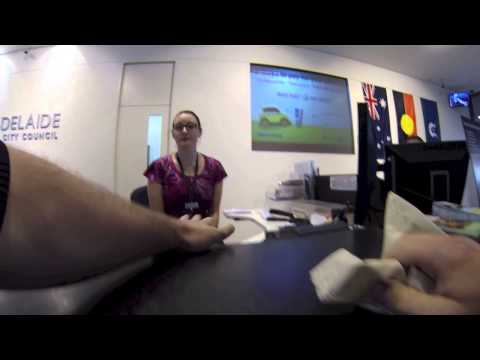 As you can see from the above footage, things didn’t really go according to plan for the shrapnel crusader. His payment was staunchly refused and no receipt was given — he basically threw away $60 and still has an unpaid fine on his record.

A lot of the comments on the YouTube page claim that the council is being unlawful and that any Australian currency must be accepted. This is actually untrue, however. ﻿

In fact, businesses aren’t even obliged to accept Australian banknotes, let alone loose change. Simply put, refusing to accept a payment using legal tender status is not against the law.

Here’s what the Reserve Bank of Australia’s website has to say on the topic of using coins as legal tender:

A payment of coins is a legal tender throughout Australia if it is made in Australian coins, but this is subject to some restrictions about how much can be paid in coin. According to the Currency Act 1965 (section 16) coins are legal tender for payment of amounts which are limited as follows:
[clear] [clear]

[clear] [clear]
For example, if someone wants to pay a merchant with five cent coins, they can only pay up to $5 worth of five cent coins and any more than that will not be considered legal tender.

On the other hand, the RBA notes that refusing to accept legal tender to pay off an existing debt can cause consequences in legal proceedings — especially if no other means of payment/settlement was specified in advance. The guy in the video could conceivably find a loophole here, depending on how rigorous the council was in explaining his payment options.

That said, it’s extremely unlikely that a judge would rule in his favour given his obviously spiteful intentions. Plus, if the video was secretly recorded (as appears to be the case) he could find himself in additional hot water due to Australian privacy laws.

The reality is that businesses and councils can set themselves up to accept whatever payment methods they desire. If you want to launch a hollow protest against your parking fine, paying in silver coins isn’t the way to go.