Nintendo Returns To The 2nd Dimension With 2DS Console 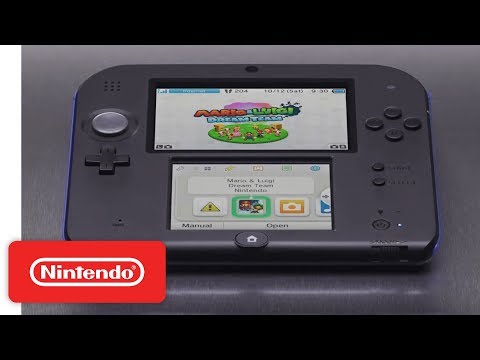 Nintendo is launching a new budget version of its perpetually-morphing DS in the lead-up to Christmas. As its name implies, the 2DS is a retro-shaped throwback to Nintendo’s original dual-screened console. It is compatible with all DS games (including 3DS) and will retail for $149.95. But is it one re-imagining too far?

Seemingly out of nowhere, Nintendo sprung its new console onto an unsuspecting gaming community early today. So far, the consensus has been decidedly mixed; particularly when it comes to its wedged shape and unconventionally rigid design (all previous versions of the DS have come with a folding screen). So what’s different?

The new version is compatible with all DS and 3DS games, although the latter will only be rendered in 2D. Oddly, the 2DS’s twin cameras will still be capable of taking photos and video in 3D but you’ll need a 3D-capable device to actually view the results. The inbuilt speaker has also been downgraded to mono, although the headphone jack is capable of outputing stereo. Otherwise, the main differentiator is the chunky design and cheaper price tag.

“We expect consumers to use it just the way they use a current 3DS,” Nintendo’s US president Reggie Fils-Aime said. “And, really, from a target standpoint, this is designed for that entry-level gamer. For a family of four with two kids, now you’ve got a more affordable choice with Nintendo 2DS.”

Hmmm. While it’s nice to see a more affordable handheld on the market, we can’t say we’re very big fans on the design. The folding mechanism of all previous DS consoles offered better protection for the screens and buttons and also provided better portability. The 2DS unfortunately loses these benefits. (In a bid to solve the first issue, Nintendo has created a carry pouch accessory especially for the 2DS, but you’ll need to buy this separately.)

In addition, the non-clamshell design really rams home the extra real estate required by the second display — it’s essentially a big ol’ square. This is especially galling when you consider that many games fail to utilise the bottom screen in any meaningful way.

The Nintendo will be available in a choice of red-and-white or black-and-blue. Check out the video at the top of the article to see Nintendo’s new console in action.

We’re eager to hear any gamers’ take on this new console. Does it represent a perfect stocking-stuffer for Christmas, or is it one re-imagining too far? Let us know what you think in the comments section below.