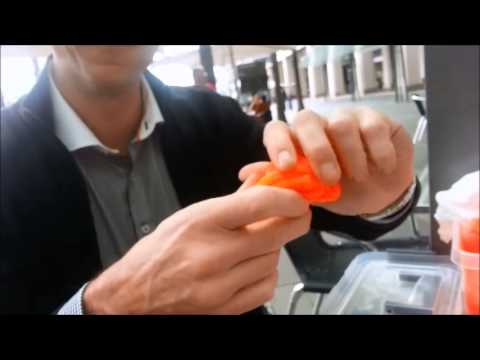 Tech21 is a manufacturer of mobile accessories specialising in ruggedised, shock-absorbent cases. In the following video, a Tech21 rep gives a demonstration of D30 which is used by military for impact protection on the battlefield — by laying into his own finger with a hammer.

D30 is an impact protection material made from dilatant non-Newtonian fluid. Its molecules lock together to absorb shock and disperse energy which translates to less damage to whatever/whoever is wearing it. Traditionally used in the military and extreme sports, the material has now made its way to phone cases courtesy of Tech21.

Earlier today, we were given a demo of D30 in its malleable, unfinished state. The plucky demonstrator put his own finger on the line to prove how shock absorptive is is. Check out the video below:

The Tech21 ‘Impactology’ range is currently available for a range of flagship handsets from Apple and Samsung, including the iPhone 5, Galaxy S4, iPad and Note II. You can find out more about the products at the Tech21 website. Select cases are currently available at Vodafone, Harvey Norman and Australian Apple Stores.