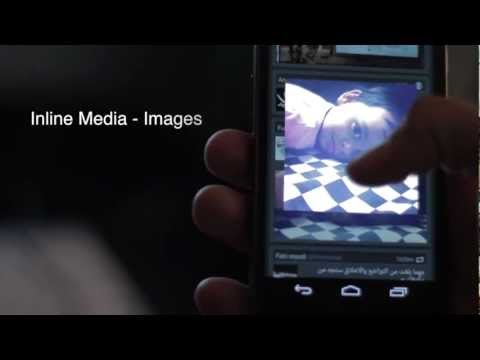 Update: Our previous pick for the App Directory was Twicca, and before that Twidroyd (now UberSocial), so if the comments below look a little out of place, it’s because we’ve updated our pick as time has passed to reflect what we think is the best Twitter app for Android.

The real beauty of Falcon Pro is that it’s one of those Twitter clients that keeps your focus right where it’s important: on your stream, your mentions and your DMs. Beneath an elegant interface is plenty of power and a wealth of features that let you customise your reading experience just the way you like it. Whatever your specific needs are, it’s likely that Falcon Pro can be tweaked to match: whether you want the font size to be just a little larger, or you want to be notified of mentions but not DMs, or you want the app to check for new DMs more frequently than mentions, or you need a home screen widget that’s transparent, or there’s something else.

The UI may be slim, but it’s super-fast, gesture-powered and a quick swipe to either side will reveal all the options you need. Like our previous favourite, Twicca, the UI does a great job of being readable without cluttering itself up with buttons and options right on the main screen. Long-press a tweet to see more options, including quick buttons to favourite, retweet, or reply and a menu button that leads to more choices (like deleting the tweet, muting/reporting/blocking the user, copying the tweet to your clipboard, or even translating the tweet into a different language).

The built-in browser is another of Falcon Pro’s greatest features. Once you get used to viewing links in the browser without having to load your phone’s primary web browser, you’ll never go back to just tapping a link and waiting for it to open in Chrome or Dolphin or another app. Since the in-app browser supports videos and photos, they’re just a single tap away as well and you don’t have to wait for a handoff between apps to enjoy what your friends have posted. Falcon Pro also supports Android tablets natively (without having to pay for a second, separate app), and it looks really good on them too.

Falcon Pro’s customisation options deserve praise as well. It’s not unusual for a Twitter client to let you tweak the text size and the font, but Falcon Pro’s settings and options are easy to use and easy to find again, and aren’t buried in a myriad of confusingly named settings. It may cost money, but it’s a far better Twitter client than the official one, and definitely the best we’ve ever seen.

Falcon Pro is impressive, but it’s not perfect. Of course, the obvious ding on Falcon pro is the price, but that’s not really a fair ding. Sure, most other Twitter clients are free, but seriously, Falcon Pro is only $1.91. At the same time, Falcon Pro comes without ads, without “promoted tweets” or “sponsored” crap served up by Twitter, and you have complete control over muting and blocking anyone and any tweet from your timeline.

Falcon Pro also doesn’t support multiple accounts, which is a bit of a bummer and a more serious ding if you’re someone who has to manage a business account or you work for a brand and do their tweeting. Even if you have a blog and want to be able to check that stream on the go, you’ll need a second app installed. In fact, multi-account support is in such high demand by Falcon Pro users, it’s the most popular feature request on the app’s public feature request page.

Falcon Pro is a great app, but if it doesn’t meet your needs for one reason or another, there’s are definitely alternatives.

Twicca (Free) was our previous favourite and it’s still good. We think Falcon Pro has outpaced it, but it’s free, a great Twitter app, supports tons of plug-ins that extend its features, and sports an even cleaner interface. It also comes with some features that Falcon Pro doesn’t have, like the ability to colour-code users and lists and a built-in image viewer that crosses applications — I’ve raved about it before, but imagine it: You click a link to any image, whether a straight image file or an image hosted at nearly any image hosting service, and it displays right over whatever you’re doing, without loading a new app or window. When you’re done, tap back to go right back to what you’re doing. Unfortunately, Twicca only supports a single account, and its widget is a bit limited.

Twitter for Android (Free) is the official Twitter client, and while it’s pretty feature bare and pales in comparison to almost everything else available, at least it’s semi-regularly updated and it supports multiple accounts. It’s probably enough for most people who just read Twitter and maybe post now and again, and it’s definitely useful to have around if you have multiple accounts to manage. Still, it’s lacking some of the advanced features that the independent apps have. Plus, you never have to worry that your favourite app is suddenly unavailable because the Twitter mothership decided to shut it down or cap its number of user access tokens.

Carbon (Free) is another great Twitter app that we’ve reviewed before, and I used it for a while before I eventually moved on to Falcon Pro. The interface looks great, and it uses a host of one-handed gestures to help you easily navigate your stream, view profiles, and read your lists, mentions, and DMs. It supports in-line images, and those same gestures usually work on every screen, revealing more useful features every time. It’s Android 4.0+ only though, so if you have an older device, you’re out of luck.

Plume (Free, $4.59 Premium Version) is another solid option, although its users have been rebelling lately against the development path the app has taken. We still think the interface is great and the app offers a lot of filtering and customisation options and even has a similar colour-coding system like Twicca does. Images are loaded in-line, and the app is snappy and fast. However, Plume it felt a little limiting by comparison, never remembered where I stopped reading, posted notifications even after exiting the app and the app’s ads at the top of the timeline felt intrusive. Even so, it supports multiple accounts, supports tablets, has a great widget and looks sharp.

TweetDark (Free), is — stick with me here — based on TweakDeck, which is no longer available because of Twitter’s API upgrade, which was based on TweetDeck for Android, which is also no longer available because of Twitter’s API upgrade (and because Twitter decided to discontinue it). Regardless, TweetDark does work, even if TweetDeck logins don’t work, and if you want a nice, large UI without a ton of extra features, it’s worth a look. It does, however, support Facebook, multiple Twitter accounts, and FourSquare all in the same app, so if that’s important to you, check it out. It’s lightweight, fast, and free.

TweetCaster (Free, $4.75 Premium Version) takes an entirely different approach to your stream, and puts your tweets and media on tiles you can browse through and tap to enlarge. It’s a little like Google+, which isn’t a bad thing: it’s actually really good looking, especially on Android tablets, and the free version supports multiple Twitter accounts, Facebook accounts and packs in the features. Smart lists, photo filters before sharing, customisable interface, it’s all there. It’s ad-supported and the $4.75 pro version strips them out, but at least you can try all of the features for free first.

HootSuite (Free) is ideal for people who use social media a lot, have multiple accounts to keep track of, or have to have Twitter, Facebook, LinkedIn and other social networks in the same app. For everyone else, it might be a little bit much, and you might not care about things like stats and analytics around your tweets and Facebook posts. Still, it’s a good Twitter app, and it’s free. In the same vein, there’s always Seesmic (Free, $2.88 Pro Version), which also supports multiple accounts and Facebook, but it’s ad-supported unless you pay for the pro version, and combined with Twitter’s own ads, that’s a little rough, especially since you’re not getting that much for the money. Plus, Seesmic is regularly upgraded, but its UI and feature-set still feel like they’ve been outpaced by faster, better Twitter apps.

Lifehacker’s App Directory is a growing directory of recommendations for the best applications and tools across multiple platforms.