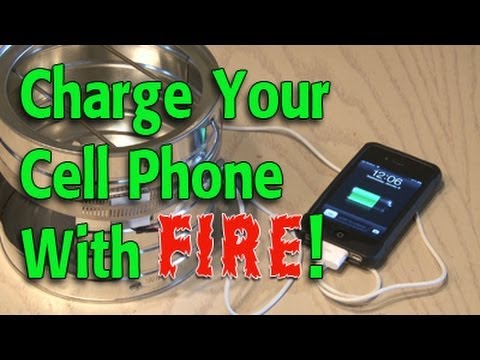 While the point of going camping is to get away from the bustle and disconnect from technology, you’re likely to take at least a phone with you for emergency purposes. Rather than invest in additional batteries so the device lasts the entire trip, you can build yourself a stove that doubles as a mobile charger.

DIY guru Kip Kedersha, otherwise known as “kipkay” on YouTube, goes through the construction of the quite simple device in the video above. The key to the project is a Peltier cooler, a component you can pick up from somewhere like Jaycar for around $12-$20. It converts heat or cold into electricity, which can then be used for whatever purpose you like. In this case, powering a phone.

The other pieces required are a coffee tin and coat-hanger, used to house the fire and serve as a grill top (of sorts), respectively.

It takes a while for the fire to get hot enough to allow the Peltier to power the phone, but it gets there in the end. A question that isn’t tackled by the video is how long it would take to actually charge a phone in this manner and how much fuel you’d go through to get to 100 per cent.

Still, it’s a surprisingly easy DIY project that would be genuinely useful out in the wilderness… as long as you can get a signal.

Charge your cell phone with fire [YouTube, via HackCollege]