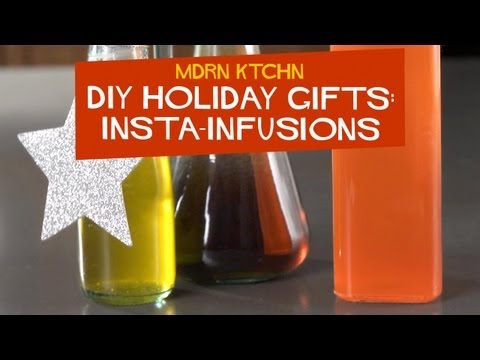 If you’re a fan of flavoured oils and liquors, you know it can take days or een weeks to really infuse the flavours properly. If you’re looking to speed up the process so you can give those infusions as Christmas gifts, here’s a way to get it done in just seconds.

The folks at CHOW and Modernist Cuisine have a method that requires a cream whip (available for around $US90 at Amazon). You’ll also need some nitrous oxide (N2O) chargers for the whip (about $US16 for 24 at Amazon) to get the job done. The siphon is designed for whipped creams and toppings, but it works great for infusions as well.

The video above shows you how it’s done: just combine your herbs or spices and the oil or liquor (or even maple syrup!) in the siphon, charge it, then release the pressure. It seriously only takes a few seconds. How the process works is a bit of a debate, but the going theory is that charging the siphon dissolves the gas into the liquid, and when you release the pressure, it forces the gas back out of the infusion as bubbles, breaking up the ingredients on a microscopic scale.

It’s definitely a shortcut, and I would love to compare an herb-infused oil made this way with my favourite two-week infusion. If it’s anywhere near as delicious, it’s worth the time saved. Hit the link below for the recipes mentioned in the video.